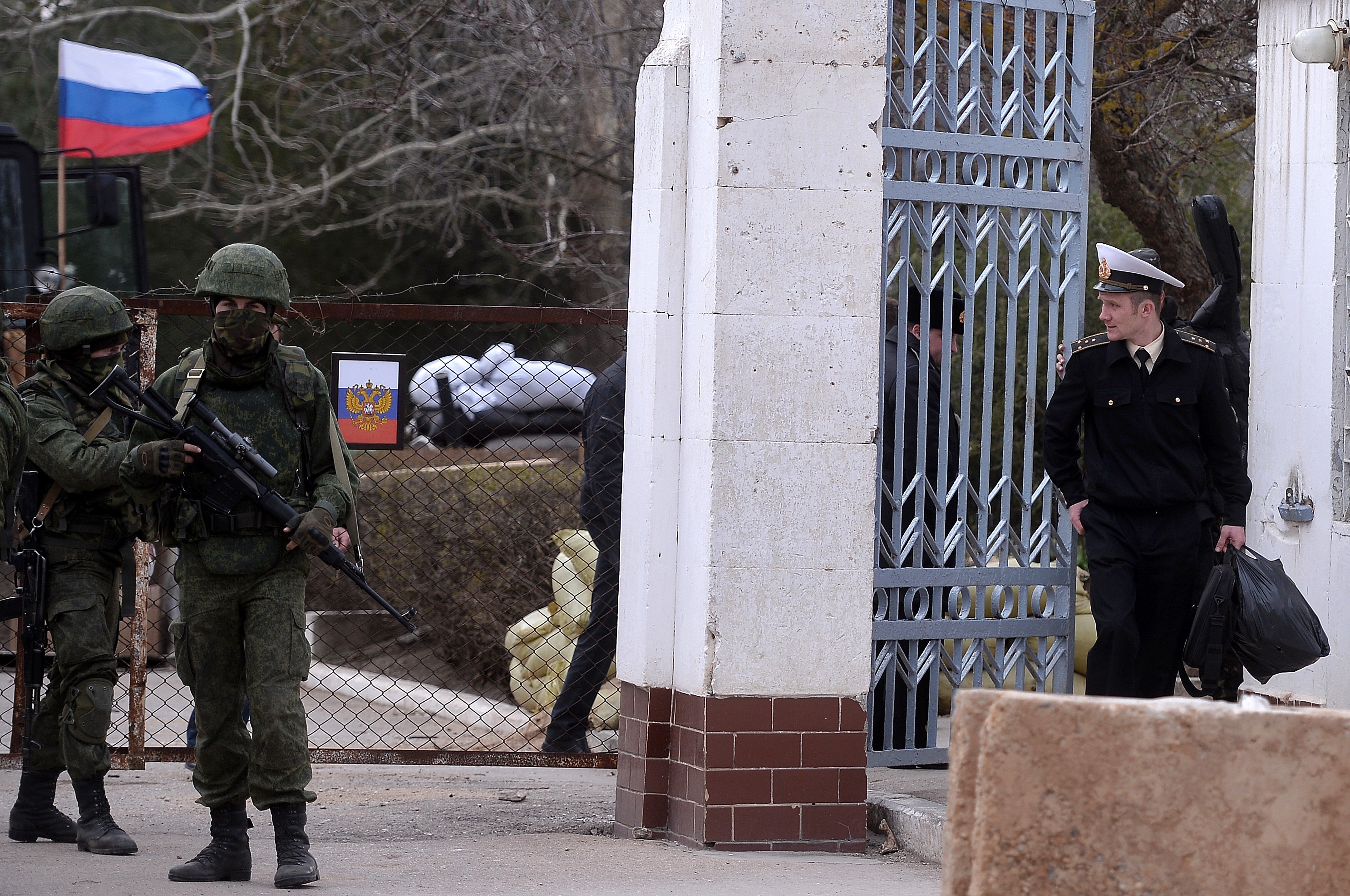 KIEV, Ukraine -- Russia faces further sanctions from the European Union on Thursday over its annexation of the Crimean Peninsula as tensions in the region remained high despite the release of a Ukrainian naval commander.

In an address to the German Parliament in Berlin, Chancellor Angela Merkel said the EU was readying further sanctions and that the G-8 forum of leading economies had been suspended indefinitely. Russia holds the presidency of the G-8 and President Vladimir Putin was due to host his counterparts, including President Obama, at a summit in Sochi in June.

"So long as there aren't the political circumstances, like now, for an important format like the G-8, then there is no G-8," Merkel said. "Neither the summit, nor the format."

In Washington, Mr. Obama announced new sanctions against 20 senior Russian government officials and influential individuals who provide support to the Russian leadership as well as a Russian bank.

"Russia must know that further escalation will only isolate it further from the international community," the president said in a televised statement from the South Lawn of the White House before traveling to Florida.

Mr. Obama also announced that he signed a new executive order Thursday morning granting the U.S. authority to impose sanctions on what he described as "key sectors of the Russian economy." The president didn't specify which sectors.

Earlier this week, the EU and the United States slapped sanctions on certain individuals that were involved in what they say was the unlawful referendum in Crimea over joining Russia. Moscow formally annexed Crimea earlier this week in the wake of the poll. The Black Sea peninsula had been part of Russia for centuries until 1954 when Soviet leader Nikita Khrushchev transferred it to Ukraine.

Russian forces effectively took control of Crimea some two weeks ago in the wake of the ouster of Ukraine's pro-Russia president, Viktor Yanukovych, after months of protests and sporadic violence. The crisis erupted late last year after Yanukovych backed out of an association deal with the EU in favor of a promised $15 billion bailout from Russia. That angered Ukrainians from pro-European central and western regions.

CBS News' Elizabeth Palmer reported from the Crimean capital of Sevastopol, however, that the combined pressure from the U.S. and Europe does not appear to be slowing down Russia's rush to annex the Black Sea peninsula.

Merkel said EU leaders would increase those "level 2" sanctions against Russia when they meet later Thursday in Brussels to widen the list of those whose assets are being frozen and who are banned from traveling.

She also reiterated that if things worsen, the EU is prepared to move to "level 3" measures, which would include economic sanctions.

"The European Council will make it clear today and tomorrow that with a further deterioration of the situation we are always prepared to take level 3 measures, and those will without a doubt include economic sanctions," she said.

Merkel's tough approach came as the commander of Ukraine's navy was freed after being held by Russian forces and local Crimean militia at the navy's headquarters.

Rear Adm. Sergei Haiduk and an unspecified number of civilians were held for hours after the navy's base in Sevastopol was stormed Wednesday. Early reports said the storming was conducted by a self-described local defense force, but Thursday's statement by acting President Oleksandr Turchynov, which confirmed the release, said Russian forces were involved.

Palmer reported that thousands of Ukrainian soldiers are still stranded at their posts, on bases and naval vessels all over Crimea, and they're hoping to avoid the humiliation of being driven out by their new and unexpected enemy, the Russians, with their possessions and their families.

Right now, as their new government in Kiev tries to figure out how to accomplish that, they have nothing to look forward to but uncertainty.

Attempting to face down the unblinking incursion, Ukraine on Wednesday said it would hold joint military exercises with the United States and Britain, signatories, along with Russia, of the 1994 Budapest Memorandum - a document designed to guarantee Ukraine's territorial integrity when it surrendered its share of Soviet nuclear arsenals to Russia after the Soviet Union broke up in 1991.

Just how many retreating troops Ukraine will have to absorb in what amounts to a military surrender of Crimea was unclear. Many servicemen have already switched sides to Russia, but authorities said they were prepared to relocate as many as 25,000 soldiers and their families to the Ukrainian mainland.

With thousands of Ukrainian soldiers and sailors trapped on military bases, surrounded by heavily armed Russian forces and pro-Russia militia, the Kiev government said it was drawing up plans to evacuate its outnumbered troops from Crimea back to the mainland and would seek U.N. support to turn the peninsula into a demilitarized zone.

Humbled but defiant, Ukraine lashed out symbolically at Russia by declaring its intent to leave the Moscow-dominated Commonwealth of Independent States, a loose alliance of 11 former Soviet nations. The last nation to leave the group was Georgia, which fought a brief war with neighboring Russia in 2008 and ended up losing two separatist territories.

UN Secretary-General Ban Ki-moon is visiting Moscow on Thursday and is to come to Ukraine on Friday.

"We are working out a plan of action so that we can transfer not just servicemen, but first of all, members of their family who are in Crimea, quickly and effectively to mainland Ukraine," said Andriy Parubiy, secretary of Ukraine's National Security and Defense Council.