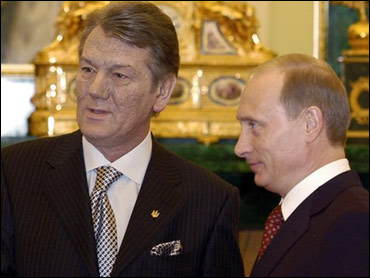 Yushchenko, who was inaugurated Sunday, initially said he would need more consultations before nominating a prime minister. His hesitation seemed to be aimed at avoiding a provocative decision just before his Moscow trip — his first foreign visit as president.

But after arriving in the Russian capital, Yushchenko's office said he had nominated Tymoshenko, 44, who is widely disliked by the Kremlin. Moscow supported Yushchenko's opponent in the presidential campaign, former Prime Minister Viktor Yanukovych.

With her trademark blond braid, Yulia Tymoshenko was Viktor Yushchenko's most visible ally in the "Orange Revolution," that paved the way for Yushchenko's victory in the fiercely contested presidential race that took two elections to settle.

But the 44-year-old firebrand opposition leader is dogged by corruption allegations from her time as head of a natural gas trading company, and Russia has twice sought her arrest.

For Yushchenko, the Kremlin meeting was part of his delicate balancing act to move closer to the West while not upsetting relations with his powerful neighbor. For Russian President Vladimir Putin, the meeting could help undo the damage of his unsuccessful foray into Ukrainian politics.

"I will not conceal the fact that it was not an easy campaign," Yushchenko said about the presidential poll.

While Yushchenko appeared reserved and at times nervous, Putin by contrast seemed to go out of his way to be friendly, smiling and warmly receiving the new Ukrainian leader.

"We are very happy that this difficult political period in Ukraine has passed, and that a government is in place ... and we expect that our relations will continue to develop," Putin said.

Russia views Ukraine as a key part of its historic sphere of influence, a major transit route for its oil and gas exports and a buffer between the expanding European Union and NATO. Moscow is nervous about Yushchenko's plans to quickly integrate the 48-million nation into Western structures.

"Our place is in the European Union," he said to a crowd estimated at more than 100,000 in Independence Square, where throngs of his supporters had gathered to protest fraud in the Nov. 21 runoff vote won by Yanukovych.

Nominated Monday to become Ukraine's prime minister, Tymoshenko's ringing calls to action were key to keeping thousands of demonstrators in the streets for weeks after Yushchenko was declared the loser in the fraudulent Nov. 21 election, which was later annulled.

In a recent interview with The Associated Press, Tymoshenko said her first tasks as prime minister would include reviewing the national budget and restarting Ukraine's efforts to join the European Union.

Ukraine's new leadership cannot go into the EU integration processes "half-ready," she said. "It is a bilateral process and Ukraine cannot decide by itself when it will join the EU."

She also pledged to review murky privatization deals that allowed rich coal and steel magnates from the east to accumulate considerable wealth in the years following the breakup of the Soviet Union.

"They skimmed off the best cream of Ukrainian industry. ... All factories that were more or less profitable were divided between them," she told the AP.

She was jailed briefly on charges of bribery, money-laundering, corruption and abuse of power while working for UES. She has dismissed the charges as politically motivated.

While the United States and other Western countries refused to acknowledge Ukraine's fraudulent Nov. 21 vote, Putin twice congratulated Yanukovych on his victory and bristled at opposition demands for a fresh rematch — a course that cast a cloud over Moscow's ties with the West.

In a promise clearly aimed at appeasing the country's large numbers of Russian-speaking people, many of whom fear his Ukrainian nationalist sentiments might lead to discrimination against them, Yushchenko said: "Everyone can teach his children the language of his forefathers."

He also has pledged to develop close economic ties with Russia, Ukraine's biggest trading partner and investor. Ukraine under Kuchma signed up as a key member of a planned joint economic space that would unite it with Russia, Belarus and Kazakhstan in an arrangement that aims to harmonize tax, customs and other trade links.

Yushchenko hasn't made clear whether he intends to pursue the agreement, saying only that Ukraine would have to ensure that its national interests are met.

After his trip to Moscow, Yushchenko is to embark on several days of visits to Western European countries including an appearance at the European Parliament to push his drive for closer ties. But the EU has made it clear that Ukraine is not yet in line to become a member.

Yushchenko has promised to turn the country around after years of corruption, widespread at almost every level of government, and he pledged to safeguard freedom of speech.