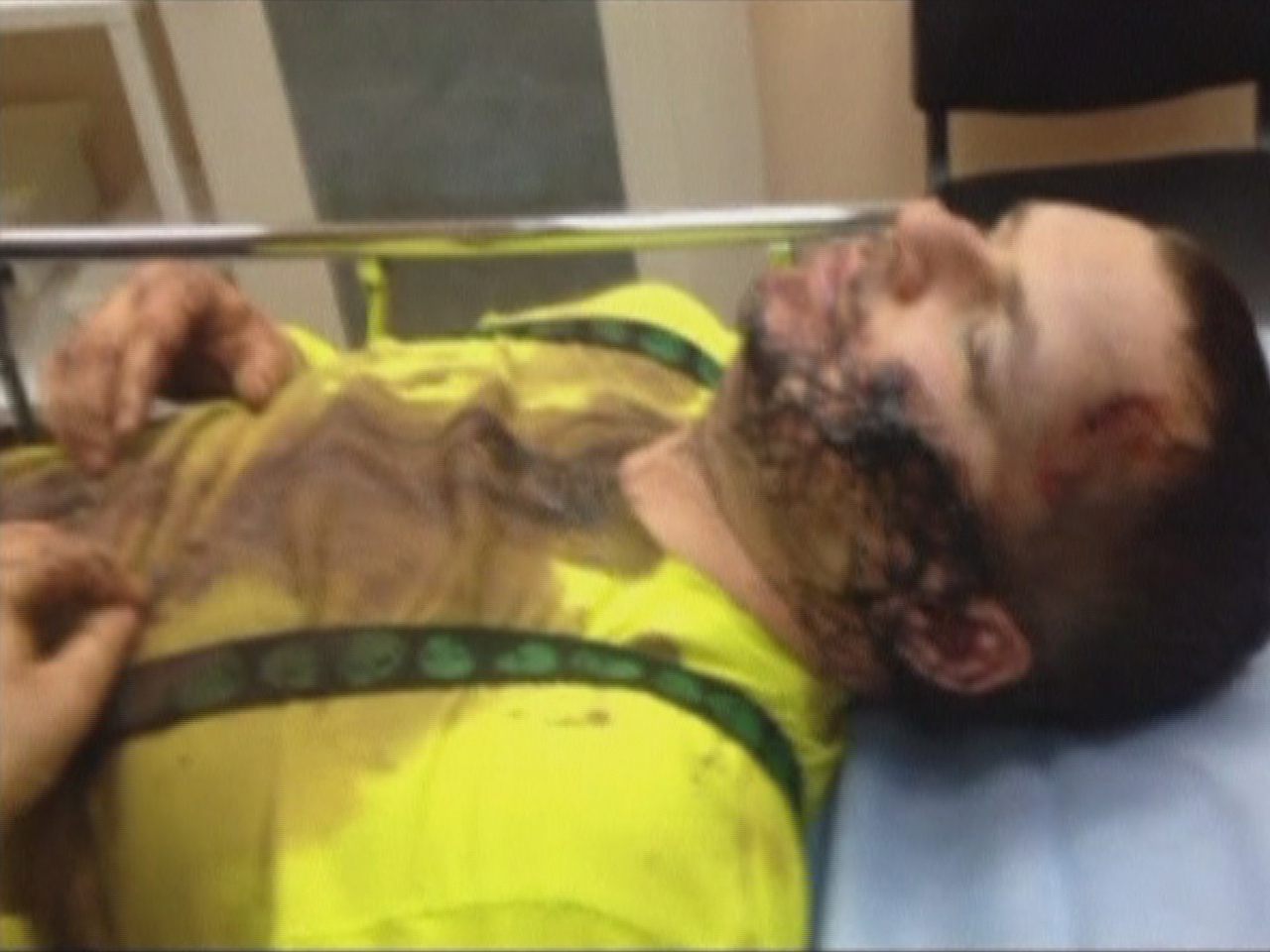 KIEV, Ukraine -- The bloody images of Ukrainian opposition supporter Dmytro Bulatov, who says he was abducted and tortured for more than a week, have fueled fears among anti-government activists that extrajudicial squads are being deployed to intimidate the protest movement.

Bulatov, who was in charge of a vocal protest group before he disappeared Jan. 22, recounted a gruesome ordeal, saying his unidentified kidnappers beat him, sliced off part of his ear and nailed him to a door during his time in captivity.

"There isn't a spot on my body that hasn't been beaten. My face has been cut. They promised to poke my eye out. They cut off my ear," Bulatov, 35, said Friday in a short video from his hospital ward. "They crucified me by nailing me to a door with something and beat me strongly all the while."

The government has faced two months of major protests that started after President Victor Yanukovych backed out of an agreement to deepen ties with the European Union in favor of Russia. The demonstrations quickly grew into discontent over heavy-handed police, corruption and human rights violations.

CBS News correspondent Holly Williams reports from Kiev that the protesters have stayed outside in sub-zero temperatures because they believe these demonstrations will decide the future of their country and whether Ukraine turns east toward Russia or west toward Europe.

Some opposition leaders believe the government will do anything to save itself, including sending brutal squads of torturers to quash the demonstrations.

Prominent opposition figure Oleksandr Turchynov accused the government of being behind the attacks on Bulatov and other activists.

Later Friday, the ministry dispatched investigators to Bulatov's hospital to interrogate him, saying that besides being a kidnapping victim, he was also suspected of organizing mass disorders in the protests. Opposition lawmakers and Bulatov's supporters feared he was about to be arrested and rushed to the hospital to shield him from police. The standoff continued late into the evening.

Yanukovych adviser Hanna Herman urged a thorough investigation into Bulatov's disappearance. But she also branded Turchynov a "provocateur" and accused the opposition of seeking to further inflame tensions instead of working toward a compromise in the protests, which call for Yanukovych's resignation and other demands.

"I think the opposition now is doing all it can to again ignite the situation which had already begun to calm down," Herman told the Associated Press.

Bulatov's group, car owners known as Automaidan, started out by picketing the residences of top government officials and their allies, but soon took an active part in the protests that have rocked Ukraine. They blocked streets and monitored police cars.

Bulatov went missing on Jan. 22, prompting his friends to organize a campaign for his release. They pleaded with top government officials for assistance, offered a $25,000 bounty to anyone who could help locate him and even consulted psychics, fellow activist Oleksiy Hrytsenko said.

Hrytsenko grew all the more worried about Bulatov's fate because Automaidan members' cars were being torched and their activists detained, harassed and threatened. Hrytsenko showed an Associated Press reporter a text message he received from an unknown number that read: "Go ahead, go ahead, your mother will be happy to see her son dead."

Bulatov was dumped in a forest Thursday night after eight days in captivity and made it to a house outside Kiev where he got help and was able to call friends, according to an Interior Ministry statement. He went missing one day after Igor Lutsenko, another prominent opposition activist who had also disappeared, was discovered after being taken to woods and beaten severely by unknown attackers.

Lutsenko was kidnapped from a hospital, where he had brought a fellow protester, Yuri Verbitsky, to be treated for an eye injury. Verbitsky was also beaten severely along with Lutsenko and was later discovered dead.

An investigative journalist and an active leader of the protests, Tetyana Chernovil, was also badly beaten outside Kiev in late December.

Lutsenko says he spent some eight hours spread on the floor of what looked like a garage in an unknown location, as about 10 people beat him in a way to leave few visible marks, but to cause severe pain. All the while, the attackers interrogated Lutsenko about the protest movement, he said.

"They are very professional about beating people," Lutsenko said in a recent interview with a Ukrainian TV channel. "Their goal was to put pressure on us, to punish us."

The reported beatings and intimidation stoked speculation that special security teams were roaming Ukraine and hunting down opposition activists.

European Union foreign policy chief Catherine Ashton issued a statement Friday saying she was "appalled by the obvious signs of prolonged torture and cruel treatment" of Bulatov. She also condemned the death of Verbitsky.

"These are but two cases of the continuous deliberate targeting of organizers and participants of peaceful protests," Ashton said. "All such acts are unacceptable and must immediately be stopped."

Yanukovych took indefinite sick leave Thursday, stalling the negotiations between authorities and the opposition in a bid to find a way out of the political crisis.

Yanukovych told opposition leaders it was now up to them to make concessions, since he already accepted the resignation of Prime Minister Mykola Azarov and approved the scrapping of harsh anti-protest legislation that sparked last week's violence.

Yanukovych also signed into law a bill offering to grant amnesty to protesters, but only after they vacate scores of government buildings they have seized across the country.

The mysterious kidnappings of the activists also leave unclear the motives of those behind them, because each time they have only served to energize the protests.

"I would like to tell you that we will not be frightened we have no intention to stop," Bulatov said.