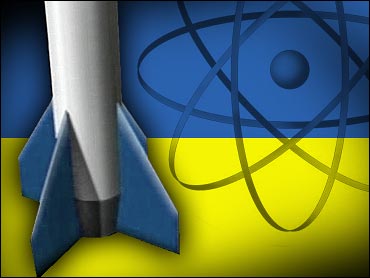 The Associated Press reported exclusively Feb. 4 that a government probe into lucrative illicit weapons sales by officials loyal to Kuchma had led to secret indictments or arrests of at least six arms dealers accused of selling missiles to Iran and China.

The Kh55 cruise missiles were smuggled out of Ukraine four years ago, the Prosecutor General's office said Friday in a statement. Prosecutors said the missiles, which have a range of 1,860 miles, were sold illegally and were not exported by Ukrainian enterprises.

"The proceedings against persons implicated (in the illicit sale) have been forwarded to the Kiev Court of Appeals and are being heard behind closed doors," the statement said. It was unclear how many suspects were named, and whether charges had been filed against them.

Last month, the AP reported that missiles purportedly ended up in Iran and China although export documents known as end-user certificates recorded the final recipient of some 20 Kh55 missiles as "Russia's Defense Ministry," according to a letter written by a lawmaker to current President Vladimir Yushchenko.

The letter by lawmaker Hrihoriy Omelchenko did not say what happened to the other missiles. The Kh55, known in the West as the AS-15, is designed to carry a nuclear warhead with a 200-kiloton yield.

The missiles allegedly sold to Iran were unarmed. The United States and other Western nations have accused Iran of trying to develop a nuclear weapons program, an allegation Tehran denies.

Iran does not operate long-range bombers but it is believed Tehran could adapt its Soviet-built Su-24 strike aircraft to launch the missile. The missile's range would put Israel and a number of U.S. allies within reach.

China is a declared nuclear weapons state. In Beijing, Chinese Foreign Ministry officials were not available for comment Friday.

Omelchenko's letter to Yushchenko and another to the prosecutor-general, Svyatoslav Piskun, refer to a Ukrainian Security Service report that details the allegations.

At least three people were arrested and another three were indicted last year in connection with the illicit arms trade, an intelligence official told the AP on condition of anonymity.

According to Omelchenko, in 2000 Russian national Oleg Orlov and a Ukrainian partner identified as E.V. Shilenko "exported 20 Kh55 cruise missiles through a fake contract and end-user certificate" with Russia's state-run arms dealer and with a firm called Progress, which is a daughter company of Ukrspetseksport — Ukraine's weapons exporting agency.

Yushchenko has promised to investigate illicit weapons-dealing, including a U.S. allegation that Kuchma approved the sale of a sophisticated Kolchuga radar system to Iraq despite U.N. sanctions against Saddam Hussein's regime. Kuchma denied the allegations.

On Feb. 25, a top defense official ordered officials to take an inventory of all military weaponry and equipment in Ukraine after two anti-aircraft missile systems were discovered missing from a military depot.

Petro Poroshenko, chief of Ukraine's Defense and Security Council, gave the military six weeks to perform a "total inventory," noting that it would be an "extremely difficult task" given the size of the country's weapons stores.