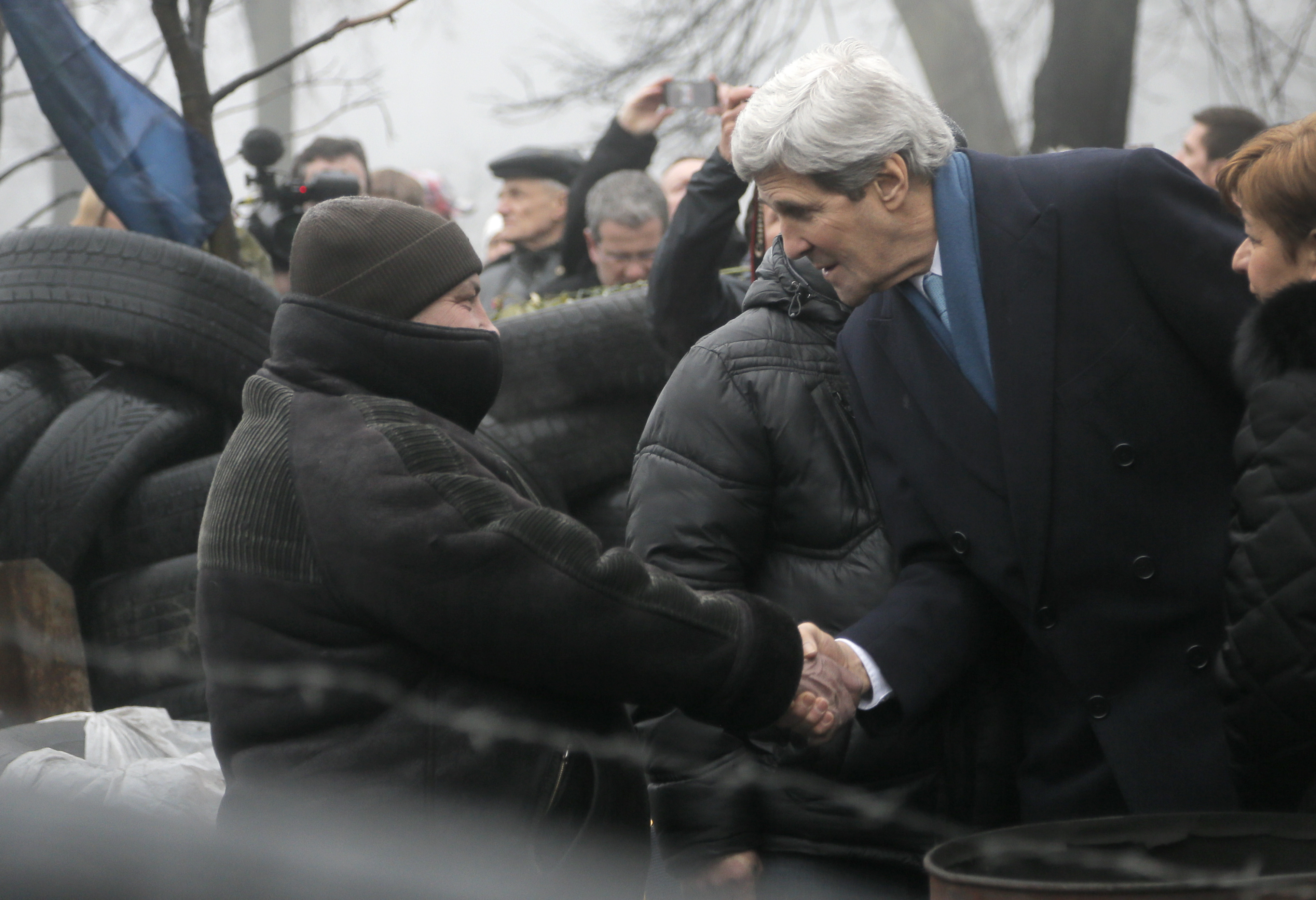 KIEV, Ukraine -- In a somber show of U.S. support for Ukraine's new leadership, Secretary of State John Kerry walked the streets Tuesday where nearly 100 anti-government protesters were gunned down by police last month, and promised beseeching crowds that American aid is on the way.

The Obama administration announced a $1 billion energy subsidy package in Washington as Kerry was arriving in Kiev. The fast-moving developments came as the United States readied economic sanctions amid worries that Moscow was ready to stretch its military reach further into the mainland of the former Soviet republic.

Kerry made a pointed distinction between the Ukrainian government and Putin's.

"The contrast really could not be clearer: determined Ukranians demonstrating strength through unity, and the Russian government out of excuses, hiding its hand behind falsehoods, intimidation and provocations. In the hearts of Ukranians and the eyes of the world, there is nothing strong about what Russia is doing." He said the penalties against Russia are "not something we are seeking to do, it is something Russia is pushing us to do."

Earlier, Kerry headed straight to Institutska Street at the start of an hours-long visit intended to bolster the new government that took over just a week ago when Ukraine President Viktor Yanukovych fled. He lay a bouquet of red roses, and twice the Roman Catholic secretary of state made the sign of the cross at a shrine set up to memorialize protesters who were killed during mid-February riots.

"We're concerned very much. We hope for your help, we hope for your assistance," a woman shouted as Kerry walked down a misty street lined with tires, plywood, barbed wire and other remnants of the barricades that protesters had stood up to try to keep Yanukovych's forces from reaching nearby Maidan Square, the heart of the demonstrations.

Piles of flowers brought in honor of the dead provided splashes of color in an otherwise drab day that was still tinged with the smell of smoke.

"We will be helping," Kerry said. "We are helping. President Obama is planning more assistance."

CBS News chief White House correspondent Major Garrett reports that with military options largely off the table, the key player for the administration in this is Treasury Secretary Jack Lew. He is putting together for the president a proposed set of economic sanctions and looking at ways to make life very tough for state-owned banks in Russia by blocking access to global financial markets. Garrett reports that Russia lost $60 billion in wealth on Monday due to market volatility related to all the instability in Crimea and larger Ukraine. The ruble has fallen more than 10 percent amid all this tension and the White House hopes all this economic damage will provoke Russian President Vladimir Putin to reconsider. Even so, Western nations led by Germany are reluctant to hit Russia, at least right now, with tough economic sanctions.

The Ukraine government continued to grapple with a Russian military takeover of Crimea, a strategic, mostly pro-Russian region in the country's southeast, and Kerry's visit came as Putin said he wouldn't be deterred by economic sanctions imposed punitively by the West.

U.S. officials traveling with Kerry, speaking on condition of anonymity, said the Obama administration is considering slapping Russia with unspecified economic sanctions as soon as this week. Members of Congress say they're preparing legislation that would impose sanctions as well.

As Kerry arrived, the White House announced the package of energy aid, along with training for financial and election institutions and anti- corruption efforts. Additionally, the officials said, the U.S. has suspended what was described as a narrow set of discussions with Russia over a bilateral trade investment treaty. It is also going to provide technical advice to the Ukraine government about its trade rights with Russia. The officials spoke on condition of anonymity because they were not authorized to be quoted by name before the official announcement was made.

Putin pulled his forces back from the Ukrainian border on Tuesday, yet said that Moscow reserves the right to use all means to protect Russians in the country. He accused the West of encouraging an "unconstitutional coup" in Ukraine and driving it onto anarchy, declaring that any sanctions the West places on Russia will backfire.

Speaking from his residence outside Moscow, Putin said he still considers Yanukovych to be Ukraine's leader and hopes Russia won't need to use force in predominantly Russian-speaking eastern Ukraine.

In Washington, the White House said the $1 billion loan guarantee was aimed at helping insulate Ukraine from reductions in energy subsidies. Russia provides a substantial portion of Ukraine's natural gas and U.S. officials said they are prepared to work with Kiev to reduce its dependence on those imports. The assistance is also meant to supplement a broader aid package from the International Monetary Fund.

"We come here to leave flowers and to walk the streets where there was a war," she said. "It's very painful for us. It was hard for me to see how the police ran after our people. I hope it will be our victory and be a better life for us. But it will be very hard for us because the economy is very bad."

The U.S. officials traveling to Kiev said Washington is warily watching to see whether Russia will try to advance beyond Crimea.

They cited reports of Russian helicopters nearly flying into mainland Ukraine airspace before being intercepted by jets controlled by Kiev. It's believed as many as 16,000 Russian troops have deployed to Crimea, while Ukrainian forces are amassing on both sides of an isthmus separating the region's peninsula from the mainland.

From the trenches of Ukraine, a warning about Putin's intentions
More