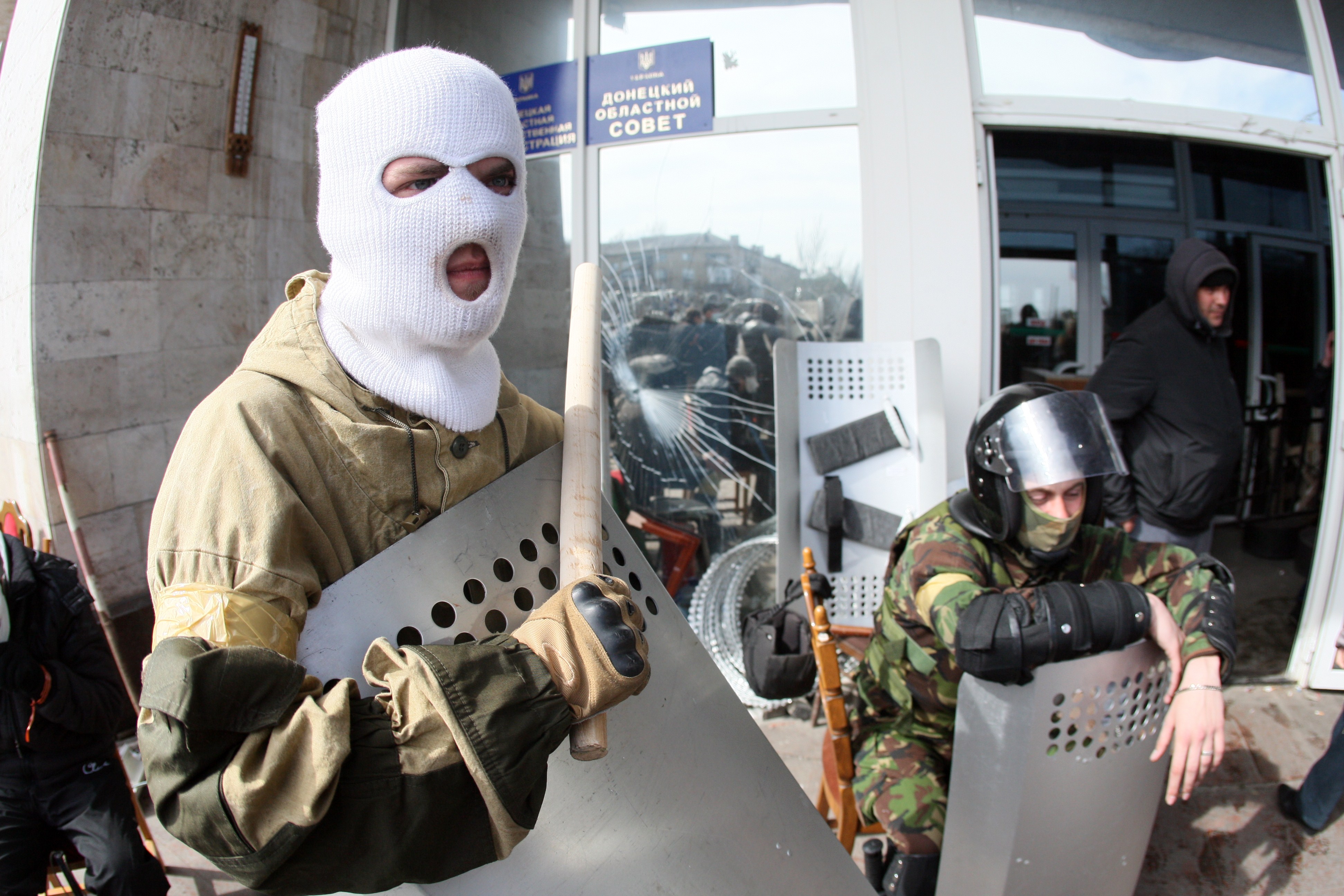 DONETSK, Ukraine - Pro-Russian activists barricaded inside a government building in eastern Ukraine proclaimed the region independent Monday and called for a referendum on seceding from Ukraine - an ominous echo of the events that led to Russia's annexation of Crimea.

The Ukrainian government vowed to quell the unrest, while Russia, which has tens of thousands of troops stationed along their joint border, warned Ukraine of more "difficulties and crises" if its leaders failed to heed Moscow's demands.

Pro-Russian activists who had seized the provincial administrative building in the city of Donetsk over the weekend announced the formation Monday of the independent Donetsk People's Republic. They also called for a referendum on the possible secession of the Donetsk region, which borders Russia, to be held no later than May 11, according to the Interfax news agency.

Russia annexed Crimea last month, following a referendum called just two weeks after the Black Sea peninsula had been overtaken by Russian forces. Ukraine and the West have rejected the vote and the annexation.

Outside the Donetsk building, a barricade of car tires and razor wire was built up to prevent police from retaking it. Other armed activists fired warning shots in the air and tried to seize the regional state television building in Donetsk but retreated Monday after police and guards in the building also fired warning shots in the air, Interfax cited police as saying.

Government buildings were also seized in two neighboring Russian-speaking Ukrainian cities - Kharkiv and Luhansk - and top government officials headed there to try to quell the unrest.

But as of late Monday, the buildings in all three cities remained occupied by pro-Russian activists whom authorities said were armed.

In Kiev, President Oleksandr Turchinov described the developments in eastern Ukraine as an operation undertaken by Russia to sow instability.

"Anti-terrorism measures will be adopted against those who took up weapons," Turchinov said, adding that parliament would convene Tuesday to consider tougher penalties for separatist actions and a ban on separatist parties.

Ukrainian Prime Minister Arseniy Yatsenyuk also accused Russia of staging the unrest to create a pretext for sending troops across the border.

"The plan is to destabilize the situation, the plan is for foreign troops to cross the border and seize the country's territory, which we will not allow," he said, adding that those taking part in the unrest had distinct Russian accents.

"If Russia moves into eastern Ukraine, either overtly or covertly, this would be a very serious escalation," Carney said.

"Those who thought that it ended with Crimea were wrong," Bildt said.

The Russian Foreign Ministry rejected the Ukrainians' allegations but reaffirmed its long-held demand that Ukraine should change its constitution to turn the country into a federation with broader powers for provinces. It added that such move should also underline Ukraine's non-aligned stance and ensure a special status for the Russian language.

"If the political forces that call themselves the Ukrainian government continue to take irresponsible attitude to the fate of the country and its people, Ukraine will inevitably face new difficulties and crises," the ministry said in a statement.

Yatsenyuk said Russian troops were stationed within 19 miles of the border.

Eastern Ukraine, which has a large population of ethnic Russians, was the support base for ousted President Viktor Yanukovych, who fled to Russia in February after months of protests. Both economic and cultural ties to Russia are strong here and many are wary of the new government, which favors closer ties to the European Union.

But Ukraine's interim authorities deny they are infringing upon the rights of ethnic Russians or Russian-speakers and there have been no evidence of them facing harassment in Ukraine.

The international community has expressed growing anxiety over the large Russian troop movements along the Ukrainian border. NATO says up to 40,000 Russian troops have mobilized and present a distinct threat to Ukraine. Russia says it has the right to move its troops wherever it wants on its own territory.

In a video posted on the Internet, an unidentified pro-Russian activist in the Donetsk government headquarters asked Russian President Vladimir Putin to send peacekeeping troops into the region.

"Without your support, without the support of Russia, it will be hard for us to resist the Kiev junta on our own," the man said, referring to the interim authorities that took power in Ukraine after the overthrow of Yanukovych.

But a senior Russian lawmaker suggested Monday that such a move was not imminent. Viktor Oserov, head of the defense committee in the Russian parliament's upper house, said Russia cannot send peacekeepers into Ukraine without a resolution by the U.N. Security Council, according to Interfax.

The ITAR-Tass state news agency cited the deputy speaker of Russia's upper house of parliament, Ilyas Umakhanov, as saying that the situation in Donetsk was not a replay of Crimea.

"I don't think this situation automatically reflects what happened in Crimea ... from the judicial, historical and legal points of view, it demands a separate assessment," Umakhanov said.

Russian news agencies also reported Monday that prosecutors have opened a criminal investigation into the death of a Crimea-based Ukrainian army major who was shot and killed by a Russian soldier in a scuffle Sunday.