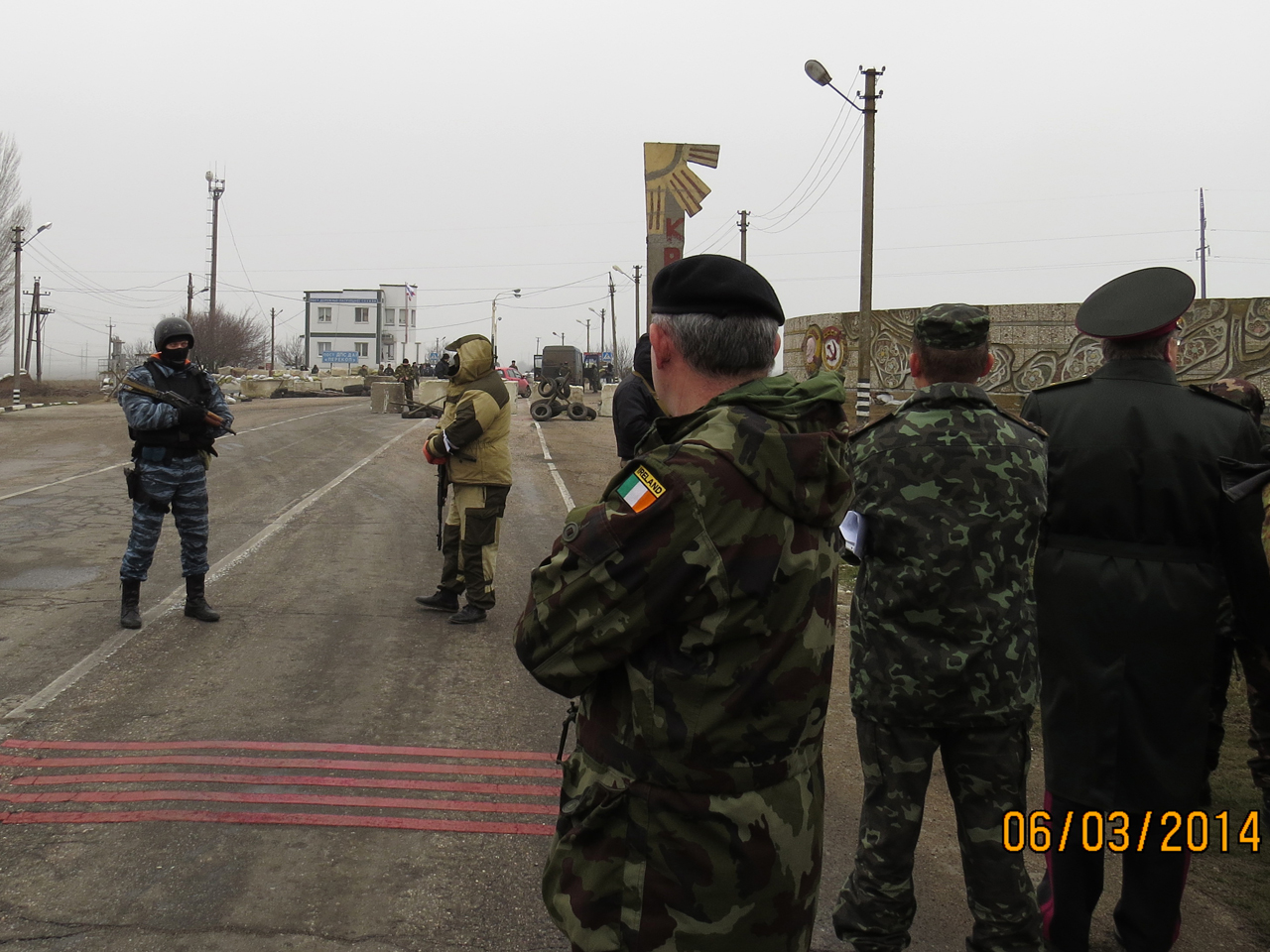 WARSAW -- A mission of observers from the Organisation for Security and Cooperation in Europe (OSCE) has been stopped from entering Ukraine's Crimean Peninsula by unidentified men in military fatigues, Poland's defense minister said.

"The mission has been detained, they cannot go further. They landed in Odessa and they were traveling by car from Odessa towards the Crimean Peninsula, but they were detained by unidentified men in fatigues," the defense minister, Tomasz Siemoniak, told reporters.

The OSCE military observer mission of 37 people from 18 countries, including the United States, was stopped at the Crimean border, organization spokesperson Tatyana Baeva said in Vienna. She said it wasn't clear who had stopped the mission, which had been formed at Ukraine's request to help monitor the tense situation in Crimea. CBS News correspondent Elizabeth Palmer said the mission was turned around at the same checkpoint heading into Crimea where she and her crew were stopped over the weekend by armed men, some of whom wore the distinctive blue camouflage uniforms of the Ukrainian Interior Ministry's "Berkut" force -- which was officially disbanded by the new government in Kiev after pro-Kremlin President Viktor Yanukovych fled.

The men at the checkpoint stole body armor from Palmer and her crew before allowing them to leave -- but not to enter Crimea.

The Berkut were widely believed to have been behind the deaths of scores of protesters in the uprising which led Yanukovych to flee Kiev and seek shelter in Russia.

The incident comes on a day when Crimea's regional parliament voted unanimously for the region to leave Ukraine and become a part of Russia. Local lawmakers announced that a referendum would be held on March 16, giving Crimean voters the choice of either becoming part of Russia, or seeing the peninsula remain a part of Ukraine, with some level of increased autonomy.

While Russia denies that its troops are deployed in Crimea beyond the confines of their bases, Ukraine's vast neighbor to the east has increased its usual troop presence in the region significantly during the past week.

As Palmer has reported, pro-Russian forces have either occupied or surrounded many Ukrainian military installations in the peninsula, sparking a tense but thus far peaceful standoff with their counterparts, many of whom have refused to abandon their posts.

Russian Foreign Minister Sergey Lavrov asserted Wednesday that "Russia could not order pro-Russian armed groups in Crimea to return to their bases because they are Ukrainian 'self-defense' forces which do not answer to Moscow," and that all members of Russia's Black Sea Fleet, which is based in Crimea, "are in their deployment sites."

The only qualification he made was that "additional vigilance measures were taken to safeguard the sites." That has left many in disbelief, as for days well-armed, well-organized units of men in matching unmarked military uniforms have patrolled the streets of many parts of Crimea and surrounded Ukraine's own military bases.

Palmer stood on the banks of a bay in Crimea Thursday morning, with the massive hull of a capsized ship protruding out of the water behind her. Ukrainian forces told her they suspected their Russian counterparts had sunk the vessel overnight to block access to the port.

Lavrov also said Wednesday that it was entirely up to the authorities in Ukraine and Crimea to grant permission for a foreign observer mission to work in the region. Western powers have suggested a possible diplomatic "off-ramp" to deescalate the crisis, of which international observers entering Crimea was thought to be a part.

U.S. Secretary of State John Kerry met Thursday for a second consecutive day with Lavrov, this time in Rome. The leaders met Wednesday, but Russia and Ukrainian officials did not hold direct talks, which the U.S. and it's allies had hoped for.