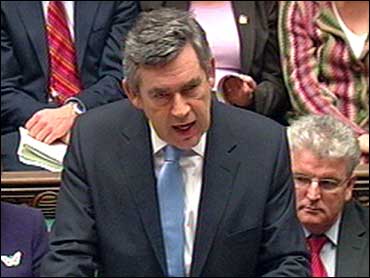 Prime Minister Gordon Brown said Monday that Britain will cut its troop levels in Iraq to 2,500 in early 2008, trimming the force by nearly half.

Brown told Parliament he planned "from next spring, to reduce force numbers in southern Iraq to a figure of 2,500." Decisions about further cuts will be made once that reduction is complete, he said.

The announcement comes just six days after Brown said 1,000 British service members would come home from Iraq by the end of 2007. He made the statement during a surprise trip to Iraq to meet senior military and civilian leaders from Iraq, the U.S. and Britain.

He told lawmakers Monday, "this is the long term strategy for overwatch," referring to his government's plan to end combat duty for U.K. service members in Iraq, instead having them in training roles working with Iraqi nationals.

``We plan to move to a second stage of overwatch, where the coalition would maintain a more limited re-intervention capacity and where the main focus will be on training and mentoring,'' Brown said.

Around 500 British logistics and support staff will be moved outside Iraq, but in the Middle East region, to support the remaining troops, Brown said. Officials said they are likely to be based in Kuwait.

Iraqi interpreters or civilian staff employed by British forces for more than 12 months will be given financial aid to resettle, leave the country or be cleared ``in agreed circumstances, for admission to the U.K.,'' Brown said.

Britain has about 5,500 soldiers based mainly at an air base on the fringes of the southern city of Basra, Iraq's second-largest city, 340 miles southeast of Baghdad.

They vacated their last remaining downtown base in Basra in September, accelerating calls from the British public to drawdown some forces.

Meanwhile, an official Iraqi investigation into a deadly shooting involving Blackwater USA security guards has raised the number of Iraqis killed to 17. It also found the gunfire was unwarranted and amounted to a deliberate crime. It recommends those involved face trial.

The Blackwater guards are accused of opening fire on Iraqi civilians in a main square in Baghdad last month. The guards have said they came under fire first.

The incident has outraged Iraqis.

Separately, a joint U.S.-Iraqi commission has met for the first time to review American security operations after the shooting.

The commission, chaired by Iraqi Defense Minister Abdul-Qader al-Obeidi and U.S. Embassy Deputy Chief of Mission, Patricia A. Butenis, expressed "mutual commitment of the Iraqi government and the U.S. government to work together to evaluate issues of safety and security related to personal security detail operations in Iraq," the brief embassy statement said.

The commission is expected to issue recommendations to both Baghdad and Washington on improving Iraqi and U.S. security procedures, with the "goal of ensuring that personal security detail operations do not endanger public safety" and prevent similar incidents in the future.

The North Carolina-based security company contends its employees came under fire first, but the Iraqi government and witnesses have disputed that.

The shootings, which are still under investigation, underscore the dilemma facing U.S. troops as former fighters join forces against extremists and Iraqis are increasingly forced to take up arms to protect themselves - how does one distinguish them from the enemy?

The U.S. military said the American troops shot the three civilians Thursday near a checkpoint manned by local members of a U.S.-allied group helping provide security in the village of Abu Lukah, near Musayyib, a Shiite-dominated town 40 miles south of Baghdad.

Maj. Gen. Rick Lynch, commander of the 3rd Infantry Division that controls territory south of the Iraqi capital, stressed the investigation was continuing but said initial results showed that U.S. troops fired on the checkpoint after spotting what appeared to be enemy forces planting roadside bombs.

"We are not looking to see who made a mistake but rather see what we can learn from that particular event," Lynch told The Associated Press Saturday during a whirlwind tour of patrol bases in the area.

Lynch said it's critical to "better coordinate between coalition forces, Iraqi security forces and concerned citizens," as he calls the vigilante-style groups that have sprouted across the country to fight extremists.

The comments reflect rising concerns about possible friendly fire killings that could threaten to undermine the U.S. strategy of seeking alliances with local Sunni and Shiite leaders against insurgent factions to fill the vacuum left by a national police force that has been plagued by allegations of corruption and infiltration by militants.

Incidents of shooting of civilians at checkpoints have drawn allegations by many, in Iraq and beyond, that U.S. troops and contractors are quick to fire and ask questions later.

After the Abu Lukah shooting, the so-called North of Hillah Awakening Council staged a three-day strike to register its anger over the loss of three of its members, but guards resumed their posts on Sunday.

"Such acts will create a gap between us and the Americans. We are trying to restore security in the area while the Americans are killing us," Nabil Saleh, 37, said as he stood with his AK-47 slung over his shoulder at his post in Abu Lukah.

Jabar Hamid, a 33-year-old Shiite from the village, said the U.S. military had paid $2,500 to each family of the three men killed.

"It is a tragedy and regrettable thing," he said.

In a bid to distinguish the recruits, the groups have been given vests with reflective stripes, similar to those worn by traffic police in many countries. Others wear brown T-shirts, with Iraqi hats similar to the national army's.

U.S. Capt. John Newman, 31, said the soldiers believe they can discern volunteers from the insurgents.

"We've given them their road guard vests," Newman said. "So, he'd better be wearing that vest if I see him carrying an AK-47."

Lynch stressed the Americans are not arming the groups because it's not necessary, the men already have weapons, primarily AK-47s that are legally permitted in Iraqi households.

"We are allowing the people of Iraq to secure their own areas and they are using their personal firearms to do that," he said.