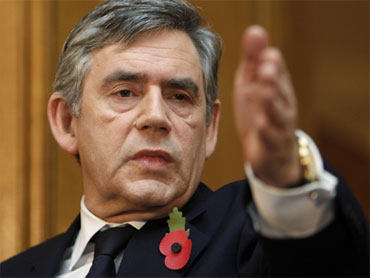 British Prime Minister Gordon Brown has personally apologized to the mother of a soldier slain in Afghanistan who was angered by what she said was the leader's botched letter of condolence, a tape released Tuesday showed.

But the mother, Jacqui Janes, accused the prime minister, in a phone call she recorded, of sending soldiers such as her son to Afghanistan without adequate resources.

Brown has been criticized for his messily handwritten note to Janes, whose 20-year-old son Jamie was killed last month by an explosion.

She said Brown misspelled both her name and her son's in his letter, and accused the prime minister of a lack of respect.

Offended, she called a newspaper, which claimed there were 25 spelling mistakes in the prime minister's hard-to-read note; the newspaper published it, calling it "shameful," reports CBS News correspondent Richard Roth.

"I know every injury my child sustained that day," she told Brown. "I know that my son could have survived, but my son bled to death.

"How would you like it if one of your children, God forbid, went to a war ... and because of a lack, lack of helicopters, lack of equipment, your child bled to death?" she asked.

A recording of the 13-minute conversation was posted Tuesday by The Sun tabloid newspaper on its Web site.

Brown, whose sight is impaired, told a news conference Tuesday that he had apologized for his sometimes illegible handwriting, and said he sympathized with parents who have lost children in Afghanistan.

"I'm a parent who understands the feelings when something goes terribly, terribly wrong, and I understand also how long it takes for people to handle and deal with the grief we have all experienced," Brown said.

Brown's daughter, Jennifer, died in 2002 less than two weeks after her birth. His son Fraser, born in 2006, has been diagnosed with cystic fibrosis. Brown and his wife, Sarah, have one other son, John.

The prime minister appeared to win public support for making the apology, and for choosing to write letters of condolence by hand to families of soldiers who die in action. Gill Grigg, of the War Widows' Association, said it was "a wonderful gesture" by Brown.