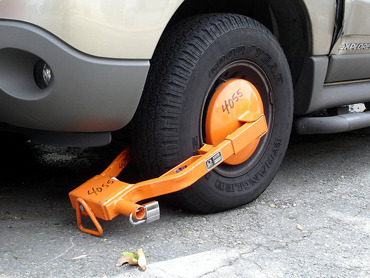 Haroon Zafaryab returned last Wednesday from Ramadan prayers to find his car clamped and a ticket for Â£365, the equivalent of $569, on the windshield.

So he sat himself inside for 30 hours to prevent it from being towed away, the BBC reported.

As he was planted inside the vehicle, police clamped all four wheels and stuck about 40 more tickets onto the windshield, amounting to Â£3,565 ($5,567) in fines.

Zafaryab, 27, from Kingsbury, Britain, owns a nursery and works in a medical supplies company. He was at a mosque for prayers in the town of Wembley when the incident occurred.

"They tried charging me Â£365 for the initial clamp. I questioned why and they said because I've been here more than two hours and in my heart of hearts I knew it was wrong," he told the BBC.

British ministers announced plans Tuesday to ban clamping - which is known as booting in the U.S. - on all private land in England and Wales.

British Home Office minister Lynne Featherstone said the move would be introduced in November, and could come into effect early next year.

Zafaryab said even called lawyers, who said the police were just trying to scare him. They advised him to stick it out.

"People were bringing us food because I had to break my fast at sunset, and before sunrise I had to eat again. So the community and the Wembley mosque committee were bringing me food, milk with rose syrup and dates, and my wife brought some food from home."

Not one, but two tow trucks turned up for an around-the-clock watch on Zafaryab.

Finally, after 30 hours, Zafaryab's car was finally released after he paid a Â£100 ($156) fine for parking on private land without a permit.

He plans to challenge the fine in court.