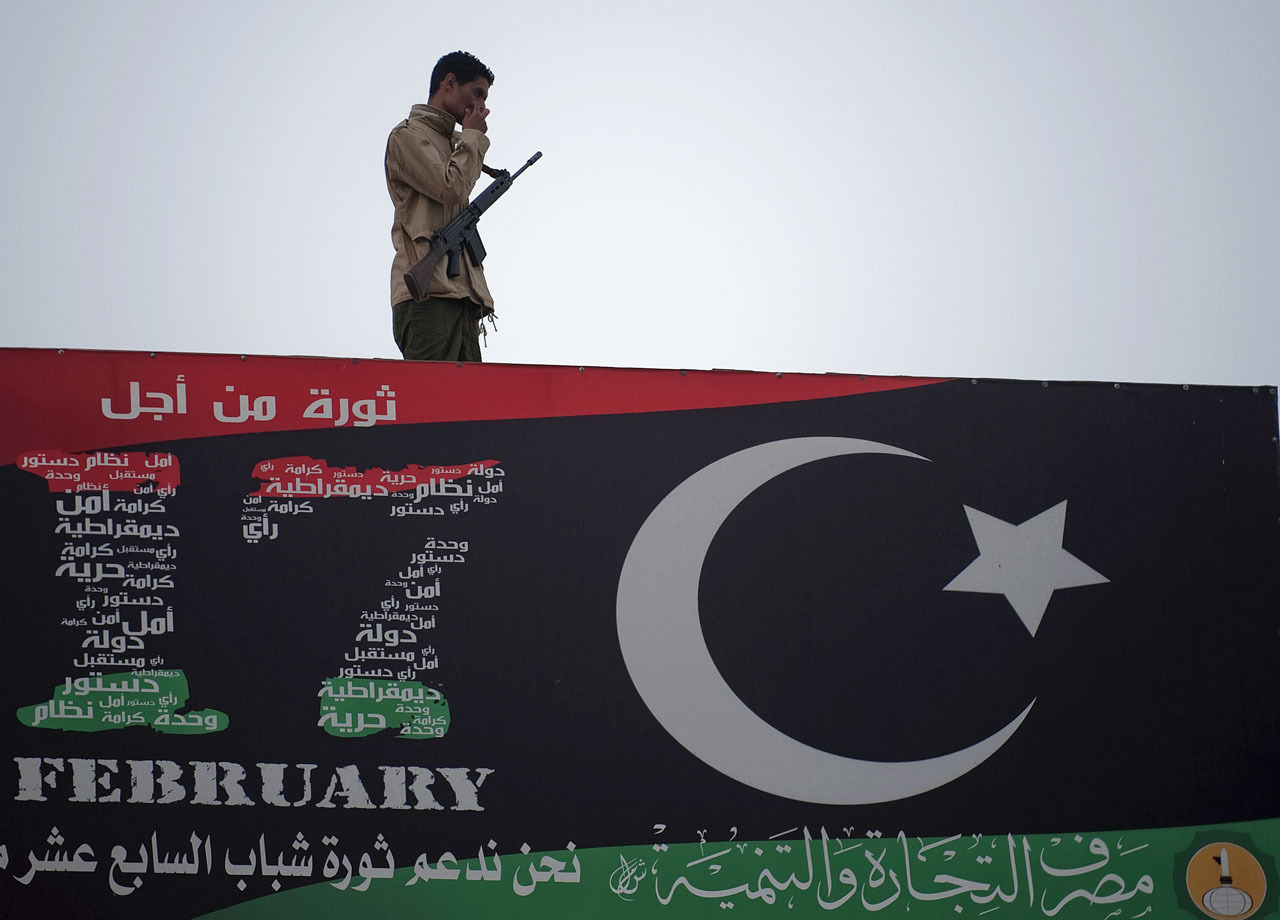 The action was a significant step-up in NATO's operations and a major boost to Libyan rebels on the ground, just a day after rebel fighters forced government troops from three western towns and broke the siege of a fourth in yet another erosion of Qaddafi's power since the eruption in mid-February of the uprising to end his 42-year rule.

The Apaches hit two targets near the coastal city of Brega, according to a statement from the Ministry of Defense in London. It said they took off from HMS Ocean, stationed off the Libyan coast and returned safely after completing their mission in the early morning hours.

British Maj. Gen. Nick Pope said the Apaches targeted a radar installation and a military checkpoint. "Hellfire missiles and 30mm cannon were used to destroy the targets," he said.

Brega is of strategic importance to Libya's oil industry and lies on the coastal road along the Mediterranean that leads to the capital, Tripoli. In the early days of the uprising against Qaddafi, it went back and forth between rebel and loyalist hands, but later the frontline settled to the east of the city, leaving Brega under control of Qaddafi's forces.

Waddan lies southwest of Brega, about 140 miles from the coastline.

The French helicopters took off from the helicopter transport ship Tonnerre in the Mediterranean, said Col. Thierry Burkhard. He said they struck 15 military vehicles and 5 military command buildings, without identifying the sites or their location.

Burkhard said the French helicopters came under light-arms fire but were not hit or damaged. The operation was aimed at putting "additional pressure on the Qaddafi forces who continue to threaten the civilian population," he said.

But the helicopters are a game-changer, giving the alliance a key advantage in close-up combat, flying at much lower altitudes.

British Defense Secretary Liam Fox said Saturday that the "use of the attack helicopters is a logical extension" in NATO's campaign and indicated more would be used in the future.

"This gives us a chance to target new targets in a way we weren't able to do," Fox said from Singapore, where he was attending an Asian security conference. "What it does show is our willing to use the range of assets we have to keep the pressure up. We will continue with the methods we have to degrade his (Qaddafi's) command and control, to degrade his supplies."

The helicopter strikes came after Libyan rebels on Friday won control of four towns in the western Nafusa mountain range, where government forces have besieged and randomly shelled rebel-held areas for months.

After weeks of siege, the rebels managed to force government troops out of Yifran and also took neighboring Galaa, said Col. Jumaa Ibrahim of the region's rebel military council. The rebels also pushed government fighters from Shakshuk and Qasr al-Haj, near a key road that runs along the mountain range's northern edge. The latter holds an important power station for local towns.

Ibrahim said rebel forces took the towns on Thursday then moved north to clash with Qaddafi forces in the village of Bir Ayyad on Friday. There were no reports of casualties.

The small rebel force in the western mountains is unlikely to threaten Qaddafi's hold on Tripoli, 45 miles northwest, but the victories could bring relief to local residents by opening up roads between their communities. The western mountain population is tiny compared to the large rebel-held territories in east Libya.

The conflict in Libya is nearly four months along, but the situation on the ground appears mostly stalemated. NATO airstrikes have kept the outgunned rebels from being overrun, but the rebels have been unable to mount an effective offensive against Qaddafi's better-equipped armed forces.

Qaddafi's regime has been slowly crumbling from within. A significant number of army officers and several Cabinet ministers have defected, and most have expressed support for the opposition, but Qaddafi's hold on power shows little sign of loosening.

Qaddafi has been seen in public rarely and heard even less frequently since a NATO airstrike on his compound killed one of his sons on April 30. Questions are arising about the physical and mental state of the 69-year-old dictator, who has ruled Libya since 1969.

Rebels have turned down initiatives calling for cease-fires, insisting that Qaddafi and his sons must relinquish power and leave the country.