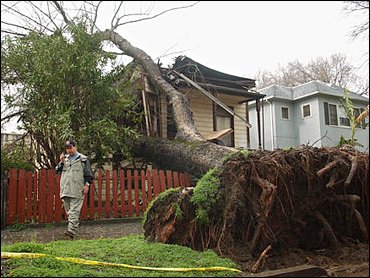 A strong Pacific storm soaked Southern California with up to three inches of rain and snow by late Wednesday as residents and emergency crews remained on alert for flash floods and mudslides in areas left bare by fall wildfires.

"We're going to see at least two-to-three inches of rain in downtown Los Angeles, but much more up across the hills and in through the San Bernardino area, probably anywhere between four and six inches of rain," warned CBS News Meteorologist George Cullen.

A powerful winter storm swept through Northern California on Wednesday, flooding streets, clogging traffic and leaving tens of thousands of people without power.

"It's one of the strongest storms of this winter season," said Warren Brier, a meteorologist at the National Weather Service, noting the intensity of its rain, winds and waves.

Inland areas of Northern California were bracing for snow.

"They're going to be measuring this snow in feet — probably a foot of snow today across the Sierra and up through the Cascades, and there's going to be a lot of places up in the mountains that receive anywhere between two and three feet of snow from this storm alone," said Cullen.

The Southeast was also being hit by a winter storm Thursday morning.

"This presents a real problem for drivers down here, since we're not used to this kind of snowfall," said Marc Mullins of CBS affiliate WGCL-TV in Atlanta. "The winter storm warning [is] expected to last through the evening. ... We're expecting about four to six inches of snow here."

Cullen called it the South's version of a "Nor'easter."

"The coastline is seeing gale-force winds and heavy rain, while interior sections of the Carolinas and even northern Georgia will be seeing a mixture of sleet, rain and snow, probably changing to all snow," he said.

Residents of high-risk communities east of Los Angeles in San Bernardino County were urged to leave as authorities opened a center for those who voluntarily evacuate their homes.

"We're going to see some mudslides, I'm afraid, and flash flooding, and there are flash flood warnings and watches for the entire region, as the powerful storm comes in from the Pacific," said Cullen.

The storm, which pounded the northern half of California earlier in the day, began dropping rain in metropolitan Los Angeles by mid-afternoon. Several inches of snow had fallen in the region's mountain areas by late evening. It was the latest system in an extended period of wet weather across Southern California skies in recent days.

"Mudslides could become a major problem with this storm," the NWS said. "Persons living in or adjacent to steep terrain should stay alert for any land movement."

The fall wildfires left vast areas denuded at points in an arc extending from northwest of Los Angeles, east through San Bernardino County and south into San Diego County.

In preparation for the storm, sand bags and concrete barriers were positioned, channel walls were reinforced and debris flows were cleared.

Bob Page, a spokesman for the San Bernardino County Public Works division, said preparation for the storm had been under way for months in the mountain communities and surrounding areas affected by the wildfires.

"The county Public Works Department started work immediately because we knew of the risk from flash floods, mud flows and debris flows," he said. "We began months ago clearing out the debris basins and channels to make sure they had 100 percent capacity to handle whatever might come down the mountains."