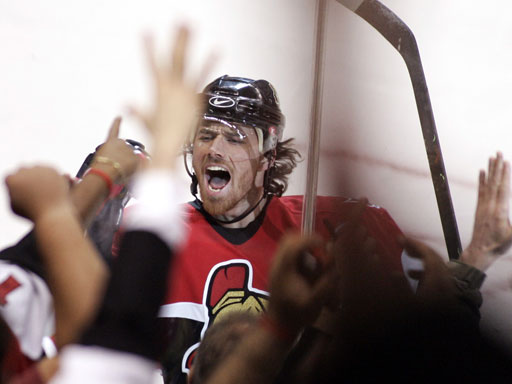 The Tennessee Lady Vols were six points down and one step ahead of their coach.

Pat Summitt's team was trailing 34-28 at halftime Wednesday night against top-ranked Connecticut when she saw that someone had already written the phrase "box out" on the locker room board. Junior Kyra Elzy fessed up. She and her Tennessee teammates knew that rebounding would get them back in the game.

The Lady Vols (17-3) rallied with a dozen points off second chances in the final period and got a game-winning jumper from Semeka Randall with 4 seconds left to beat UConn 72-71. It was the Huskies' first loss.

"The thing you don't want to do is fall apart," Summitt said. "We came together."

The Huskies held Randall to four points in the first half. Randall, the emotional leader of the team, didn't get her first field goal until 13 minutes into the game.

In the second half, the Lady Vols needed rebounds and they needed Randall.

She finished with 17 points and got six points in the final two minutes in the second meeting of the women's basketball powerhouses this year. The Lady Vols reversed a 74-67 loss to Connecticut (19-1) in Knoxville on Jan. 8.

Tamika Catchings led all players with 13 rebounds for Tennessee.

Double-teamed down the stretch, Randall split two defenders and made the game-winner.

"I got a good look. I took the shot, I didn't think twice, I just went with my instinct," Randall said.

"I saw the look in her eyes," Catchings said. "Whenever she gets a look like that, I know it's going to go in."

The Huskies had one more chance. Svetlana Abrosimova took the inbounds pass and got the ball to Tamika Williams. Guarded by Michelle Snow, Williams' shot bounced off the bottom of the rim.

Williams said the ply was designed for Abrosimova to drive to the basket, but she drew two defenders as she neared the lane and passed to Williams.

"It just happened to come to me," Williams said. "I just have to take it up stronger."

There always has been little room for error in the rivalry, which took root in 1995 when the Huskies beat the Lady Vols in the regular season to gain the No. 1 ranking. They met again in the national championship game, and UConn came away with its only national title and a 35-0 season. The Lady Vols have won six national titles.

"Every time we made a mistake, they made us pay for it. We reacted like a young team. We let them keep going on their roll," Connecticut coach Geno Auriemma said. "It was fitting it came down to the last shot."

The Lady Vols trailed by as many as 13 in the first half. Catchings scored five points, starting a 15-0 run that extended into the first two minutes of the second half and gave Tennessee its first lead at 36-34.

"The hope was in the end we could just hang on and make plays," Summitt said.

Catchings had 11 of her 19 points in the second half, including two free throws midway through the half that gave the Lady Vols their largest lead at 63-54.

Williams then scored nine of the Huskies' next 12 points as Connecticut took a 66-65 lead with 3:46 remaining.

Williams led the Huskies with 19 points, and Sue Bird had 15 points and eight assists.