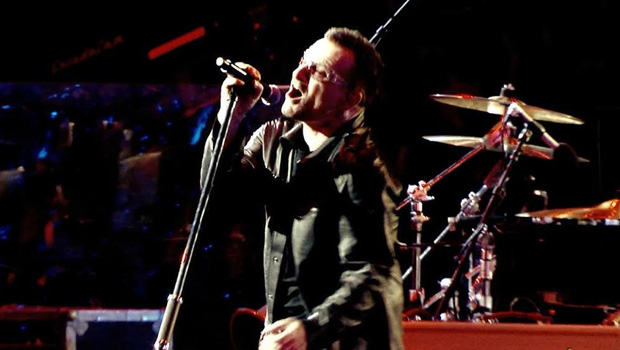 The rock band U2 is at the top of its game, and back on tour. Anthony Mason will look behind-the-scenes:

It's been four years since U2 last toured together. Four years since Bono, The Edge, Adam Clayton and Larry Mullen Jr., conquered the world, selling more than seven million tickets and earning more than $700 million -- leading Rolling Stone magazine to label them "the biggest band on Earth."

"Your last tour was your most successful tour in history," said Mason.

"Right, thank God!" laughed Bono. "That was great. Loved hearing you say that, Anthony! We're going to get on just great!"


"That does mean something to you, though?"

"Are you competitive about that sort of thing? I mean, did you feel yourself competing against the Stones while you were touring?"

"I remember Mick Jagger came to see us at Pop Mart," Bono said, referring to U2's 1997 tour. "And we'd really gone to some lengths in Pop Mart, and he said, 'Oh, this is getting like "Star Wars."'"

But they're still travelling with 24 semi trucks full of gear. "The lion tamers are over there," Bono said, showing Mason around the floor of the Rogers Arena in Vancouver. "Bring out the camels! It's the circus come to town."

Mason caught up with the band on the road, first in Vancouver, where U2 spent a month rehearsing.


"This is the behind-the-scenes stuff that no one gets to see," said The Edge, who took Mason through the band's subterranean set up, under the stage, including "Guitar World" -- a collection of instruments, from a new Fender to a Chet Atkins Country Gentleman from the mid-'60s. "Every guitar in the show has to have a spare," he said.

A U2 tour is a blend of both high and low tech. The Edge uses antique amps: "It's still valve technology. It's exactly the same as it was in the '50s. And that is, for whatever reason when you plug in an electric guitar to one of these, it's just the way it should sound."

But then there's the mammoth LED screen suspended above the arena floor: "We basically have this double-sided screen," The Edge said. "But we can also climb into the image."

During their concerts the band will climb into what feels like a giant cage: "This'll be our home for the next year or so!" The Edge said.

It's different, he admitted, but it's transforming the concert experience.

But on opening night in Vancouver the tour almost ended, when The Edge went over the edge, falling off the stage.

"It was a moment of reverie where I just completely lost track of where I was on the stage," he told Mason.

Luckily, he was unhurt. Were his band mates nervous when he went over the side?

"Sick in the pit of my stomach," said Adam Clayton. "It was a weird moment, 'cause I knew what was down there."

"Start and end all in the same evening," said Larry Mullen.

The tour had already been postponed once, after Bono crashed a bicycle in New York's Central Park in November, fracturing his cheek, shoulder and hand. He still can't play guitar: "I can't close these fingers," he said.

"Do you think you'll ever be able to?" Mason asked.

He said he doesn't remember the accident. "When you figured out what had happened, what were you thinking?"

"Edge says that I look at my body like it's an inconvenience, and that I need to be more mindful," Bono said. "And you know, I've been disagreeing with Edge all my life on musical matters, but I'm starting to pay much more attention to him on philosophical ones!"

Next year will mark 40 years since the four band members first came together. It didn't look promising at first: A rejection letter from RSO Records in 1979 read, "Your tape is not suitable for us at present. We wish you luck with your future career."

"I mean, we got rejected by pretty much every record label in the U.K.; it wasn't just that letter," The Edge said. "We had probably six or seven similar letters."

With their new album and tour, U2 has returned to their early days in Dublin. Bono's song, "Iris," is about his mother, who died when he was 14:

"It's not a very punk rock thing to do, is it? Writin' a song about your mother?" he said. "I mean, I was really, really embarrassed, and woke up a few days before the Apple release and tried to stop it from being on the album. I just thought, 'I can't do this. I can't do this to myself. I'm a macho Irish singer, blah, blah, blah.'"

But while texting his brother that day, he realized it was an important anniversary: "She, Iris, collapsed at the gravesite of her father as he was being put into the ground. And I never saw her again."

They're all in their 50s now, so why do they keep coming back for this? "I think there's something in the jeopardy," said Clayton.

They've sold 170 million records, but there's still a driving insecurity behind this band -- a desire to remain relevant.

"If you let go of that aspect of the culture of popular music and you choose to be less popular, you're sort of in a different game," said Clayton.

Mason asked The Edge, "So many bands don't make it. Why are you still here?"


"We love it," he replied. "We just love that moment where a song comes together and it really, we think it's connecting. I guess we just love what we do."

So U2 is back on the road, trying to push the envelope again.

Mason asked, "You have to find a reason to want to do back, yes?"

"The songs want us to do that," replied Bono. "You know, people say, 'Your songs are like your children,' and they're not. No, they're like your parents! They tell you how to dress, what to look like, and they don't like being ignored, they really don't!"