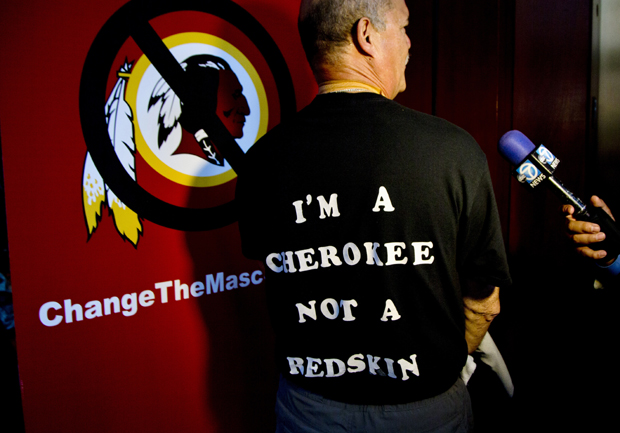 The U.S. Patent and Trademark Office canceled six federal trademark registrations for the Washington Redskins, ruling that the football team's name is "disparaging to Native Americans."

The Washington Post reports that the case was filed on behalf of five Native Americans.

"We decide, based on the evidence properly before us, that these registrations must be cancelled because they were disparaging to Native Americans at the respective times they were registered," the Trademark Trial and Appeal Board wrote in its opinion.

In its ruling, the board cites federal trademark law that "prohibits registration of marks that may disparage persons or bring them into contempt or disrepute."

However, the board noted that the "registrations will not appear in the USPTO's records as cancelled until after any judicial review is completed."

Suzan Shown Harjo, one of the plaintiffs who testified at last year's hearing, said she was "thrilled and delighted" with the decision. The Redskins did not immediately comment.

The board's ruling is similar to one it issued in 1999. That ruling was overturned in 2003 in large part on a technicality because the courts decided that the plaintiffs were too old.

The new case was launched in 2006 by a younger group of Native Americans. A hearing was held in March 2013.

Just like last time, the Redskins can retain their trademark protection during an appeal.

In a statement, the U.S. Patent and Trademark Office said that if the decision is not appealed or if it is affirmed by a federal court, the trademark owner "will lose the legal benefits conferred by federal registration."

The ruling announced Wednesday comes after a campaign to change the name has gained momentum over the past year.

Senator Maria Cantwell, D-Wash., who is among the lawmakers who has urged the NFL for a change in the team name, said Wednesday that she was "excited" by the board's ruling.

"Finally people are recognizing that this issue can no longer be a business case for the NFL to use this patent," Cantwell said. "This is not the end of this case, but this is a landmark decision by the patent office."

In a letter to the team's president, Reid called the Redskins name a racial slur that disparages the American people. The Nevada Democrat, who said he represents 27 tribes in his state, rejected Bruce Allen's invitation to a Redskins home game until the team does the right thing and changes its name.

In May, half of the Senate wrote letters to the NFL urging a change in the team's name. Redskins owner Daniel Snyder has vowed never to change the name.

Allen had written to Reid saying the football team's nickname is "respectful" toward Native Americans.

"Daniel Snyder may be the last person in the world to realize this, but it's just a matter of time until he is forced to do the right thing and change the name," Reid said Wednesday after the ruling.

Earlier this year, the U.S. Patent and Trademark Office rejected a request from a company to sell pork rinds using the word "Redskins" because it deemed the term to be "derogatory slang."