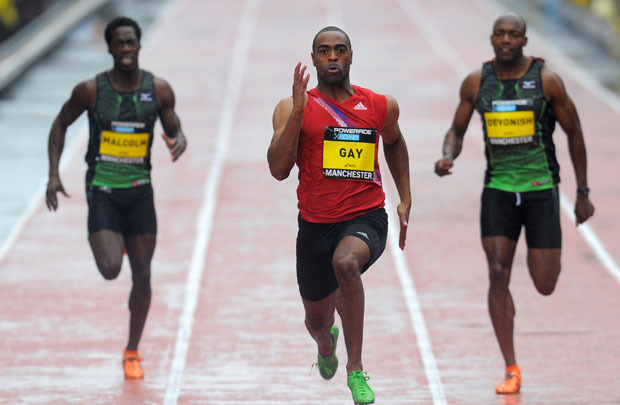 American champion Tyson Gay, who went out of his way to promote himself as an anti-drug athlete.

Jamaican Sherone Simpson, who has a gold and two silver Olympic medals to her credit.

Word came Sunday that all three had failed drug tests. "A sad day," one former track official called it — and certainly a day that punctured the myth that the oft-troubled sport has cleaned up its act.

"I am not now — nor have I ever been — a cheat," Powell said in a message released through his Twitter account.

The 30-year-old Powell, whose 100-meter record of 9.74 stood until Usain Bolt beat it in 2008, was calling for an investigation as to how a stimulant called oxilofrine entered his system and caused a positive test at Jamaica's national championships in June.

Simpson, who tested positive for the same stimulant, said she "would not intentionally take an illegal substance of any form into my system."

Gay, the American-record holder in the 100, was more contrite, though he wasn't taking full responsibility.

Gay, who won the 100 and 200 meters at U.S. nationals last month, said he would pull out of the world championships.

The 30-year-old, who won the world championship in the 100, 200 and 4x100 relay in 2007, took part in the U.S. Anti-Doping Agency's "My Victory" program — in which athletes volunteer for enhanced testing to prove they're clean — and his results never raised red flags. Until, that is, an out-of-competition test May 16, where results came back positive for a banned substance, the identity of which neither he nor USADA CEO Travis Tygart would reveal.

Gay said his "B" sample will be tested soon, possibly as early as this week.

Generally, first-time offenders are hit with two-year bans, though reduced penalties are sometimes given if there are extenuating circumstances, which both Gay and his coach, Lance Brauman, said there were.

"He mentioned that he (trusted) someone and that person was untrustworthy at the end the day," Brauman told The Associated Press in a phone interview. "Maybe I'm naive, but I believe him."

Max Siegel, the CEO of USA Track and Field, said in a statement: "It is not the news anyone wanted to hear, at any time, about any athlete." He said he looked to USADA to handle the case "appropriately."

"But I don't see anything on the horizon that says this will be abated in any way," Logan told AP.

The former CEO recently wrote a column arguing the fight against performance-enhancing drugs in sports should be ceded because, in his view, anti-doping rules make very little headway against a problem that never seems to disappear. He said he wasn't surprised when he heard about Sunday's onslaught of failed tests and didn't put much credence into the excuses and apologies from those who came up positive.

"Over the course of time, culture has bred certain defenses," Logan said. "The reality is, people are using substances to reengineer their bodies or heal better. That's reality."

Four-time Olympic medalist and sprint analyst Ato Boldon also called it a "difficult day because track and field fans are left not knowing what to believe."

"Everyone has that favorite, that one guy, `Hey, this is the guy I've always been a supporter of his,"' Boldon said. "Asafa and Tyson are certainly two people who a lot of track fans have loved and admired for a long time. Unfortunately, they failed drug tests."

While Gay's case gets sorted out on U.S. turf, the positives recorded by Powell and Simpson are part of a bigger doping crisis hitting Jamaica, the home of Bolt and the country that has won 28 medals over the last three Olympics.

In Sunday's editions, The Gleaner newspaper of Jamaica reported that five athletes had tested positive. Paul Doyle, the agent who represents Powell and Simpson, confirmed to the AP that his sprinters were among them. Shortly after Doyle's confirmation, Powell and Simpson each released statements acknowledging the positive tests.

The news stirred up angst on the island, where success on the track is a point of pride but the rigor of the country's anti-doping program is under constant scrutiny.

"This does not auger well for track and field globally," said Rashalee Mitchell, a 29-year-old assistant social sciences lecturer at Jamaica's campus of the University of the West Indies. "It is fast serving to taint ... our proud and long-standing reputation of producing strong, excellent, raw, homegrown talent that has excelled on the world stage without any drug-related enhancement."

The news came a month after another Jamaican Olympic gold medalist, Veronica Campbell-Brown, tested positive for a banned diuretic.

Campbell-Brown is being suspended while a disciplinary panel reviews her case. Track's governing body said the case appeared to involve a "lesser" offense, which could mean a reduced sentence for the 200-meter champion at the 2004 and 2008 Olympics.

Shortly after news of Campbell-Brown's positives, her agent, Claude Bryan, said his client is not a cheat and she does not accept "guilt of willfully taking a banned substance."

The known banned substances in these cases, a diuretic and a stimulant, don't resemble the steroids and designer drugs that took down some of the world's top athletes — Marion Jones, Tim Montgomery, Ben Johnson, to name a few — over the past years and decades. But many of the denials and claims of extenuating circumstances in the current cases carry a whiff of familiarity.

And once again, track is in the news for the wrong reasons, falling short of promises the sport's leaders make about cleaning things up every time the next cycle of doping stories hit.

"This result has left me completely devastated in many respects," said Powell, who didn't qualify for individual spots at worlds but could still make Jamaica's relay team if his positive test doesn't net a suspension. "I am reeling from this genuinely surprising result. I am confident, however, that I will come out stronger and wiser and better prepared to deal with the many twists and turns of being a professional athlete."