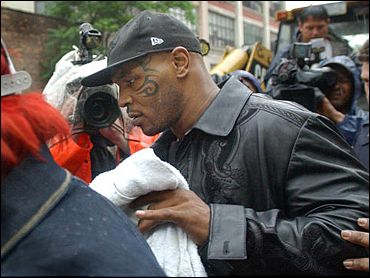 Now, boxer Mike Tyson has been KO'ed by money trouble.

He filed for Chapter 11 bankruptcy protection on Friday in New York. Tyson's lawyer puts some of the blame on the former champ---but says others also wasted his money.

The action shows Tyson has taken control of himself and wants to resolve his money problems, said Debra Grassgreen, his attorney.

"As a professional fighter, who relied on others to manage his affairs, he discovered that his debts far exceeded his assets," Grassgreen said in a news release. "Now, he has taken the lead in bringing order to his financial affairs."

The 37-year-old Tyson, who became the youngest heavyweight champ at age 20, spent much of his $300 million in ring earnings on mansions, automobiles, jewelry and extravagant gifts for his entourage.

A good portion of Tyson's take also went to promoter Don King. Tyson is now suing King for $100 million. The lawsuit, set to go to trial in September, claims King cheated Tyson out of the money after he was released from prison in 1995 after serving three years on a rape conviction and then went back to boxing for the promoter.

Earlier this year, as part of a divorce settlement, Tyson agreed to pay his ex-wife, Monica, $6.5 million from future earnings.

Tyson pleaded not guilty last month to misdemeanor assault, harassment and disorderly conduct charges for a June 21 incident outside a Brooklyn hotel. Tyson's lawyers claimed his actions were justified because the two men allegedly menaced the boxer first by telling him they were armed. Prosecutors say the assault went too far.

Tyson faces up to a year if convicted of the latest charges.