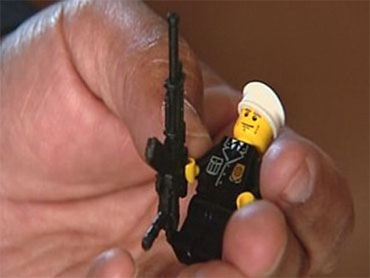 (WCBS)
STATEN ISLAND, NY (CBS) Patrick Timoney brought a gun to school Tuesday and nearly got suspended for it. Sounds reasonable until you see the gun – a two-inch LEGO toy gun.

9-year-old Patrick, a fourth grader at PS 52 in Staten Island, N.Y., says he brought some of his LEGOs to school to show his friends during lunch but when the principal saw that one of those toys was a gun she pulled him out of class and called his parents.

A spokesman for the city's Department of Education says that the principal, Evelyn Matroianni, was just following the "no tolerance" policy of not allowing any weapons on campus.

"This isn't a safety issue," she said. "This is a judgment issue. I mean, what's the worst that could happen? It could poke you in the eye?"

Laura Timoney said Patrick was in tears when she got to the school and even asked to stay home from school Wednesday because he was afraid the principal was mad at him.

The toy gun goes with a policeman figure and is his favorite because his father, Pat Timoney, is a retired police officer.