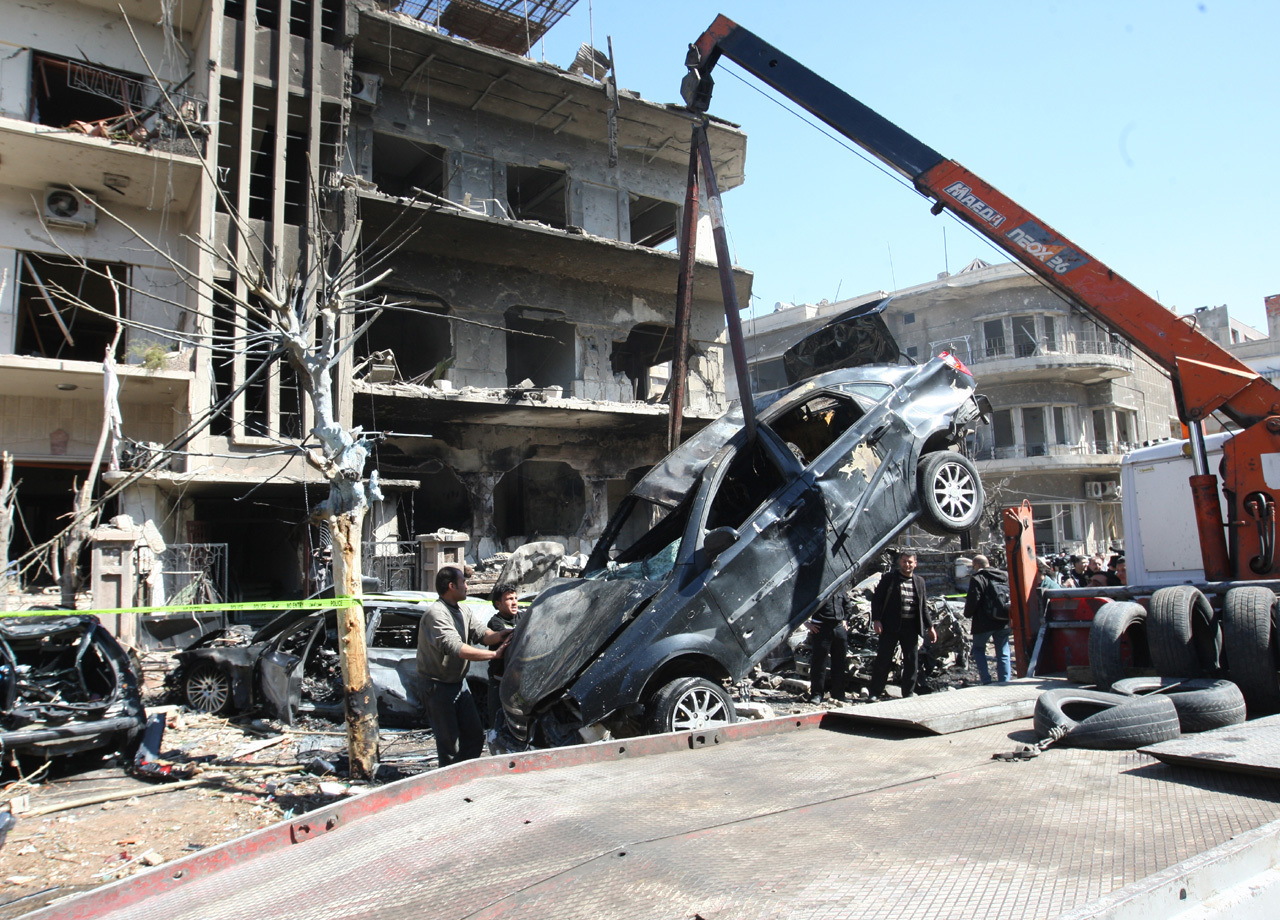 The state news agency says a third explosion was reported at a refugee camp housing thousands of Palestinians, but the two bombers were the only casualties.

There have been a string of large-scale bombings against the regime in its stronghold of Damascus that suggest a dangerous, wild-card element in the year-old anti-government revolt. The regime blamed the opposition, which denied having a role or the capabilities to carry out such a sophisticated attack. And after other similar attacks, U.S. officials suggested al Qaeda militants may be joining the fray.

"All our windows and doors are blown out," said Majed Seibiyah, 29, who lives in the area of one of the blasts. "I was sleeping when I heard a sound like an earthquake. I didn't grasp what was happening until I heard screaming in the street."

The first explosion around 7 a.m. targeted the air force intelligence building in the residential district of al-Qassaa, a predominantly Christian area. It caused destruction in a 100-meter (yard) radius, shattering windows, blowing doors off their hinges and throwing chairs and other furniture off balconies.

It carried interviews with the wounded in hospital.

"Is this the assistance promised by Qatar and Saudi Arabia?" asked one of the injured.

The two Gulf powerhouses have been fiercely critical of the Syrian government's crackdown on dissent and have been discussing military aid to the rebels. The U.N. says well over 8,000 have died since the uprising began a year ago, inspired by Arab Spring revolts across the Middle East and North Africa.

A string of previous blasts that struck the capital, also suicide bombings, have killed dozens of people since December.

But top U.S. intelligence officials also have pointed to al Qaeda in Iraq as the likely culprit behind the previous bombings, raising the possibility its fighters are infiltrating across the border to take advantage of the turmoil.

A previously unknown Islamist group calling itself Al-Nusra Front to Protect the Levant claimed responsibility for the previous attacks in a video posted online, saying it carried them out "to avenge the people of Homs." Homs is an opposition stronghold in central Syria that has been hard-hit in the government crackdown.

Syria's military and political leadership is stacked heavily with members of the minority Alawite sect, an offshoot of Shiite Islam to which Assad and the ruling elite belong. The Alawite leaders of Syria are closely allied with Shiite Iran.

Sunnis are the majority in the country of 22 million and make up the backbone of the opposition.

A suspected al Qaeda presence creates new obstacles for the U.S., its Western allies and Arab states trying to figure out a way to help push Assad from power. If al Qaeda does interfere, it may also rally Syrian religious minorities, fearful of Sunni radicalism, to get behind the regime.

The blasts also raised questions about how suicide car bombers were able to penetrate high-security areas in Damascus. Since the first suicide bombings struck the capital in December, the government has taken exceptional measures around state security and other government institutions and ministries, putting up thick concrete blast walls and checkpoints and guards checking drivers' IDs.

Bassma Kodmani, a Paris-based member of the opposition Syrian National Council, said she doubted the armed groups trying to bring Assad down by force, such as the rebel Free Syrian Army, have the capacity to carry out such attacks on security institutions in the capital.

"I don't think any of the opposition forces or the Free Syrian Army has the capacity to do such an operation to target these buildings because they are fortresses," she said by telephone. "They are very well guarded. There is no way anyone can penetrate them without having strong support and complicity from inside the security apparatus."

The rebel Free Syrian Army, the most powerful armed opposition force, has appealed for the international community to send weapons to help it fight the regime, but so far, no countries are heeding the call. The U.S. and others have not advocated arming the rebels, in part out of fear it would create an even more bloody and prolonged battle.

Though the Syrian uprising began as mostly peaceful protests, it has becoming increasingly militarized, pushing the country to the brink of civil war.

An Interior Ministry statement tied the latest explosions to "the recent escalation by regional and international parties, and their open calls for sending weapons to Syria."

The morning attacks caused panic on the streets. Shooting broke out soon after the blasts and sent residents and others who had gathered in the area fleeing, an Associated Press reporter at the scene said.

The government uses the attack to reinforce its claim that this is not a popular uprising, blaming foreign extremists and gangs trying to destroy the country.

In recent weeks, Syrian forces have waged a series of heavy offensives against the main strongholds of the opposition — Homs in the center, Idlib in the north and Daraa in the south.

The Local Coordination Committees, a key activist group, said 22 people were killed across the country Saturday, including eight in the northwestern city of Raqqa where clashes were reported between the military and army defectors, and five in Idlib.

Diplomatic efforts to solve the crisis have so far brought no result. But U.N. envoy Kofi Annan told the Security Council in a briefing Friday that he would return to Damascus even though his recent visit and talks with Assad saw no progress in attempts to cobble together negotiations.

Both Assad and much of the opposition spurned Annan's appeal for talks.

Syria told Annan in a letter obtained by the AP Saturday that it is "keen to end violence" but insists that armed opposition groups must give up their weapons first.

The Syrian response falls far short of U.S. and European demands that regime forces stop fighting first — and even Russia's insistence that both sides stop fighting simultaneously. But it does leave open the door for talks, and Annan is sending a team to Damascus on Sunday to continue efforts on implementing his proposal.