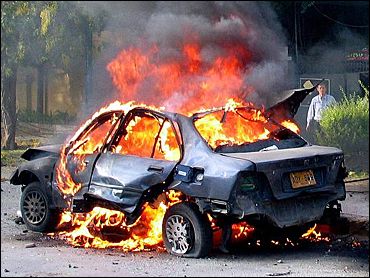 Ghulam Mohammed Dogar, senior superintendent of city police, said a bomb planted inside the first car detonated outside the gate of the school, called the Pakistan-American Cultural Center. Twenty-five minutes later, a larger blast ripped through a second car parked nearby.

Wreckage from the car flew in the air and hit bystanders. Some stumbled from the scene with minor wounds. At least one other was carried away on a stretcher, bleeding heavily.

The car billowed fire and smoke and firefighters tried to extinguish it.

An Associated Press reporter at the scene saw three photographers and three policemen being taken to the hospital in an ambulance.

Dr. Shakoor Bhatti said 17 wounded were being treated at the city's government-run Jinnah Hospital, and one person, a policeman, was in critical condition. Television footage showed some of the wounded being treated on the floor of the hospital.

After the first explosion, police sealed off the area as bomb disposal experts arrived to examine the wreckage. The second blast damaged the outer wall of the school, but the building itself was undamaged.

The bomb experts were checking a third car parked a few yards from the school.

A U.S. diplomat said on condition of anonymity that the center is a privately run English-language school and not affiliated to the U.S. government.

It is located in the same neighborhood as the residence of the American consul general in Karachi.

There was no immediate claim of responsibility for the attack.

Some Pakistani students from the center were injured in the first blast. Others were taking classes at the time and were told to stay inside.

Karachi is Pakistan's biggest city and has been a scene of bombings and terrorist attacks in the past.

In June 2002, a bombing outside the U.S. Consulate in Karachi killed 12 people.

In the past week, police have arrested seven militants from an extremist Islamic group, Harkat-ul-Mujahedeen al-Almi, blamed for a failed assassination plot on President Gen. Pervez Musharraf in April 2002 and the consulate attack. They also seized bomb-making materials and weapons, and police said the suspects had been planning further terrorist attacks.

Musharraf has enraged Islamic hardliners for his support of the U.S.-led war on terrorism after the Sept. 11, 2001, attack on America. In December last year he narrowly escaped two assassination attempts, 10 days apart, in a city near Islamabad.

The State Department has warned U.S. citizens to "defer non-essential travel" to Pakistan because "al Qaeda and Taliban elements continue to operate" there.