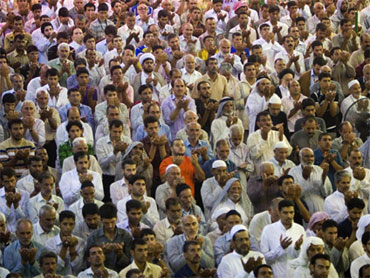 The pilgrims were on their way to Karbala to take part in an important religious holiday, known as Shabaniyah, that attracts devout Shiites from around the country.

There was no immediate claim of responsibility for the Monday bombings, but the method is the hallmark of Sunni extremists.

While violence has dropped dramatically in the past years in Iraq, suspected Sunni insurgents regularly target Shiite religious ceremonies and holy places in an attempt to re-ignite sectarian tensions that brought Iraq to the brink of civil war in 2005 and 2007.

The Shabaniyah festival marks the birth of Imam Mohammed al-Mahdi — known as the "Hidden Imam" — a Shiite saint who disappeared in the ninth century, and is held in the middle of the month preceding the Muslim holy month of Ramadan.

Devout Shiites believe the Hidden Imam will return someday to usher in peace and harmony in the world, and hundreds of thousands flock to Karbala for the celebration.

Earlier Monday in Baghdad, a suicide bomber driving a minibus blew himself up in front of the Baghdad office of a popular Arabic news station, killing six people and burying a lawmaker alive under the rubble of his collapsed home, police and hospital officials said.

The attack at the offices of pan-Arab news channel Al-Arabiya was a reminder of the persistent dangers both Iraqi and foreign journalists face in the country.

Al-Arabiya is among the most popular Arabic news stations. Militants view it as pro-Western, and its journalists have been singled out for attacks in the past.

The bomber made it through two checkpoints, casting further doubts on the capabilities of Iraqi security forces as U.S. combat troops prepare to pull out by the end of August.

The bomber was apparently waved through the two checkpoints leading to the station's office along a narrow street after security guards checked his identification, said Iraqi military spokesman Maj. Gen. Qassim al-Moussawi. The explosion occurred about 10 minutes after the bomber cleared the second checkpoint.

"This has the clear fingerprints of al Qaeda," al-Moussawi told Al-Arabiya. No one claimed responsibility for the blast, but al-Moussawi said documents had been found indicating al Qaeda was planning to target Arabic news channels and other media offices in the country.

A neighbor who lived next door questioned how the bomber could have got so close.

"What can we say? There are checkpoints. What are they doing?" said the man, whose shirt was speckled with blood. He declined to give his name, fearing retaliation, but said many members of his family were wounded in the attack.

The massive blast blew out windows in the two-story Al-Arabiya building and left much of the interior in shambles, with doors hanging off their frames. The street outside was littered with the smoldering hulks of at least nine cars, including one that appeared to have been hurled on top of another vehicle by the force of the explosion .

"Al-Arabiya condemns this brutal attack on its office and employees and all aggressions and operations targeting journalist whether in Iraq or any other place in the world," the Saudi-owned company said in a statement released by their Dubai headquarters.

Three guards, a driver, a passer-by and a 50-year-old cleaner died in the blast, police and hospital officials said. The attack also wounded 16 people, including former deputy prime minister Salam al-Zubaie, who lives nearby. The television company said four people were killed, including the guards and the cleaner.

The officials spoke on condition of anonymity because they were not authorized to brief the media.

Al-Zubaie, a member of parliament representing the Iraqiya list headed by former Prime Minister Ayad Allawi, was rescued from under the rubble of his home and underwent surgery, said Izzuldin al-Samarraie, an official in the lawmaker's office.

Iraqiya is locked in a tough battle with Prime Minister Nouri al-Maliki to determine who will be the country's next leader. Allawi himself came to the scene to inspect the damage.

Attacks on journalists were common during the height of Iraq's insurgency in 2006 and 2007, but have tapered off as security has improved in recent years.

According to the Committee to Protect Journalists, at least 142 journalists and media workers have been killed since March 2003.