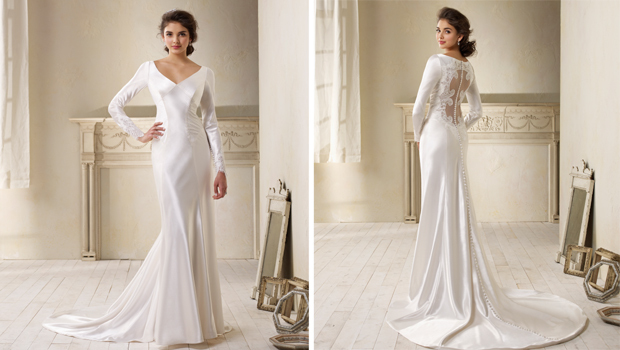 (CBS) "Twilight" fans can now walk down the aisle like Bella Swan.

An official replica of the Carolina Herrera-designed wedding dress that Kristen Stewart wears in "The Twilight Saga: Breaking Dawn - Part 1" hit stores on Tuesday. It was designed by bridal retailer Alfred Angelo and sells for $799.

The liquid satin sheath has long, lace-trimmed sleeves and a dramatic plunging cut-out illusion back detailed with a Chantilly-inspired lace applique, fabric-covered buttons and a chapel train. It's available in Alfred Angelo stores nationwide in sizes 0-30W.

The design house began working with  "Twilight" films producer Summit Entertainment back in May, according to the Wall Street Journal, so the replica would be ready in time for the film's premiere.

But if that's not close enough to the real thing for some Twi-hards, they'll just have to wait a little longer - Herrera announced Tuesday that she will begin selling the gown in her CHNY boutiques next year, according to Reuters. No details were given on how many dresses will be produced, or what they'll cost.

Tell us: Would you wear Bella's wedding gown?