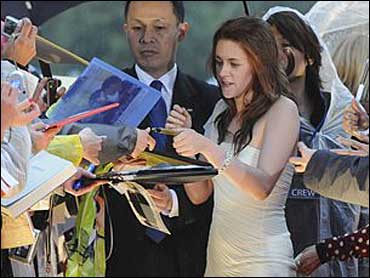 Dramas featuring "Twilight" star Kristen Stewart, Natalie Portman and "The Sopranos" co-stars James Gandolfini and Edie Falco are in the hunt for awards at the Sundance Film Festival.

The films are among 16 screening in Sundance's U.S. dramatic competition and were selected from more than 1,000 movies submitted to the festival, which runs Jan. 21-31 in Park City, Utah.

Sundance is dispensing with its opening-night tradition of premiering a film that is not competing for a prize. Instead, it will start with screenings of one dramatic competition film and one entry in the documentary competition. Those opening films will be announced later.

"We decided to launch into the competition rather than trying to find a film that encapsulates the whole eclectic group that follows," said John Cooper, a longtime Sundance programmer who is overseeing the show for the first time after being promoted to festival director in March.

The competition presents stars of past top prize winners at Sundance. Among them are Derek Cianfrance's marital drama "Blue Valentine," with Michelle Williams and Ryan Gosling, who starred in the festival's 2001 grand jury award winner "The Believer."

The 16 films in Sundance's U.S. documentary competition include "Casino Jack & the United States of Money," a study of corruption surrounding former lobbyist Jack Abramoff that was directed by Alex Gibney, whose "Taxi to the Dark Side" won the 2007 documentary Oscar.

Davis Guggenheim whose Al Gore global-warming story "An Inconvenient Truth" premiered at Sundance in 2006 and won the documentary Oscar for that year returns to the festival with the competition documentary "Waiting for Superman," which scrutinizes the American public-education system.

Also in the documentary competition are Jessica Hernandez's "Bhutto," a portrait of slain Pakistani leader Benazir Bhutto; Robin Hessman's "My Perestroika," which traces the lives of five Moscow residents after the Soviet Union's collapse; and Sebastian Junger and Tim Hetherington's "Restrepo," which examines the war in Afghanistan.

Sundance organizers also announced the lineup of 16 films each in the festival's world-cinema narrative and documentary categories.

Other titles among the festival's 113 feature-length films, including star-studded premieres screening out of competition, will be announced Thursday.
By David Germain