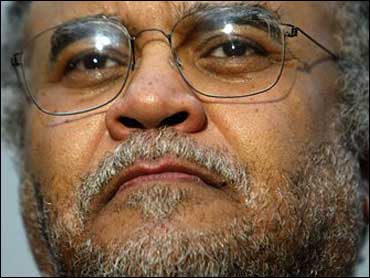 CBS Entertainment President Nina Tassler said the film, from the producers of the network's 2000 miniseries "Jesus," will focus on the late pope's life and times. An air date for the 2005-06 season was not announced.

The Polish-born Karol Wojtyla lived a rich and heroic life in turbulent periods including World War II, she said. The movie will dramatize how he received his calling to join the priesthood and his long reign as head of the Roman Catholic Church.

"There's something relatable and very heroic about him," Tassler said.

Cary Elwes ("Saw," "The Princess Bride") will play the young Wojtyla. Ian Holm (who played Bilbo Baggins in "The Lord of the Rings") portrays the pope in his later years.

The film is part of CBS' continued commitment to longform programming, Tassler said. Other movie projects are not so lofty: "Vampire Bats," a movie about mutant killer bats, and "Category 7: The End of the World," a "superstorm" disaster movie, also are set for next season.

"Martha Behind Bars," which dramatizes Martha Stewart's run-in with the law and stars Cybill Shepherd, will air Sept. 25 to help kick off the new season.

Asked if CBS intended to steal the thunder from Stewart's projects with competitor NBC, including a version of Donald Trump's "The Apprentice," Tassler said CBS is airing the Stewart movie because "it's a great concept" that could draw an audience.

Pressed again on the question of whether the film could hurt NBC, she replied: "We'll have to see."

Tassler also took a moment to savor a comeback for broadcasting, which is finally stemming viewer erosion and fielding shows that promote the kind of buzz long claimed by such cable hits as HBO's "The Sopranos."

"We've reclaimed control of the watercooler from cable," she said, referring to the popularity of series including CBS' "CSI" franchise and, on ABC, newcomers "Desperate Housewives" and "Lost."

The broadcast networks in general had virtually the same number of prime-time viewers this past season than they had in 2003-04, which is significant because viewership had dropped steadily, every year, since the 1993-94 season.