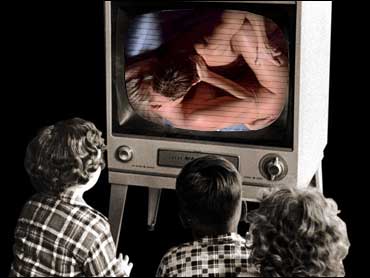 Sex on television is heating up, but more TV programs are including the risks and responsibilities of sexual behavior, a study released Tuesday found.

The percentage of shows depicting or implying sexual intercourse rose from 10 percent two years ago to 14 percent in the 2001-02 season, according to the Kaiser Family Foundation study.

The rate was even higher for the 20 top shows among teenage viewers: One in five of those programs, or 20 percent, included implied or depicted intercourse, the study found.

If television is becoming more boldly titillating, it's also more honest, according to the biennial study.

Among shows with depictions or talk about intercourse, 26 percent had a "safer sex" reference to topics such as abstinence or possible fallout from unprotected sex, the study found. That's double the rate found four years ago.

Of shows with any kind of sexual content — including talking about sex, kissing and intimate touching — 15 percent included such safer sex references, up from 10 percent two years ago.

A student facing an unplanned pregnancy on "Boston Public," a man diagnosed with AIDS on "ER," and a mother-daughter sex talk on "The Young and the Restless" were among examples cited by researchers.

For shows with sexual content involving teenagers, one in three, or 34 percent, included a safer sex reference, nearly double the 18 percent rate found four years ago.

"It's good to see that some in the Hollywood community are seizing the opportunity to play a positive role," said Vicky Rideout, the Kaiser Family Foundation vice president who oversaw the study.

The rate of sexually transmitted diseases and unwanted pregnancies, particularly among impressionable adolescents, makes such an approach important, Rideout said.

A majority of teenagers cite TV as an important source of information about sex, according to studies cited by the foundation. Other studies have found a correlation between watching TV programs with sexual content and the early initiation of intercourse, the Kaiser report said.

Why is the entertainment industry focusing more on sexual repercussions? Rideout suggests one reason is the effort by the Kaiser Foundation and other groups to bring attention to the issue.

For NBC's "ER," the first rule is entertainment, not education, said supervising producer Joe Sachs. "We have a double victory" if a show can accomplish both, he said.

"We always start with the emotional, dramatic needs of the characters," he said. "We never sit around the room and say, 'What can we do this week that will serve the public health of the nation?"'

But, he added, "we know that we have a responsibility, so we try to portray things accurately."

The study found that TV's fascination with sex in all its facets is holding steady.

The rate of shows with any sexual content, including sexual talk and touching, is similar to that found previously: 64 percent of all shows in the current study, compared to 68 percent two years ago.

"Among primetime shows, seven out of 10 have sexual content, so there's not too much room for more," Rideout said.

In the top 20 shows among teenage viewers, eight in 10 episodes, or 83 percent, had some sexual content, the study found.

"Sex on TV 3: Content and Context" looked at a random sample of more than 1,100 shows, including movies, drama and comedy series, soap operas, talk shows, newsmagazines and reality shows.

The study was designed by the foundation and Professor Dale Kunkel of the University of California, Santa Barbara, and was conducted by Kunkel and colleagues.

The Henry J. Kaiser Family Foundation is an independent philanthropic group that studies health care, including reproductive and AIDS-related issues. It is not affiliated with the Kaiser medical organization.