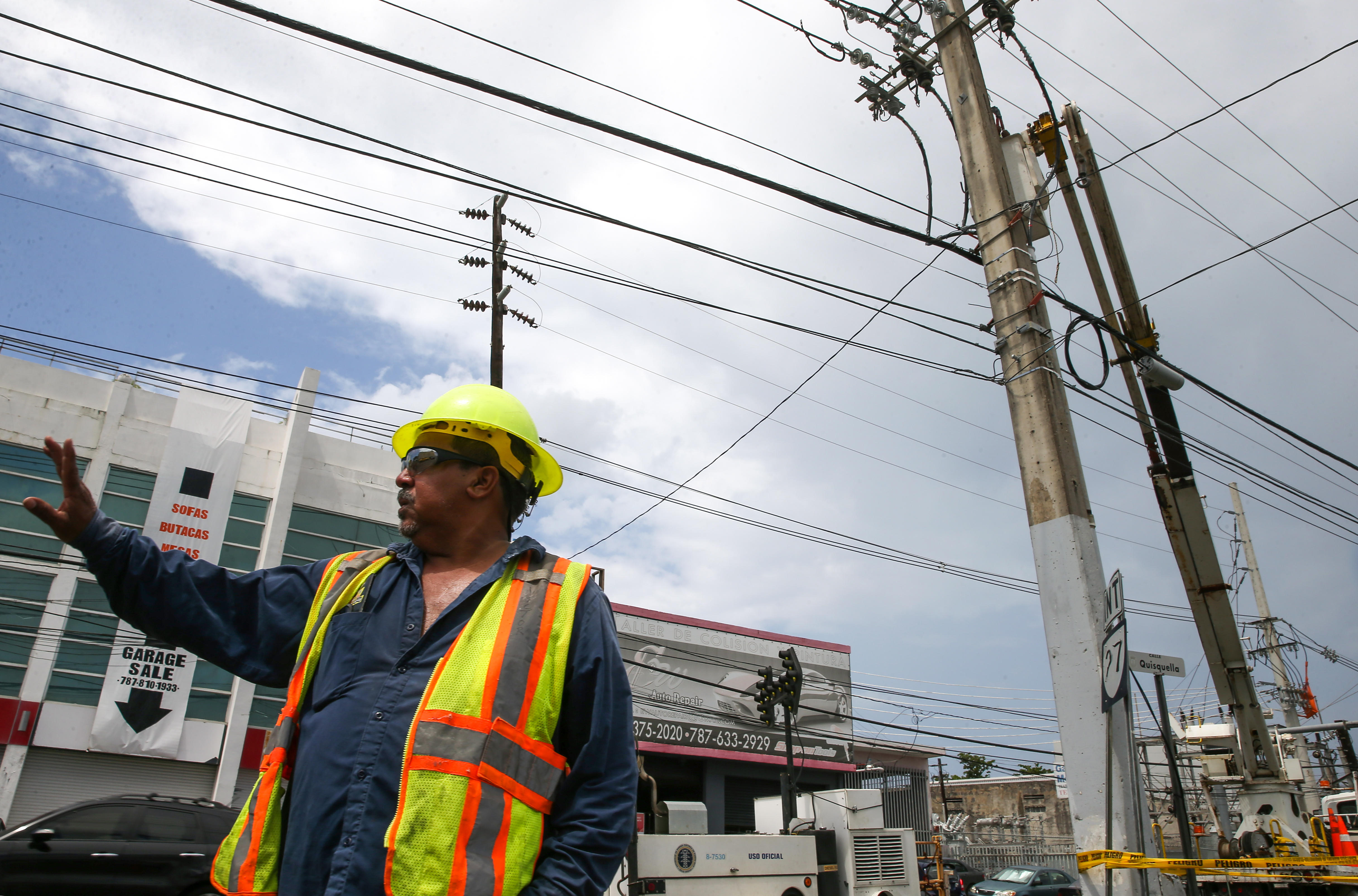 SAN JUAN, Puerto Rico -- Ten months after Hurricane Maria destroyed Puerto Rico's electric grid, the local agency responsible for rebuilding it is in chaos and more than $1 billion in federal funds meant to strengthen the rickety system has gone unspent, according to contractors and U.S. officials who are anxious to make progress before the next hurricane.

The Puerto Rico Electric Power Authority has seen two chief executive officers and four board members resign in less than a week in a messy fight over how much the bankrupt agency should pay its CEO. The agency's fourth CEO since the hurricane lasted less than 24 hours on the job last week before resigning amid public outrage over his $750,000 salary.

Gov. Ricardo Rossello on Wednesday named the former head of Puerto Rico's water and sewer agency as the fifth head of the electric company since Maria, at a salary of $250,000 a year. Jose Ortiz starts work Monday.

"In spite of missteps in the past, everybody will see that we have the right person at the right time," Rossello said.

The turmoil has fueled delays in launching $1.4 billion worth of work that includes replacing creaky wooden power poles vulnerable to collapse in the next storm, the chief federal official in charge of rebuilding Puerto Rico told The Associated Press.

"There is no permanent work that's been done," said Mike Byrne, the Federal Emergency Management Agency's assistant administrator for field operations. "What I'm worried about is the next level, the permanent work, the going in and building the grid the way I've been tasked to do by Congress."

From shut-down medical equipment to the spread of waterborne diseases, the cascading effects of power grid failure likely led to hundreds of deaths in the aftermath of the Category 4 hurricane, although the exact number remains a subject of debate and ongoing investigation.

"The one reason why so many people died in the aftermath of the hurricane was the lack of energy," said opposition Sen. Eduardo Bhatia. "And the lack of energy comes from how fragile the system was because of years of neglect."

Several hundred Puerto Ricans remained without power Thursday in the longest-running blackout in U.S. history. The entire island remains vulnerable because much of the massive damage from the storm was resolved with temporary fixes likely to fail in the next hurricane.

These include thousands of weakened and damaged poles and power lines that were reused in the absence of new supplies. In some cases, lines were bolted to trees.

The Puerto Rico power authority notified three large mainland U.S. companies in March that they had been selected to carry out $1.4 billion worth of contracts that includes finishing emergency restoration work and beginning the long-term task of overhauling the power grid. Nearly four months later, the agency has not issued the final orders required to send the linemen into the field to do the permanent work, according to federal officials and some contractors.

The power authority has not explained why, and a spokesman did not return repeated AP calls for comment.

As with virtually all post-hurricane disaster relief in Puerto Rico, the work is contracted and paid for by bankrupt local agencies using money disbursed by FEMA from billions appropriated by Congress.

The board created by Congress to oversee Puerto Rico's finances and bankruptcy-like proceedings reviews the government's major contracts. In May, it found problems with the contracts of two of the power companies chosen to do the first stages of permanent work. These include vague descriptions of the scope of the project and a lack of detailed evaluation of costs.

Ortiz, the power authority's new head, indicated potential problems with at least one of the contractors, Cobra, a subsidiary of Oklahoma-based Mammoth Energy. Cobra has been awarded more than $1.8 billion in federal money, at rates of about $4,000 per worker per day in many cases. Ortiz said the cost of the contractors would be getting a second look.

"It will be reevaluated," he told reporters Wednesday. "Certainly the numbers merit being looked at very closely."

The problems at the power authority are prompting calls for urgent change to Puerto Rico's decades-old system of putting its power generation and transmission under the control of a government agency run by the governor's appointees rather than an independent, government-regulated corporation, as occurs in virtually all other parts of the United States.

Rossello has proposed privatizing the generation of energy and awarding concessions to private contractors for power transmission and distribution. Puerto Rico legislators have approved a measure that would allow for those changes, and they expect to approve another bill in coming months to establish a regulatory framework.

For many on and off the island, that isn't fast enough.

"PREPA needs to be depoliticized in order to be a functional, modern and reliable utility. The people of Puerto Rico deserve at least that much," said Utah Republican Congressman Rob Bishop, who oversees Puerto Rico issues as chairman of the House Committee on Natural Resources. The committee will hold a July 25 hearing on the power company's future.

Agency employees say that for decades, near-total control by the governor's office has led to the power authority being stuffed with unqualified, politically connected managers. Political influence also drove a string of unrealistic, expensive projects that were cancelled by subsequent administrations.

The electric company was also used as a piggybank for the commonwealth's government by providing years of power to government agencies that didn't pay their bills, and highly discounted rates to important island businesses like major hotels.

Essential maintenance like trimming trees back from power lines and replacing decrepit poles was delayed for years, even decades.

In May 2017, Puerto Rico filed for the biggest municipal bankruptcy ever in the U.S. The government carries a $70 billion public debt load, which includes more than $9 billion held by Puerto Rico's power company.

Bankrupt and debilitated by mismanagement, the Puerto Rican electric grid was already in a state of near-collapse when Maria devastated the island in September and left millions without power.

That has been followed by a cascade of CEO departures at the power authority.

First to go was Ricardo Ramos, amid allegations that he hired an underqualified power contractor, Whitefish. His temporary successor was replaced by Walter Higgins, a veteran power executive.

But on July 11, just four months into the job, Higgins resigned. Among the factors influencing his decision, he said, was that compensation details stipulated in his contract could not be met. A month earlier, Puerto Rico's justice secretary had said it would be illegal for a public employee like Higgins to receive bonuses on top of his $450,000 salary.

Power company officials then named board member Rafael Diaz as the new CEO, with a $750,000-a-year salary. Diaz lasted only a day, resigning along with four other board members after Gov. Rossello criticized his salary and said those unwilling to adjust their compensation expectations amid an 11-year recession should step down.

The rapid turnover has set off alarm among ordinary Puerto Ricans and criticism from Rossello's political opponents.

"The economy is being affected, the quality of life is being affected and the lives of people who depend on the electrical system are being put at risk," said Rolando Ortiz, who oversees an association of mayors from the opposition Popular Democratic Party.

Byrne, the FEMA administrator, said stability was urgently needed at the power authority in order to protect Puerto Rico from future disasters.

"This is a whole machine of activity that needs to take place," Byrne said. "It needs a director, it needs leadership it needs capability."

"The sooner we get moving, the better for all involved," he said.