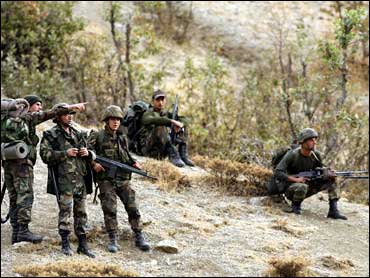 Turkey said dozens of its warplanes bombed Kurdish rebel targets as deep as 60 miles inside northern Iraq for three hours Sunday in the largest aerial attack in years against the outlawed separatist group. An Iraqi official said the planes attacked several villages, killing one woman, and the rebels said two civilians and five rebels were killed.

In the nighttime offensive, the fighter jets hit rebel positions close to the border with Turkey and in the Qandil mountains, which straddle the Iraq-Iran border, the Turkish military said in a statement posted on its Web site. It said the operation was directed against the rebels and not against the local population.

As many as 50 fighter jets were involved in the airstrikes, private NTV television and other media reported. Turkey has recently attacked the area with ground-based artillery and helicopters and there have been some unconfirmed reports of airstrikes by warplanes.

"This operation, which was carried out under night conditions, was a success," Erdogan said Sunday. "Our struggle (against the PKK) will continue inside and outside Turkey with the same determination."

The pro-Kurdish news agency Firat, citing the PKK, said two civilians and five PKK rebels were killed in the raids. The airstrikes destroyed two schools and a hospital, it said in separate reports, adding that the hospital had been vacated in anticipation of a Turkish attack.

Turkey has massed tens of thousands of troops along its border with northern Iraq in response to a series of attacks by the PKK rebels. In October, parliament voted in favor of authorizing the government to order a cross-border operation against the group, which seeks autonomy for the Kurdish minority in southeastern Turkey.

The United States and Iraq have, however, called on Turkey to avoid a major operation, fearing such an offensive could disrupt one of the most tranquil regions in Iraq.

Harsh winter conditions in the rugged terrain of northern Iraq reduce the possibility of a large-scale ground offensive, making more airstrikes against the PKK likelier than attacks using tanks or helicopters. Limited and precise air raids are also less likely to hurt Turkey's alliance with the U.S. and Europe or to affect global oil prices than a protracted land battle.

The mountain is a base for the PKK's leadership council and the group has a network of camps around the mountain. But news reports in the past weeks have suggested that PKK fighters may have dispersed from camps in northern Iraq, worried about a possible attack from Turkey.

Abdullah Ibrahim, a senior official in the Iraqi administrative center of Sangasar, said Turkish warplanes bombarded 10 Kurdish villages, killing one woman and injuring two others. He acknowledged that there were Kurdish rebel bases in the area, but said they were far from the villages that were hit.

"The villagers are now scared and are hiding in nearby caves. They lost all their properties," Ibrahim said.

Villages are scattered in the Qandil mountains, some as far as an hour's drive apart over steep roads and paths.

The attack came a month after the United States promised to share intelligence with Turkey about the PKK.

Turkish forces have periodically shelled across the Iraqi border, and have sometimes carried out "hot pursuits" — limited raids on the Iraqi side that sometimes last only a few hours.

The military said the airstrikes began at 1 a.m., with all planes returning to their bases safely by around 4:15 a.m. The army then continued firing on the targets with long-range weapons, the military said.

The PKK has been fighting for autonomy in the predominantly Kurdish southeast for more than two decades. There has been intense public pressure on the government to attack rebel bases across the border as rebel attacks have increased in recent months.