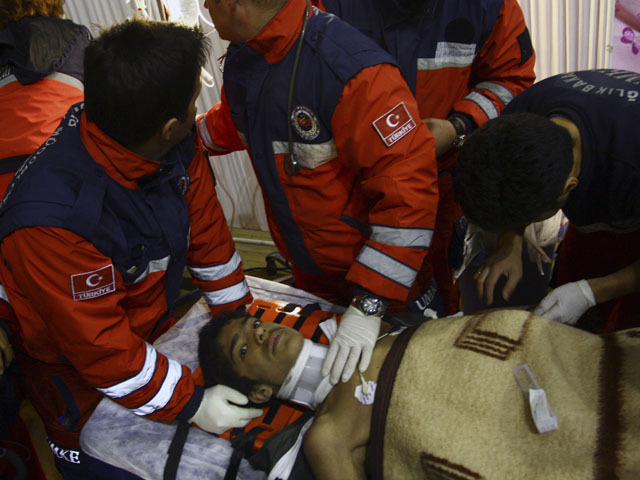 ERCIS, Turkey - Rescuers, working under floodlights, pulled a 13-year-old boy alive from the rubble of a collapsed apartment building early Friday, over 100 hours after a massive earthquake leveled many buildings in eastern Turkey, killing at least 550 people.

A picture by the state-run Anatolia news agency showed a rescue team carrying, Ferhat Tokay, out of the debris, wearing a neck brace. In other pictures from a field hospital, he appeared conscious and looking at his rescuers.

The agency said the boy was injured but did not give further details. The collapsed building from which Tokay was rescued was in Ercis, the town worst hit by the quake.

On Thursday, rescuers pulled a young man alive from the rubble of a collapsed building four days after the earthquake. Television footage showed a rescue team cheering and clapping as the man, wearing a red sweater and strapped to a stretcher, was carried out of the debris. His eyes were shut most of the time, but he opened them at one point. He could not move his head, which was held steady in a brace.

"God is great," someone shouted. Other rescuers shouted instructions to each other.

The Anatolia news agency said the man, identified as 18-year-old Imdat Padak, was rescued by an Azerbaijani crew. It said he was flown to the nearby city of Van and was dehydrated, but in good condition. Padak lives in the village of Kiziloren and was attending university preparation courses in Ercis, which was hardest hit by the 7.2-magnitude quake that struck Sunday.

Emergency officials said 2,300 people were injured and 186 have been rescued from the rubble. About 2,000 buildings have been destroyed and authorities declared another 3,700 buildings unfit for habitation.

Families who did snag precious aid tents shared them with others. But some people spent a fourth night outdoors huddled under blankets in front of campfires, either waiting for news of the missing or keeping watch over damaged homes.

As survivors gathered pieces of wood to light campfires or stove-heaters, The Red Crescent and several pro-Islamic groups set up kitchens and dished out soup or rice and beans.

Sermin Yildirim, eight months pregnant, was sharing a tent with a family of four who were distant relatives, along with her own twins and husband. Her family was too afraid of returning to their apartment.

"It's getting colder, my kids are coughing. I don't know how long we will have to stay here," Yildirim said. "We were not able to get a tent. We are waiting to get our own."

Muhlise Bakan, 41, was not happy to share her tent with her husband's second wife, Hamide.

"I have four children, she has five," Bakan said. "We were sleeping in separate rooms at our house, and now we are sleeping side by side here."

However, she acknowledged the two women were now "closer" as they struggled together in hard times. Turkish law does not recognize second marriages, but some conservative men in the country's southeast still marry more than one wife in religious ceremonies.

"I am very sick, I need medicine," said Kevsel Astan, 40, who had a kidney transplant four years ago.

She said she was being treated at the state hospital until the quake struck. The damaged hospital was evacuated and doctors were focusing on emergency cases.

Burke Cinar, a sociologist with a Turkish foundation, said the group was trying to get tents for the families of 15 children with leukemia in Ercis.

Looking ahead, Turkey's weather agency predicted intermittent snowfall for the next three days.

Saudi King Abdullah ordered a $50 million donation to help Turkey deal with the aftermath of the quake, the official Saudi Press Agency said.

Syrians who had fled across the border to Turkey to escape violence in their homeland donated blood for the injured, the Anatolia news agency reported.

Search and rescue operations ended in the provincial capital of Van, state-run TRT television said. But searchers in bright orange raincoats continued digging through debris in Ercis, 55 miles to the north.

They pulled out the bodies of two dead teenage sisters and their parents who were holding hands, and a mother clutching her baby boy, according to media reports.

Two teachers and a university student were rescued from ruined buildings Wednesday. One of the teachers later died in the hospital.

The region has been rocked by hundreds of aftershocks. On Thursday, a 5.4-magnitude tremor hit the neighboring province of Hakkari, sending people rushing out of buildings in panic. No damage was reported but NTV television said some people were slightly injured trying to escape through windows.