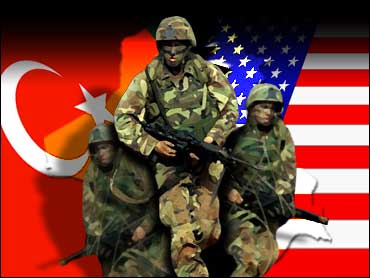 A top member of Turkey's governing party on Sunday rejected a quick new vote on letting U.S. troops use the country to open a northern front against Iraq — a second harsh blow to U.S. war planners in as many days.

After a revolt in its ranks Saturday, the Islamic-rooted ruling party is in disarray, torn between popular opposition to war and fears of possible lasting damage to the historically close ties with Washington.

"Trust between the United States and Turkey is in breakdown," said Huseyin Bagci, professor of International Relations at Ankara's Middle East Technical University. "The decision is good for Turkey's democracy, but bad for the U.S.-Turkish strategic relationship."

Eyup Fatsa, deputy head of the governing party's parliamentary group, said there would be no quick revote after Turkey's parliament Saturday failed to approve a government-backed motion to allow 62,000 U.S. combat troops in the country for a possible war against neighboring Iraq. The move was rejected despite the party's overwhelming majority in parliament.

The decision stunned Washington and seriously jeopardizes U.S. planning for a northern front against Iraq, a crucial part of the American war strategy.

The ruling Justice and Development Party had also placed its prestige on the line, with leaders pressing legislators to vote for the motion. But almost 100 of the party's 362 legislators defected, raising the possibility of disunity and political instability as the United States prepares for a war in neighboring Iraq.

"The proposal has been delayed to an open-ended time. There is no proposal for the foreseeable future," Fatsa told reporters at a Justice party meeting Sunday on whether to resubmit the motion to parliament, which next convenes on Tuesday.

It is not clear why the government was delaying a new vote.

Some legislators may fear that pushing forward with a vote could split the party between hardline factions that oppose the war and the more pragmatic legislators who believe that not supporting Washington could have devastating consequences for Turkey's economy.

The Justice party, which is rooted in Turkey's Islamic movement, unites factions that are more traditional and religious with a more pragmatic group.

The impact on Turkey's economy could be swift.

"There could be a mini-crisis Monday morning when markets reopen," warned Bulent Aliriza, director of the Turkey project at the Washington-based Center for Strategic and International Studies.

Washington had been offering Turkey $15 billion in loans and grants to help cushion the Turkish economy if there is a war. The critical economic pad could be lost now, although neither side has discussed the future publicly.

Ships carrying equipment and some of the 62,000 U.S. troops who would be based in Turkey are already off the Turkish coast, a sign of how sure Washington was of Turkish support.

For the United States, parliament's failure allow deployment of the troops leaves in question the U.S. war strategy, which called for a northern front against Iraq to divide Saddam Hussein's forces.

For Turkey, in addition to the possible loss of a huge tranche of U.S. funds, Ankara could lose a say in the future of neighboring Iraq if there is a war. That is a critical issue for the Turks, who fear that a war could lead Kurds in northern Iraq to declare an independent state and in turn inspire Turkey's own Kurdish minority.

Turkey is also likely to lose the U.S. goodwill that Ankara had counted on to help lobby European nations in its bid for membership in the European Union. Also at stake is U.S. backing with the International Monetary Fund.

Turkish leaders Sunday sought to downplay such concerns, emphasizing instead the strength of ties between the five-decade-long NATO allies.

"We will continue these relations with mutual friendship and mutual understanding. These (relations) shouldn't be bound to a motion," Prime Minister Abdullah Gul said.

Justice Party leader Recep Tayyip Erdogan also sought to ease concerns that a crisis was brewing within the governing party. Among the dissenters in Saturday's vote was Deputy Prime Minister Ertugrul Yalcinbayir.

"By our party not taking a group decision on this critical issue, we carried out democracy within the party," Erdogan said.