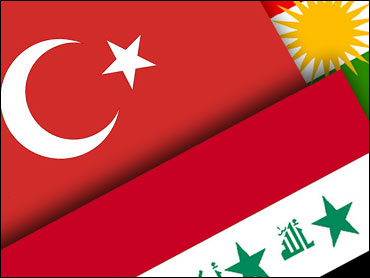 Turkish warplanes bombed Kurdish rebel targets in northern Iraq on Saturday in the third confirmed cross-border offensive by Turkish forces in less than a week, the military said.

The U.S. Embassy in Ankara said it was informed before the assault took place, but gave no further information. The United States and Iraq both have urged Turkey to avoid a major operation in the area, fearing it could destabilize what has been the calmest region in Iraq.

The bombing lasted nearly a half-hour on Saturday afternoon, and was followed by shelling from inside Turkish borders, the military said in a statement posted on its Web site. It did not say how deep into Iraqi territory the warplanes penetrated, or which areas were shelled.

It vowed to continue military operations on both sides of Turkish-Iraqi border "no matter how the conditions are."

Two days after the first air assault, Turkey sent hundreds of troops into northern Iraq, but withdrew them later in the day. The military said the two operations dealt a major blow to the rebels.

In Saturday's statement, it said hundreds were killed in the operations, citing "intelligence gathered from various sources." It said footage showing the results of the operations would be released in coming days.

Turkish forces periodically have shelled across the border, and sometimes have carried out "hot pursuits" - limited raids on the Iraqi side that sometimes last only a few hours.

The rebels have battled for autonomy in southeastern Turkey for more than two decades, and use strongholds in northern Iraq for cross-border strikes.

After a surge in rebel attacks in the past months, Turkey has said it can no longer tolerate the attacks on its troops, and in October Turkey's Parliament authorized the military to strike back at the rebels inside Iraq.

In a Nov. 5 meeting with Turkish Prime Minister Recep Tayyip Erdogan, President Bush declared the PKK a "common enemy," and promised to share intelligence on the group.

Washington has been providing Turkey with intelligence to go after the rebels, and a coordination center has been set up in Ankara so Turks, Iraqis and Americans can share information.

But the U.S. Embassy declined to say whether American intelligence was involved in Saturday's offensive.

The U.N. High Commissioner for Refugees reported that more than 1,800 people fled their homes in parts of northern Iran, and Iraqi officials have complained that Turkey's actions are a violation of Iraqi sovereignty. They have also said they recognize the threat posed by the PKK.