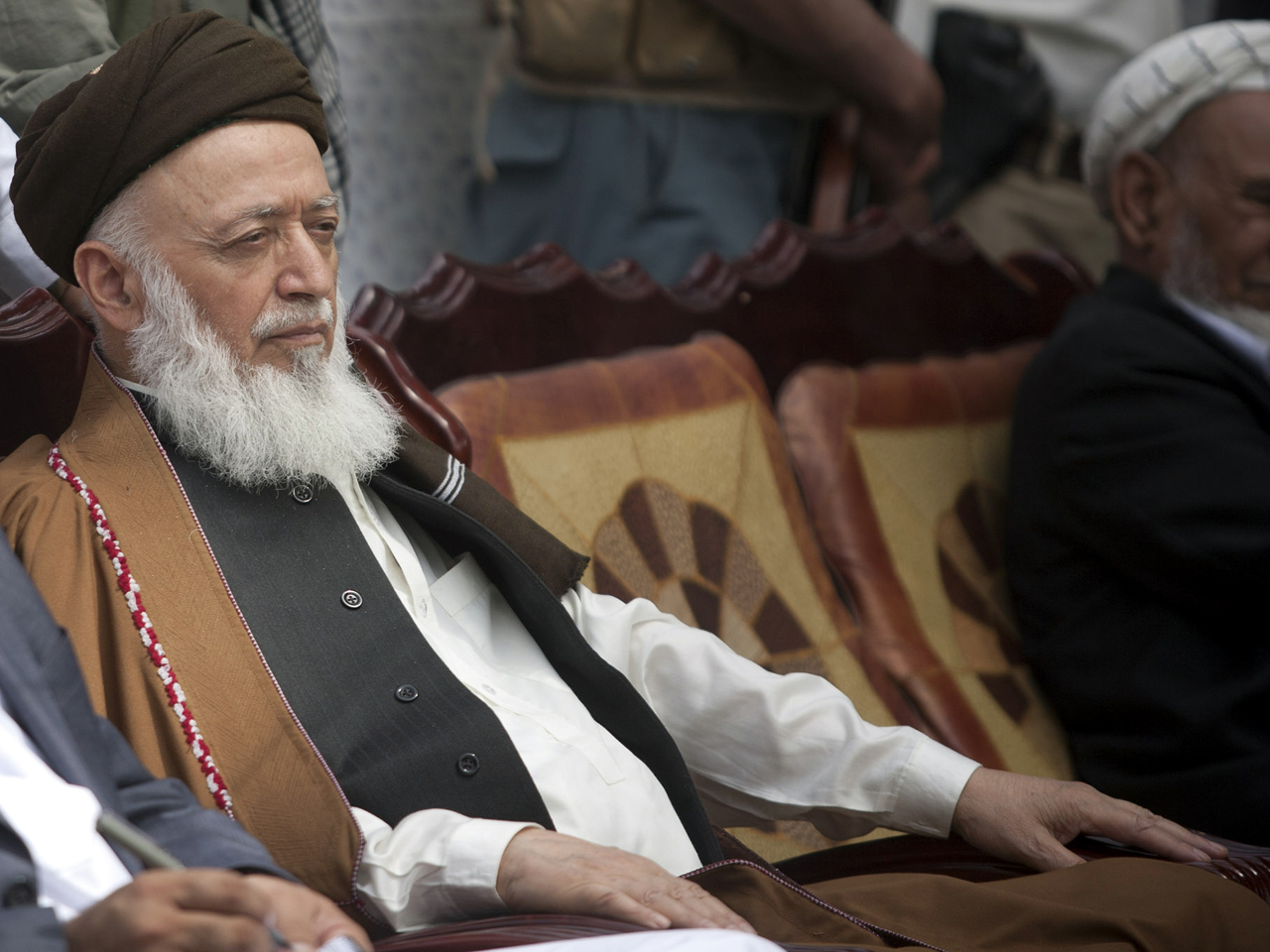 KABUL, Afghanistan - A suicide bomber posing as a Taliban peace envoy assassinated a former Afghan president who for the past year headed a government council trying to negotiate a political settlement with the insurgents.

Tuesday's attack, carried out in former Afghan President Burhanuddin Rabbani's Kabul home by a militant who detonated explosives hidden in his turban, dealt a harsh blow to efforts at ending a decade of war.

President Hamid Karzai cut short a visit to the U.S., calling on Afghans to remain unified in the face of Rabbani's "martyrdom." Rabbani's death came days after a daytime assault by insurgents on the U.S. Embassy and NATO headquarters, deepening a sense of insecurity in the capital.

NATO said in a statement that two suicide bombers were involved in the attack on Rabbani, both of them men who had feigned a desire to reconcile with the government. It was unclear if a second bomber was able to detonate his explosives.

Afghan officials, however, insisted there was only one attacker. Four of Rabbani's bodyguards also died and a key presidential adviser was wounded in the bombing, they said.

Fazel Karim Aimaq, a former lawmaker from Kunduz province and a friend of Rabbani's, told reporters outside the former president's home that Rabbani had come back from a trip to Iran in order to meet with a man who had been described as a high-ranking Taliban contact. The visitor was shown into the house but not fully searched, Aimaq said. When Rabbani appeared, the man shook the former president's hand and bowed as a sign of respect, Aimaq said.

"Then his turban exploded," he said. Police confirmed that the bomb had been hidden in the turban.

"Just when Afghanistan needs to create unity in its ranks, there will be more divisions after President Rabbani's killing," a Pakistani intelligence official told Bokhari.

Van Dyk met Rabbani in 1981 and last saw him in late 2006. Rabbani was a follower of the Muslim Brotherhood intellectual Sayeed Qutb, who was Osama bin Laden's favorite author and probably had the greatest intellectual influence on al Qaeda, Van Dyk reports. In an interview in 2006, Rabbani told Van Dyk that he brought Qutb's books to Kabul, thus introducing the group's fundamentalism to Afghanistan.

As an indication of the power he held in Afghanistan, Rabbani was the one who gave permission for bin Laden to land at Jalalabad airport when he returned from Sudan, Van Dyk reports.

But, Van Dyk reports, Rabbini's killing has nothing to do with Islam.

"He is, at heart, as fundamentalist and as religious as the most fundamentalist Muslim in the world," said Van Dyk. "It is very dangerous for the stability of Afghanistan."

Rabbani's death will dent efforts to keep in check the regional and ethnic rivalries that partly feed the insurgency. As one of the wise old men of Afghan politics and the leader of the anti-Taliban Northern Alliance, Rabbani's role in the attempts to seek a political deal with the Taliban — with U.S. blessing — will be hard to replace soon. His death could unleash a well of resentment among some senior Northern Alliance members, who accuse Karzai of colluding with the Taliban.

Already Afghanistan's ethnic minorities have begun to rearm in the face of negotiations with the Taliban. Rabbani's death is likely to accelerate that process and lay the foundation for a possible civil war once U.S. combat troops leave the country or take on support roles by the end of 2014.

President Obama said the killing will not deter the U.S. and Afghanistan from helping that country's people live freely. He said the former president's death is tragic because he was a man who cared deeply about Afghanistan. Mr. Obama commented at the start of a meeting in New York with Karzai.

Shukria Barakzai, a lawmaker from Kabul, was visibly shaken as she stood outside Rabbani's house in the Wazir Akbar Khan area of the city, near the U.S. Embassy and NATO headquarters.

"We don't want the whole peace process to get stuck," she said. "We have to continue, we have to."

Rabbani, who was about 70 years old, headed the country's High Peace Council, set up by the Afghan government to work toward a political solution to the decade-long war. It had made little headway since it was formed a year ago, but it was backed by many in the international community as an important first step toward a settlement.

"He was a respected former president of Afghanistan and played a vital role as the chairman of the Afghan High Peace Council," Cameron said. "He will be sorely missed but the work of the Peace Council will go on. We remain determined to see Afghanistan prosper."

Rabbani was president from 1992-1996, heading the Afghan government that preceded the Taliban rule. After he was driven from Kabul in 1996, he became the nominal head of the Northern Alliance, mostly minority Tajiks and Uzbeks, who swept to power in Kabul as a U.S.-led invasion toppled the Taliban regime in late 2001. Rabbani, an ethnic Tajik, headed the Jamiat-e-Islami political party.

Karzai's adviser Mohammad Masoom Stanekzai was wounded in the attack. A relative who answered Stanekzai's phone said that the wounds did not appear to be life-threatening, but that Stanekzai was in the hospital. The relative declined to give his name because of the sensitivity of the situation.

Stanekzai is a top official with the High Peace Council and the head of a reintegration program for mid- and lower-level Taliban back into Afghan society. The program has so far managed to reintegrate only about 2,000 of the estimated 25,000-40,000 insurgents in Afghanistan.

Reintegration was the other half of reconciliation, which aims to broker a peace deal with the senior Taliban leadership.

Last week, Rabbani led a conference of provincial governors and officials who met in the southern city of Kandahar to develop policies for reintegrating insurgents who want to give up the fight. At the conference, he urged those in the provinces to counter insurgent propaganda claiming that international forces were invaders in Afghanistan.

Pakistan's Prime Minister Yusuf Reza Gilani and President Asif Ali Zardari condemned the assassination. They conveyed their "extreme anger and shock" to the Afghan government over the killing, according to a statement released by the Pakistan government.

Taliban factions based in northwest Pakistan and allegedly supported by elements of the Pakistani security forces have been blamed by Afghan and U.S. authorities for high-profile attacks in Afghanistan, especially in Kabul, over the past three years.

Barakzai said that residents of Kabul were tired of the constant attacks in the city, including a 20-hour assault against the U.S. Embassy and NATO headquarters in Kabul that finally ended Sept. 14. That attack killed 16 Afghans — five police officers and 11 civilians, more than half of them children. No one at the embassy or NATO was killed.

"Every single week we have such an attack," she said.

U.S. and Afghan officials have blamed the Pakistan-based Haqqani network for carrying out that attack and others in the capital and openly stated that the insurgent group has ties to the Pakistani government — a rare public shot at the role Afghanistan's neighbor to the east plays in bolstering the insurgency.

Abdullah Abdullah, a Tajik leader who lost to Karzai in the 2009 presidential election, said Rabbani's death was significant.

"He was a jihadi leader. From the beginning to the end of his life he did his best to bring peace and stability to this country, and it is a big loss for all Afghan people," Abdullah said.

Abdullah, who has been critical of Karzai's attempts to reconcile with the Taliban, said "we should recognize and know our enemy from lower ranks up to the top officials of the country because by any means, by any way, they are trying to kill us and eliminate all high-ranking officials and jihadi leaders."

The Taliban have been targeting senior officials in the government and close associates of Karzai.

On July 27, an insurgent with a bomb under his turban killed the mayor of Kandahar, Ghulam Haider Hamidi. Five days earlier, a close associate gunned down Karzai's powerful half brother, Ahmed Wali Karzai, at his home in Kandahar. During Karzai's funeral a turban bomber killed a prominent cleric.

That same month, Karzai's inner circle suffered another hit when gunmen in Kabul killed Jan Mohammad Khan, a presidential adviser on tribal issues and a former governor of Uruzgan province, which is also in the south.

The killings prompted Karzai to urge Afghan religious leaders to condemn the use of turban bombs.