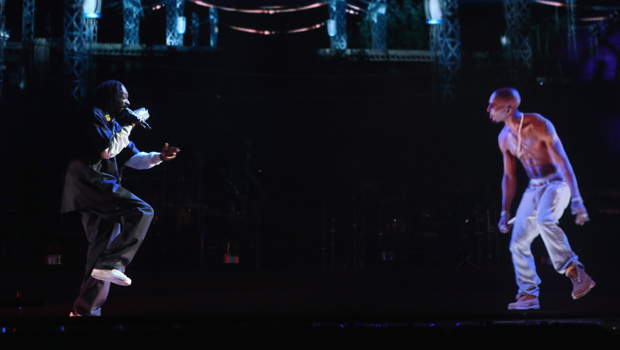 (CBS News) At the first weekend of the Coachella Valley Arts & Music festival, rappers Snoop Dogg and Dr. Dre, who were headlining the final night of the big festival, brought several guest stars to join them onstage, including the rapper Tupac - who died 15 years ago.

The late California rapper took form via an incredible hologram and performed "Hail Mary" and joined Snoop for "2 of Amerikaz Most Wanted."

Tupac's image came on the stage and greeted the crowd saying, "What up, Coachella!" wearing baggy jeans, Timberlands, with no shirt.

In addition to Pac, Tony Yayo, Warren G, Kurupt and even 50 Cent joined the rap duo on stage. 50 cent performed his hit "In Da Club." Eminem also joined Dr. Dre to perform "Forgot About Dre," "I Need a Doctor" and his own song "Till I Collapse."

A similar act is expected to happen this Sunday at the festival's first-ever second weekend, in which all the same acts will perform again to accommodate those who missed out the first time around.

Other headliners of the festival included Radiohead and The Black Keys.