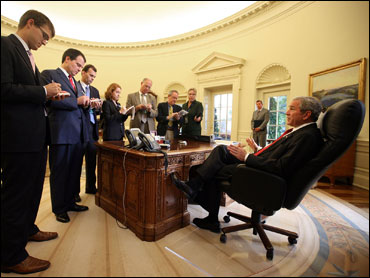 (White House/Joyce N. Boghosian)
Mark Knoller is a White House Correspondent for CBS News. Under growing attack by the democratic leaders in Congress, President Bush has stepped up his efforts to publicize his message.

In a highly-unusual move this morning, he hastily called a pool of reporters into the Oval Office to preview the speech he was giving three hours later to The Heritage Foundation, a leading conservative think tank.

He made it sound very much like the speech we heard him deliver last week at National Defense University. He thinks Americans must be reminded that we are still a nation at war and need to act accordingly. He said he'll again call on Congress to pass the measures that give the government the tools it needs to fight that war — including the bill authorizing warrantless wiretaps of terror suspects abroad.

He also made clear his irritation at the delay in the Senate Judiciary Committee in voting on his nominee for Attorney General Michael Mukasey — whom he said is needed as a key member of the administration's national security team.

By giving the preview himself, Mr. Bush added new urgency to his message of the day. It meant that during the three hours before his speech, reports about what he would say would get headline-treatment on radio, TV and news websites.

Only a handful of reporters attended the briefing by Mr. Bush, led by AP and Reuters – the two major news services to which nearly all other news organizations in the country subscribe.

TV reporters got an immediate read-out from their representative in the session. In the back of the White House briefing room, Mike Emanuel of Fox News told the rest of us what Mr. Bush said. Emanuel was obligated to share every bit of information. It was his network's turn in the White House Press Pool. ABC, CBS, CNN, Fox and NBC rotate pool duty on a day-by-day basis.

Jon Ward of the Washington Times was the print pooler in the session – and wrote up his own report on the session which was distributed a short time later to all members of the White House press corps by e-mail. The White House also issued a transcript of Mr. Bush's remarks to the pool – but not until some two hours after the fact.

For much of his presidency, Mr. Bush has been reluctant to scoop himself by telling reporters in advance what he expects to discuss in a forthcoming speech. His usual practice has been to tell reporters to "be there" or "tune in."

But with less than 15 months left to his presidency, and with so much focus on the candidates seeking to replace him, it's clear he's trying to remind us all that he still has the job and must not be ignored.

Remember what he said at his last news conference October 17:

Up until the moment he made his remarks this morning, the speech he was to give later in the day was getting very little attention. His remarks changed that.

He pulled a similar PR stunt last week on leaving the White House to assess the destruction of and federal response to the wildfires in California. Before boarding Marine One at 7:30 a.m., he walked over to reporters to give us a preview of why he was going and what he expected to see and say once he arrived in San Diego. That gave his trip new importance — and for the next five hours while he was out of pocket flying west — his trip and intentions were being reported again and again.

No question we'll be seeing him do more of this kind of thing between now and the day he leaves office.