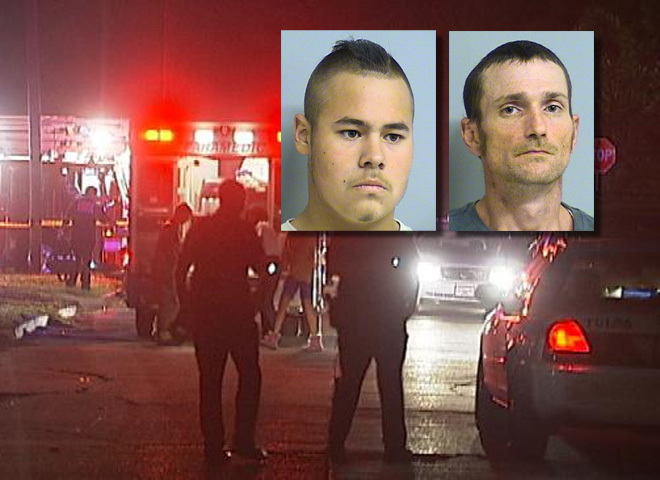 Jake England, 19, and Alvin Watts, 32, appeared via closed-circuit television from jail. Both are being held on suspicion of three counts of first-degree murder, two counts of shooting with the intent to kill and one count of possession of a firearm in the commission of a felony. They will be formally charged at a later date.

Neither man had an attorney present Monday. The judge set bond at $9.16 million apiece and scheduled their next appearance for April 16.

Police have identified both suspects as white, while all five victims in the early Friday shootings were black. Police and the FBI cautioned that it was too early to say whether the attacks in Tulsa's predominantly black north side were racially motivated. Police spokesman Jason Willingham said that based on Facebook postings attributed to England, a wish to avenge the death of his father might have been a factor.

A Thursday Facebook update that appeared to have been written by England blamed his father's death on a black man and used a racial slur. The posting said Thursday was the second anniversary of his father's shooting death.

"It's hard not to go off," given the anniversary and the death of his fiancee earlier this year, the posting said.

"It's apparent from the posting on the Facebook page that he had an ax to grind, and that was possibly part of the motive," Willingham said. "If you read the Facebook post and see what he's accused of doing, you can see there's link between the two of them."

The Facebook page had been taken down by Sunday afternoon.

On Sunday, several dogs guarded the house where the two men lived, CBS News correspondent Anna Werner reports. A woman who pulled up there didn't give her name, but said in England's defense, "His head is not on straight. He needs help. He needs help ... Jake is not a bad person. He is really not."

A family friend, Susan Sevenstar, told The Associated Press that England was "a good kid" and "a good, hard worker," who "was not in his right mind" after losing his father and the January suicide of his fiancee, with whom he'd recently had a baby.

"If anybody is trying to say this is a racial situation, they've got things confused," said Sevenstar, who described England as Cherokee Indian. "He didn't care what your color was. It wasn't a racist thing."

The Tulsa World reported that England's father, Carl, was shot in the chest during a scuffle with a man who had tried to break into his daughter's apartment. England later died. The man charged in the shooting is serving a six-year sentence on a weapons charge, according to Department of Corrections records.

Acting on an anonymous tip and backed by a helicopter, police followed England and Watts from the home they shared in Turley and arrested them Sunday without incident, police said.

Task force commander Maj. Walter Evans said investigators recovered a weapon but that it was not clear who fired the shots. They also found a truck that had been burned.

The Rev. Warren Blakney Sr., president of the Tulsa NAACP, said the arrests came as a relief. Black community leaders met Friday night as fears mounted over the shootings — and the possibility of retaliatory attacks.

"The community once again can go about its business without fear of there being a shooter on the streets," Blakney said.

The shootings come at a fraught moment for black Americans. In late February, an unarmed black teen, Trayvon Martin, was fatally shot by a neighborhood watch volunteer in Sanford, Fla., raising questions about racial profiling and touching off protests across the nation.

While Tulsa police were reluctant to describe the shootings there as racially motivated, City Councilman Jack Henderson was not.

"Being an NAACP president for seven years, I think that somebody that committed these crimes (was) very upset with black people," Henderson said. "That person happened to be a white person, the people they happened to kill and shoot are black people. That fits the bill for me."