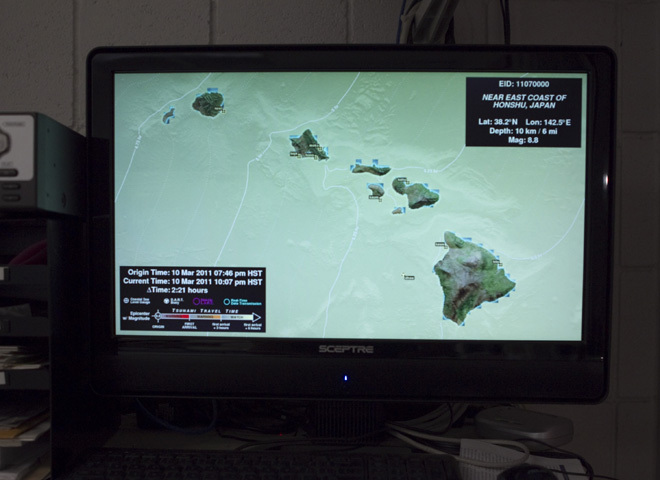 HONOLULU - Tsunami waves swamped Hawaii beaches before dawn Friday but didn't cause any major damage after devastating Japan and sparking evacuations as far away as the U.S. western coast.

Kauai was the first of the Hawaiian islands hit by the tsunami, which was caused by an earthquake in Japan, the Pacific Tsunami Warning Center said. Water rushed ashore in Honolulu, swamping the beach in Waikiki and surging over a break wall in the world-famous resort but stopping short of the area's high-rise hotels.

Waves about 7 feet high were recorded on Maui, and 3 feet in Oahu and Kauai. Officials warned that the waves would continue and could become larger, and a scientist at the tsunami warning center said there was likely damage to mooring facilities and piers.

"We called this right. This evacuation was necessary," said geophysicist Gerard Fryer in Hawaii. "There's absolutely no question, this was the right thing to do."

At Pearl Harbor half-meter wave heights were reported "without incident," according to CBS affiliate KGMB. No damage to piers was reported.

Roadways and beaches were empty as the tsunami struck the state, which had hours to prepare. Sirens sounded throughout the night, and residents in coastal areas were sent to refuge areas at community centers and schools while tourists were moved to higher floors of hotels. People waited in long lines stocking up on gas, bottled water, canned food and generators.

"I've been up all night and I'm supposed to go to work today. I'm waiting to see if I'll be working and if I can get to work," said Sabrina Skiles, who spent the night at her husband's office in downtown Kahului in Maui. Their home, across the street from the beach, was in a mandatory evacuation zone. "They're saying the worst is over right now but we keep hearing reports saying 'don't go anywhere. You don't want to go too soon,'" Skiles said.

The tsunami, spawned by an 8.9-magnitude earthquake in Japan, slammed the eastern coast of Japan, sweeping away boats, cars, homes and people as widespread fires burned out of control. It raced across the Pacific at 500 mph - as fast as a jetliner - though the waves roll into shore at normal speeds.

Waves are predicted to hit the western coast of the United States between 11 a.m. and 11:30 a.m. EST Friday. Evacuations were ordered in parts of Washington and Oregon, and fishermen in Crescent City, Calif., fired up their crab boats and left the harbor to ride out an expected swell. A tsunami in 1964 killed 11 people in Crescent City.

President Barack Obama said the Federal Emergency Management Agency is ready to come to the aid of Hawaii and West Coast states as needed. Coast Guard cutter and aircraft crews were positioning themselves to be ready to conduct response and survey missions as soon as conditions allow.

Scientists warned that the first tsunami waves are not always the strongest. The threat can last for several hours and people should watch out for strong currents.

It was the second time in a little over a year that Hawaii and the U.S. West coast faced the threat of a massive tsunami. A magnitude-8.8 earthquake in Chile spawned warnings on Feb. 27, 2010, but the waves were much smaller than predicted and almost no damage was reported.

Scientists acknowledged they overstated the threat but defended their actions, saying they took the proper steps and learned the lessons of the 2004 Indonesian tsunami that killed thousands of people who didn't get enough warning.

Many islands in the Pacific evacuated after the warnings were issued, but officials told residents to go home because the waves weren't as bad as expected.

In Guam, the waves broke two U.S. Navy submarines from their moorings, but tug boats corralled the subs and brought them back to their pier. No damage was reported to Navy ships in Hawaii.

But the size of Hawaii's islands is expected to amplify the waves, which will crash hardest against harbors and inlets.

The warnings issued by the Hawaii-based Pacific Tsunami Warning Center cover an area stretching the entire western coast of the United States and Canada from the Mexican border to Chignik Bay in Alaska.

In the Canadian pacific coast province of British Columbia, authorities evacuated marinas, beaches and other areas.

In Alaska, a dozen small communities along the Aleutian Island chain were on alert, but there were no reports of damage from a wave just over 5 feet.

Officials in two coastal Washington counties used an automated phone alert system, phoning residents on the coast and in low-lying areas and asking them to move to higher ground.

"We certainly don't want to cry wolf," said Sheriff Scott Johnson of Washington's Pacific County. "We just have to hope we're doing the right thing based on our information. We don't want to be wrong and have people hurt or killed.

In Oregon, sirens blasted in some coastal communities and at least one hotel was evacuated in the northern part of the state. Restaurants, gift shops and other beachfront business stayed shuttered, and schools up and down the coast were closed.

Latin American governments ordered islanders and coastal residents to head for higher ground. First affected would be Chile's Easter Island, in the remote South Pacific, about 2,175 miles west of the capital of Santiago, where people planned to evacuate the only town. Ecuador's President Rafael Correa declared a state of emergency and ordered people on the Galapagos Islands and the coast of the mainland to seek higher ground.

The tsunami warning was issued Friday at 3:31 a.m. EST. Sirens were sounded about 30 minutes later in Honolulu alerting people in coastal areas to evacuate. About 70 percent of Hawaii's 1.4 million population resides in Honolulu, and as many as 100,000 tourists are in the city on any given day.

On Friday, the Honolulu International Airport remained open but seven or eight jets bound for Hawaii have turned around, including some originating from Japan, the state Department of Transportation said. All harbors are closed and vessels were ordered to leave the harbor.

Honolulu's Department of Emergency Management has created refuge areas at community centers and schools, and authorities on Kauai island have opened 11 schools to serve as shelters for those who have left tsunami inundation zones.

A small 4.5-magnitude earthquake struck the Big Island just before 5 a.m. EST, but there were no reports of damages and the quakes weren't likely related, a geophysicist with the United States Geological Survey said.

Dennis Fujimoto said early Friday that the mood is calm but concerned on the island of Kauai while people readying for the tsunami.

Long lines formed at gas stations and people went to Wal-Mart to stock up on supplies.

"You got people walking out of there with wagonloads of water," he said.

The worst big wave to strike the U.S. was a 1946 tsunami caused by a magnitude of 8.1 earthquake near Unimak Islands, Alaska, that killed 165 people, mostly in Hawaii. In 1960, a magnitude 9.5 earthquake in southern Chile caused a tsunami that killed at least 1,716 people, including 61 people in Hilo. It also destroyed most of that city's downtown. On the U.S. mainland, a 1964 tsunami from a 9.2 magnitude earthquake in Prince William Sound, Alaska, struck Washington State, Oregon and California. It killed 128 people, including 11 in Crescent City, Calif.

Honolulu International Airport remained open but seven or eight jets bound for Hawaii have turned around, including some originating from Japan, the state Department of Transportation said. Airline operations personnel are "closely monitoring" the tsunami situation and "meeting constantly" to determine whether flights should be canceled.

All major airports in Hawaii - Lihue on Kauai, Honolulu, Kahului on Maui, and Kona and Hilo on the Big Island - are at sea level and in most cases right on the ocean. So this is a situation that all airlines are watching very closely. Twelve international flights coming into Hawaii were canceled, and several inter-island flights have been canceled as well.

Chip McCreary, the center's director, said tsunami waves have the potential to swamp coastal areas of all Hawaii's islands.

"What these waves look like is an elevation of sea level, where the sea level will rise above its normal level and stay high for 10 or 15 minutes before it starts to recede," he said. "As a result of this, in a tsunami wave, that water can flood the coast line and be a hazard to people and buildings on the coast."

"We're preparing for the worst and we're praying for the best," said John Cummings III, spokesman for the Honolulu Department of Emergency Management.

The tsunami warning follows a 4.5-magnitude earthquake has struck Hawaii. There were no immediate reports of injuries or damage from the quake that hit the Big Island about 30 miles southeast of Hilo just before 11 p.m. Thursday (4:00 a.m. ET).

A geophysicist with the U.S. Geological Survey says the earthquakes are likely not related. Hawaii has been hit by a string of small quakes related to volcanic activity.

"Everyone in that area knows, when you feel it, move -- don't wait for a siren," said John Madden, director of the Alaska Division of Homeland Security and Emergency Management. The largest affected town is Unalaska, population about 4,000.

She says counties hope to keep assessing new information as they decide what to do to keep people safe. While some counties have siren and loudspeaker systems, the spokeswoman says, "Nobody wants to set off sirens in the middle of the night" unnecessarily.

Russian authorities evacuated some 11,000 residents from coastal areas on Pacific islands before they were hit by tsunami waves unleashed by the quake off Japan's northeastern coast.

The regional emergency officials said that the waves reached several towns and villages on the Kurils, four Pacific islands that the Soviet Union seized from Japan in the final days of the World War II, but caused no damage. The islands lie as close as six miles from Japan's Hokkaido island.

A three-meter wave reached the village of Malokurilskoye and some other villages recorded lower water levels, the Russian Emergency Situations Ministry said. There were no immediate reports of damage.

Readings have come in from deep ocean gauges deployed since the 2004 tsunami in Banda Acha in Japan and around Wake Island.

In the Philippines, officials ordered an evacuation of coastal communities along the country's eastern seaboard in expectation of a tsunami following the 8.9-magnitude earthquake in Japan.

Disaster management officials in Albay province southeast of Manila say they ordered residents to move to designated evacuation sites that are at least 15 feet above sea level.

In Guam, authorities advised people to evacuate low areas of the U.S. territory and seek ground higher than 50 feet above sea level and 100 feet inland. The tsunami warnings for Guam and the Northern Mariana Islands were later lifted. But officials in Guam say public beaches will remain closed until they can be checked for damage after daybreak. Gov. Eddie Baza Calvo says all roads have been reopened.

A statement from Gov. Calvo's office says the Pacific Ocean island was "blessed'' that it was not affected by the tsunami, triggered by a massive earthquake in Japan.

In the Northern Marianas, boaters and beach-goers were warned to be cautious of strong currents.

The Northern Mariana Islands, another U.S. territory, was also under the warning, and the Hyatt Regency in Saipan has moved guests to three highest floors of the seven-story hotel.

Hotel spokesman Luis Villagomez said the hotel had received about three tsunami warnings in the last year but no serious damage.