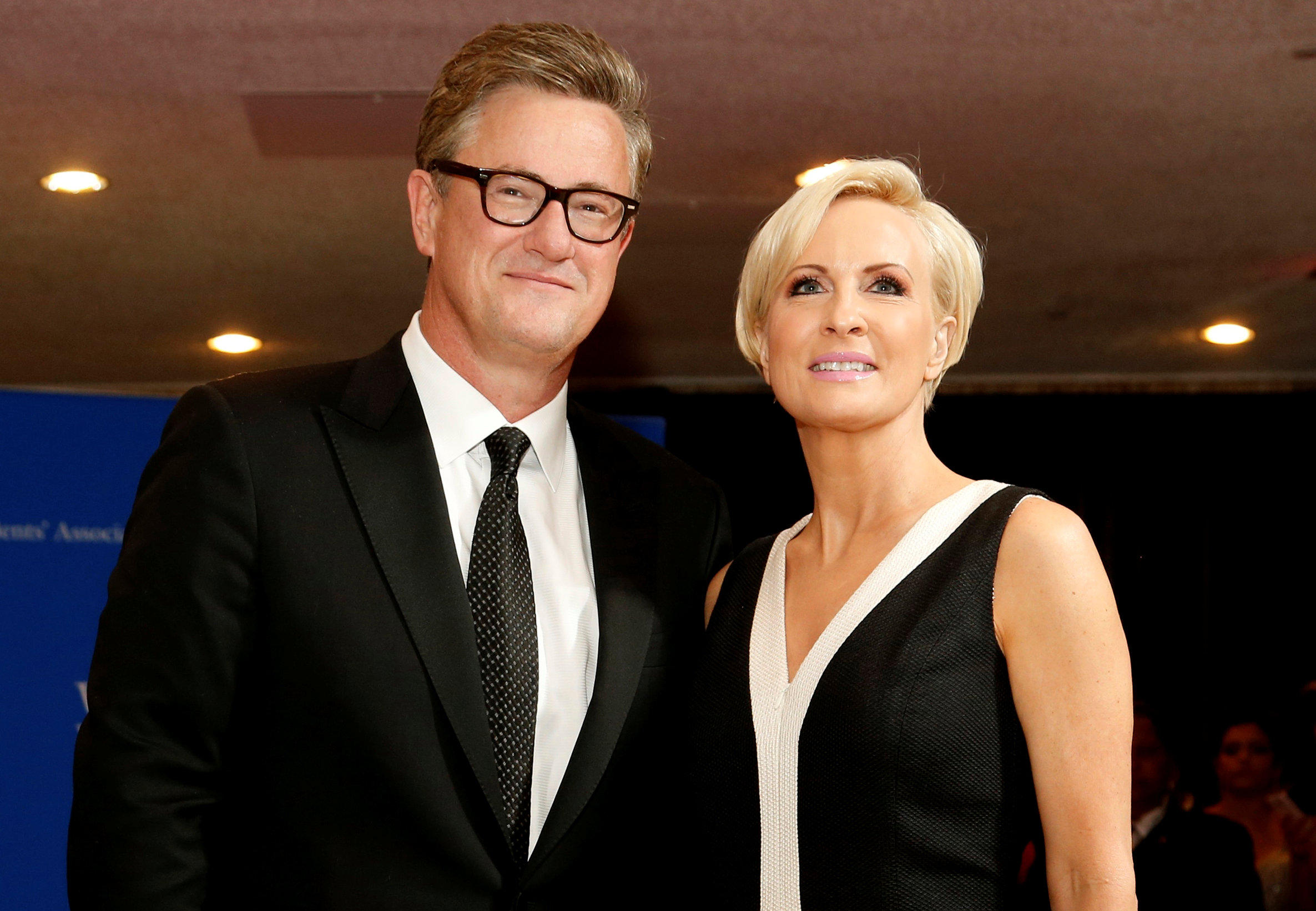 "We don't even know how to respond to this as a country. We don't know how to deal with this guy and we have friends inside the White House that have told us over the past month they're getting more concerned about his emotional state and also more concerned at the same time about what's happening across the world," Scarborough said on their MSNBC show, "Morning Joe."

"Talk about facelifts...whoa, Palm Beach," she said. Speaking of my face, while we're there, I had my chin tweaked -- the skin under my chin...I'm pretty transparent about what I do and I think it looks awesome."

Mr. Trump's tweets, aimed at Brzezinski and Scarborough, her "Morning Joe" co-host and fiancé, revived concerns about his views of women in a city where civility already is in short supply and he is struggling for any support he can get for his proposals on health care, immigration and other controversial issues.

"I heard poorly rated Morning Joe speaks badly of me (don't watch anymore)," Mr. Trump tweeted to his nearly 33 million followers Thursday morning. "Then how come low I.Q. Crazy Mika, along with Psycho Joe, came to Mar-a-Lago 3 nights in a row around New Year's Eve, and insisted on joining me. She was bleeding badly from a face-lift. I said no!"

In a Washington Post op-ed published Friday, the co-hosts wrote, "President Trump launched personal attacks against us Thursday, but our concerns about his unmoored behavior go far beyond the personal. America's leaders and allies are asking themselves yet again whether this man is fit to be president. We have our doubts, but we are both certain that the man is not mentally equipped to continue watching our show, 'Morning Joe."'

"The president's unhealthy obsession with our show has been in the public record for months, and we are seldom surprised by his posting nasty tweets about us. During the campaign, the Republican nominee called Mika 'neurotic' and promised to attack us personally after the campaign ended. This year, top White House staff members warned that the National Enquirer was planning to publish a negative article about us unless we begged the president to have the story spiked. We ignored their desperate pleas.

"The president's unhealthy obsession with 'Morning Joe' does not serve the best interests of either his mental state or the country he runs. Despite his constant claims that he no longer watches the show, the president's closest advisers tell us otherwise. That is unfortunate. We believe it would be better for America and the rest of the world if he would keep his 60-inch-plus flat-screen TV tuned to 'Fox & Friends."'

The tweets served to unite Democrats and Republicans for once in a chorus of protest that amounted to perhaps the loudest outcry since Mr. Trump took office.

Republican Sen. James Lankford, of Oklahoma, even linked the president's harsh words to the June 14 shootings of House Majority Whip Steve Scalise and three others.

"The president's tweets today don't help our political or national discourse and do not provide a positive role model for our national dialogue," Lankford said, noting that he had just chaired a hearing on the shootings.

Anchor Shepard Smith led his afternoon newscast with Mr. Trump's actions, which he said "some critics are calling sexist cyberbullying."

On Mr. Trump's level of insult-trading, Brzezinski responded on Twitter by posting a photograph of a Cheerios box that included the phrase "made for little hands." People looking to get under the president's skin have long suggested that his hands appear small for his frame.

Mr. Trump's allies cast his outburst as positive, an example of his refusal to be bullied.

White House spokeswoman Sarah Huckabee Sanders said the president was "pushing back against people who have attacked him day after day after day. Where is the outrage on that?"

"The American people elected a fighter; they didn't elect somebody to sit back and do nothing," she added.

First lady Melania Trump, who has vowed to fight cyberbullying while her husband is president, gave his tweets a pass.

"As the first lady has stated publicly in the past, when her husband gets attacked, he will punch back 10 times harder," her communications director, Stephanie Grisham, said in a statement.

As Mr. Trump welcomed South Korean President Moon Jae-in for a White House dinner Thursday evening, he didn't respond to shouted questions from reporters about whether he regretted the tweet.

Some of the administration's most high-profile women - daughter and presidential assistant Ivanka Mr. Trump, Counselor Kellyanne Conway and Deputy National Security Adviser Dina Powell - did not respond to requests for comment.

The White House has shown increasing irritation over harsh coverage of the president on "Morning Joe," including commentary questioning Mr. Trump's mental state.

About two hours before his tweets, Brzezinski said on the show that "it's not normal behavior" for any leader to be tweeting about people's appearances or to be bullying, lying, undermining managers and throwing people under the bus. She said that if any business executive behaved the way Mr. Trump does, "there would be concern that perhaps the person who runs the company is out of his mind."

On Wednesday, she had mocked Mr. Trump after a story in The Washington Post said he had posted fake Time magazine covers of himself in some of his golf resorts.

"Nothing makes a man feel better than making a fake cover of a magazine about himself, lying every day and destroying the country," Brzezinski said.

Mr. Trump, who has a habit of throwing up distractions to deflect bad news, has been straining to advance his agenda lately, with the Senate this week coming up short in finding enough votes to begin debate on a bill to roll back President Obama's health care law.

His demeaning broadside against a woman raised new complaints among critics who have long accused him of sexism and inflaming tensions in a deeply polarized nation. Mr. Trump also has consistently stoked a long-running feud with the press that has not hurt him with his base of roughly a third of the electorate.

But one expert rejected the idea that Mr. Trump's tweets about the MSNBC hosts amounted to a calculated push-back against the media.

"It's not a critique of the press. It's a diatribe. It's a rant," said Theodore L. Glasser, professor emeritus at Stanford University and an expert in mass media.

It wasn't the first time Mr. Trump has assailed a television personality who is a woman. In 2015, he went after then-Fox News Channel host Megyn Kelly when she questioned him at a debate. Mr. Trump said later that during the exchange, Kelly had "blood coming out of her wherever."

It's also far from the only time he's raised eyebrows with remarks about the physical attributes of women.

Just this week in the Oval Office, Mr. Trump interrupted his phone conversation with the new prime minister of Ireland to remark on a "beautiful" Irish journalist in the room and take note of the "nice smile on her face."

The latest flare-up did nothing to improve Mr. Trump's chances of advancing the health care bill that formed a centerpiece of his campaign.

"This has to stop - we all have a job - 3 branches of gov't and media," tweeted Republican Susan Collins of Maine, a critic of the Senate GOP bill. "We don't have to get along, but we must show respect and civility."

Tweeted Republican Sen. Ben Sasse of Nebraska, a frequent Mr. Trump critic: "Please just stop. This isn't normal and it's beneath the dignity of your office." Agreed South Carolina Republican Lindsey Graham: "Mr. President, your tweet was beneath the office and represents what is wrong with American politics, not the greatness of America."

Brzezinski and Scarborough have known Mr. Trump for years and interviewed him numerous times during the campaign. But they have been highly critical of Mr. Trump since he took office.

They did meet with Mr. Trump at his Florida estate on New Year's Eve for what they described as a brief visit, and also spent time with the president and senior staff at the White House in February. But Brzezinski supporters disputed Mr. Trump's characterization of the Mar-a-Lago meeting, saying it was the president who repeatedly asked the couple to visit him. Brzezinski and Scarborough were staying in the area for the holidays.

NBC News spokeswoman Lorie Acio said in a statement, "It's a sad day for America when the president spends his time bullying, lying and spewing petty personal attacks instead of doing his job."