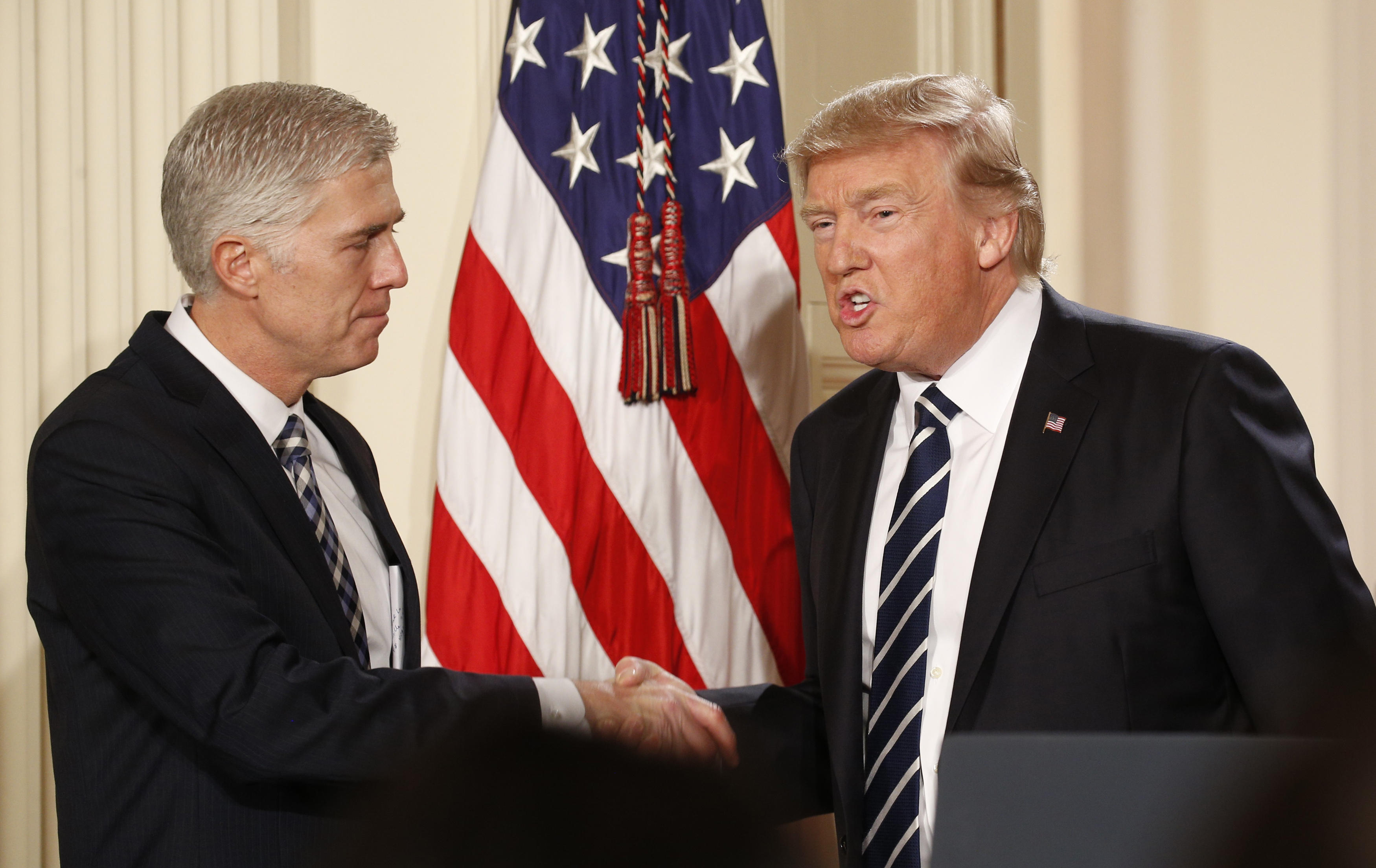 President Trump revealed the name of his first Supreme Court nominee at 8 p.m. ET in his first prime time address as president, announcing that Colorado-based Judge Neil Gorsuch was his pick.

The president’s choice came down to two men, CBS News’ Jan Crawford reported: Gorsuch and Thomas Hardiman of Pennsylvania. The two have very different backgrounds but are both considered solid conservatives. On Monday, Mr. Trump told reporters, “I think you will be very impressed with this person.”

Here is the blog -- with the most recent entries at the top:

11:47 p.m. Background on the selection of Gorsuch

At the White House Tuesday night, press secretary Sean Spicer shared with reporters some background on the selection of Neil Gorsuch to be the next justice.

On Jan. 14, Mr. Trump met with all three of his top candidates for the Supreme Court seat: Gorsuch, Thomas Hardiman and William Pryor. There were six finalists from Mr. Trump’s original list of 21, Spicer said, but the president only met with four. Just two days later, Mr. Trump telephoned Gorsuch and told him the nomination was his. White House counsel staff flew to Gorsuch’s home state of Colorado to prepare him for the coming weeks.

Before the announcement, Gorsuch was flown to Washington, D.C. on a military jet, and he stayed at a friend’s house.

Now that the announcement has been made, Gorsuch will immediately begin a round of meetings on Capitol Hill. Former New Hampshire Sen. Kelly Ayotte has been asked to be his sherpa for the process -- she will introduce him to members of the Sen. Judiciary Committee, beginning as soon as Wednesday.

While many Democrats are readying themselves for war on Gorsuch, he has already received a strong endorsement from one liberal -- Neal Katyal, who was solicitor general in the Obama administration. Writing in an opinion piece in the New York Times, Katyal praised Gorsuch  as “an extraordinary judge and man.”

“I have seen him up close and in action, both in court and on the Federal Appellate Rules Committee (where both of us serve),” Katyal wrote. “[H]e brings a sense of fairness and decency to the job, and a temperament that suits the nation’s highest court.”

Gorsuch, at 49 is the youngest Supreme Court nominee since Clarence Thomas was selected by George H.W. Bush in 1991 for the high court. So, if confirmed, he could play a role in determining the laws of the land for a generation or more -- perhaps not for as long as the 50 years Mr. Trump mentioned Tuesday -- but almost certainly 25 or even 30 years.

The Colorado judge also comes with some interesting ties to Washington. For one, he clerked for Justice Kennedy. A White House official noted that should Gorsuch be confirmed, it would be the first time in the court’s history that a justice and his former clerk served on the court together. The Harvard law graduate was also in the same class as former President Obama -- both graduated in 1991.

9:41 p.m. ET House Minority Leader Nancy Pelosi said at a town hall that Gorsuch is a “very hostile nominee.” She called the nominee “a very bad decision, well outside the mainstream of American legal thought,” according to CNN.

8:39 p.m. ET Senate Minority Leader Chuck Schumer called for an “exhaustive, robust, and comprehensive debate” on Gorsuch’s nomination, saying he has “very serious doubts” about Gorsuch’s willingness to stand up to Mr. Trump.

“The burden is on Judge Neil Gorsuch to prove himself to be within the legal mainstream and, in this new era, willing to vigorously defend the Constitution from abuses of the Executive branch and protect the constitutionally enshrined rights of all Americans,” he said in a statement. “Given his record, I have very serious doubts about Judge Gorsuch’s ability to meet this standard.”

“In the Hobby Lobby case, Judge Neil Gorsuch revealed his eagerness to single out women’s health for discrimination and enable employers to meddle in their workers’ most intimate health decisions,” she said.

Some Democrats immediately announced their opposition to Gorsuch: Sen. Sherrod Brown (D-Ohio) criticized the nominee for his past rulings on corporations and LGBT rights, to name a few.

“The people of Ohio deserve Supreme Court Justices who will defend the rights of working families over Wall Street and corporate special interests – and Judge Gorsuch’s record doesn’t pass that test,” Brown said in a statement.

8:30 p.m. ET Reactions are pouring in to Mr. Trump’s selection of Gorsuch for the Supreme Court vacancy -- and from Republicans, they are overwhelmingly positive.

“He has an impressive background and a long record of faithfully applying the law and the Constitution,” McConnell said.

“In Judge Neil Gorsuch, President Trump has fulfilled his pledge to nominate a judge who has a demonstrated loyalty to the Constitution and a strong commitment to life,” he said in a statement.

And Sen. Chuck Grassley (R-Iowa), who chairs the Senate Judiciary Committee, said in a statement that Gorsuch is respected by Democrats and Republicans alike.

“Judge Gorsuch is universally respected across the ideological spectrum as a mainstream judge who applies the law without regard to person or his own preferences,” he said.

8:16 p.m. ET When Gorsuch finished his remarks, the brief event -- clocking in at less than 20 minutes -- concluded.

8:14 p.m. ET Gorsuch said he is looking forward to speaking with “members from both sides of the aisle” in the Senate, and to “answering their questions and hearing their concerns.”

“I consider the United States Senate the greatest deliberative body in the world,” he said, adding that he believes “it is the role of judges to apply, not alter the work of the people’s representatives.”

“Justice Scalia was a lion of the law,” he said. “Agree or disagree with him, all of his colleagues on the bench cherished his wisdom and his humor and like them I miss him.”

“Judge Gorsuch has outstanding legal skills,” Mr. Trump said, who had earned bipartisan support when he was confirmed as a federal judge by voice vote in 2006. Mr. Trump said he had been confirmed “unanimously.”

“Can you believe that…does that happen anymore?” Mr. Trump asked, before implying he hoped Gorsuch could again attract support from Democrats.

Mr. Trump then praised Gorsuch’s resume, which include stints at Columbia University, Harvard Law, and Oxford University. “His academic credentials – something very important to me…are as good as I have ever seen,” Mr. Trump said.

Mr. Trump also introduced Maureen Scalia, the wife of the late Justice Antonin Scalia, whose death in 2016 opened up the vacancy Gorsuch will be filling.

8:05 p.m. ET Mr. Trump announced that he has selected Judge Neil Gorsuch for the Supreme Court vacancy, inviting Gorsuch and his wife up on stage.

“I am a man of my word, I will do as I say, something that the American people have been asking for from Washington for a very, very long time,” Mr. Trump said. “Today I am keeping another promise to the American people by nominating Judge Neil Gorsuch” for the Supreme Court.

“When Justice Scalia passed away suddenly last February, I made a promise to the American people if I were elected president, I would find the very best judge in the country for the Supreme Court,” he said. “I promised to select someone who respects our laws … and someone who will intepret them as written.”

7:52 p.m. ET With just a few minutes to go, prominent Republicans are in the East Room of the White House awaiting Mr. Trump and his nominee.

Mr. Trump’s two adult sons, Eric and Donald Jr., are also in the audience, according to CBS News’ Major Garrett.

7:40 p.m. ET Mr. Trump’s announcement Tuesday night will be almost a year after Justice Antonin Scalia’s death, which was on Feb. 13, 2016. And it is almost 11 months after President Obama named Judge Merrick Garland as his nominee for the vacancy, which was on March 16, 2016.

7:33 p.m. ET With just half an hour to go until Mr. Trump’s announcement, the president tweeted saying he’ll be announcing his “VERY IMPORTANT DECISION”:

President Trump is expected the reveal the name of his first Supreme Court nominee at 8 p.m. ET in his first prime time address as president.

CBS News’ Jan Crawford has reported that the president’s choice came down to two men -- Neil Gorsuch of Colorado and Thomas Hardiman of Pennsylvania, both of whom are expected to be on hand for tonight’s announcement. The two have very different backgrounds but are both considered solid conservatives. On Monday, Mr. Trump told reporters, “I think you will be very impressed with this person.”

With degrees from Harvard and Oxford and establishment credentials, Gorsuch has a judicial philosophy modeled after Antonin Scalia, the justice he would replace.

Hardiman is blue collar. He’s the first member of his family to graduate from college – Notre Dame, with honors – and he put himself through Georgetown Law driving a taxi. He would be the only justice from outside the Ivy League.

In either case, the president should be ready for a nomination fight. After Senate Republicans refused to give Obama’s pick, Merrick Garland, a hearing, Democrats have already promised to fight Mr. Trump’s nominee.

Follow along for live updates on the president’s announcement.