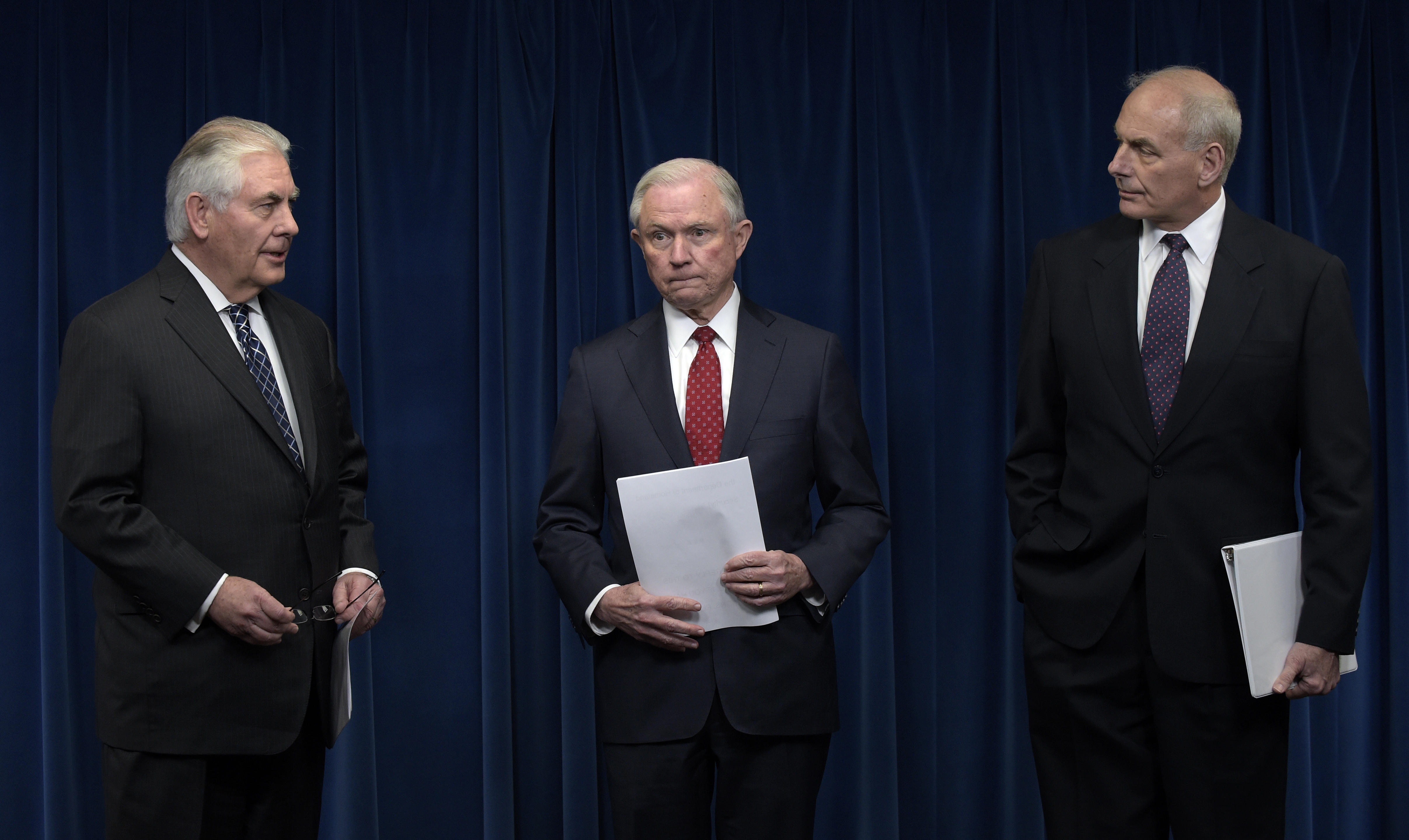 Homeland Security Secretary John Kelly, Secretary of State Rex Tillerson and Attorney General Jeff Sessions unveiled the new travel ban executive order Monday morning. There are a number of things that are different in this version of the travel ban.

Tillerson told reporters that after the signing of the first order, there was an intensive review of Iraq’s vetting policies, and as a result, the two countries would implement “multiple security measures” to help prevent people with “criminal or terroristic intent” from reaching the U.S.

Kelly pointed out that nothing in the new executive order affects “existing, lawful permanent residents or persons with current authorization to enter our homeland.”

Here are the highlights from Tillerson’s, Sessions’ and Kelly’s remarks.

Tillerson said the executive order signed by Mr. Trump is ”a vital measure for strengthening our national security.” With this order, Tillerson continued, the president is “exercising his rightful authority to keep our people safe.”

Common sense dictates that we continually reevaluate the systems we rely upon to protect our country, the secretary of state said.

“While no system can be completely infallible, the American people can have high confidence we are investigating ways to improve the vetting process and thus keep terrorists from entering our country,” said Tillerson.

Tillerson also directed his comments to U.S. allies and partners abroad, explaining that the order was meant to eliminate vulnerabilities “that radical Islamist terrorists can and will exploit for destructive ends.” State Department will coordinate with other agencies and implement these temporary restrictions in an orderly manner, Tillerson promised.

He informed reporters that the State Department would allow the admission of refugees when it’s determined they don’t pose a risk to “the security or welfare” of the U.S.

Iraq, which is not included in the list of banned countries in this version of the executive order, was subject to an intensive review after the first order was signed, Tillerson said.

“Iraq is an important ally in the fight to defeat ISIS,” he said. “With their brave soldiers fighting in close coordination with America’s men and women in uniform, this intense review over the past month identified multiple security measures that the State Department and the government of Iraq will be implementing to achieve our shared objective of preventing those with criminal or terroristic intent from reaching the United States.”

Attorney General Jeff Sessions alluded to a comment by the president that most of the people convicted in U.S. courts for terrorism-related offenses since 9/11 have come from abroad.

“[M]ore than 300 people who came here as refugees are under FBI investigation for potential terrorism-related activities,” Sessions said. He also said that those who are “seeking to support or commit terrorist attacks here will try to enter through our refugee program.”

The new executive order he said will provide a “needed pause,” so that the vetting process for those who come to the U.S. can be reviewed.

Sessions also argued that the Justice Department believes this order, like the first one, is “a lawful and proper exercise of presidential authority,” given the powers under the Constitution that allow the president to make national security judgments “and to enforce our immigration policies in order to safeguard the American public.”

DHS Secretary John Kelly said much has changed over the past 14 years, since the 9/11 attacks. Today’s order, he said, will make America more secure.

“The fact remains that we are not immune to terrorist threats and that our enemies often use our own freedoms and generosity against us,” Kelly said.

“This executive order is prospective in nature,” Kelly explained. “Its focus is to prevent entry of new foreign nationals from the six designated countries.”

He also pointed out that nothing in the new executive order affects “existing, lawful permanent residents or persons with current authorization to enter our homeland.”

The three took no questions after their brief statements.