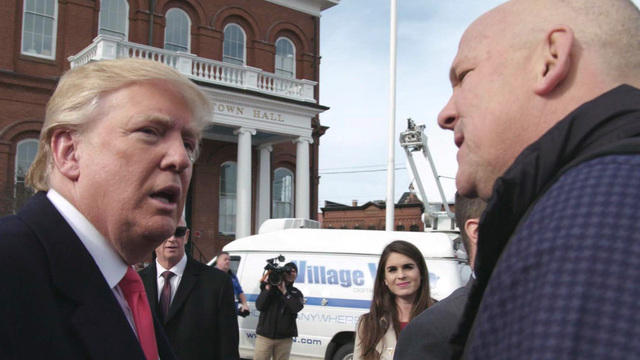 You may have found it almost impossible to unplug from the political frenzy during the election season. But Bloomberg Politics’ managing editor John Heilemann had an especially up-close look at the events leading up to President Trump’s stunning victory.

From January to November 2016, Heilemann – also the executive producer of Showtime’s political series, “The Circus” -- had daily access to the presidential candidates on the campaign trail. The never-before seen, behind-the-scenes footage is featured in a new documentary called, “Trumped: Inside the Greatest Political Upset of All Time.”

“Was there a moment that you could point to and say this was when it shifted in his favor?” co-host Charlie Rose asked on “CBS This Morning” Wednesday.

Heilemann said he asked that very same question to Clinton’s top advisers – John Podesta, Jennifer Palmieri and Robby Mook. They all pointed to Donald Trump’s attack on Senator John McCain for having been a prisoner of war.

“And not only did he not collapse, but his poll ratings went up,” Heilemann. “They all looked at it and said, ‘There’s some different physics that apply to this guy. He’s not mortal.’”

But according to Heilemann, that was just the beginning of many more obstacles that would’ve “killed any other candidate,” but only made Mr. Trump “stronger.”

“From the very beginning to the very end, there’s a sense that… he was sort of – certainly through the Republican nomination fight – unstoppable and he had lots of moments,” Heilemann said.

Mr. Trump’s run for president was met with skepticism since the beginning of his campaign, raising questions like whether he was being serious or even cared if he won. But according to Heilemann, the documentary exhibits that Mr. Trump had a strong “visceral desire for the office,” and was confident he’d win.

The Clinton campaign, however, was also confident. But Heilemann said the documentary captured a “poignant” moment at 3:45 in the morning on election day, when he interviewed Clinton campaign chairman John Podesta. The team had just returned to Westchester after one final campaign event.

“I ask him what it’d be like if you lose tomorrow. And he says, ‘It’ll be terrible and devastating… but I don’t think that’s going to happen.’ But when he says it, you see just a slight look in his eye of maybe, like he had just a little slight premonition… that he wasn’t fully confident,” Heilemann recalled. “And that was the one moment I saw anybody in the Clinton campaign betray any sense that they thought that she might lose.”

Many, from the Clinton campaign to Republicans – including Trump supporters – to major news networks and battleground polls, proved to be wrong that night. Heilemann said the historic night holds an important lesson for journalists.