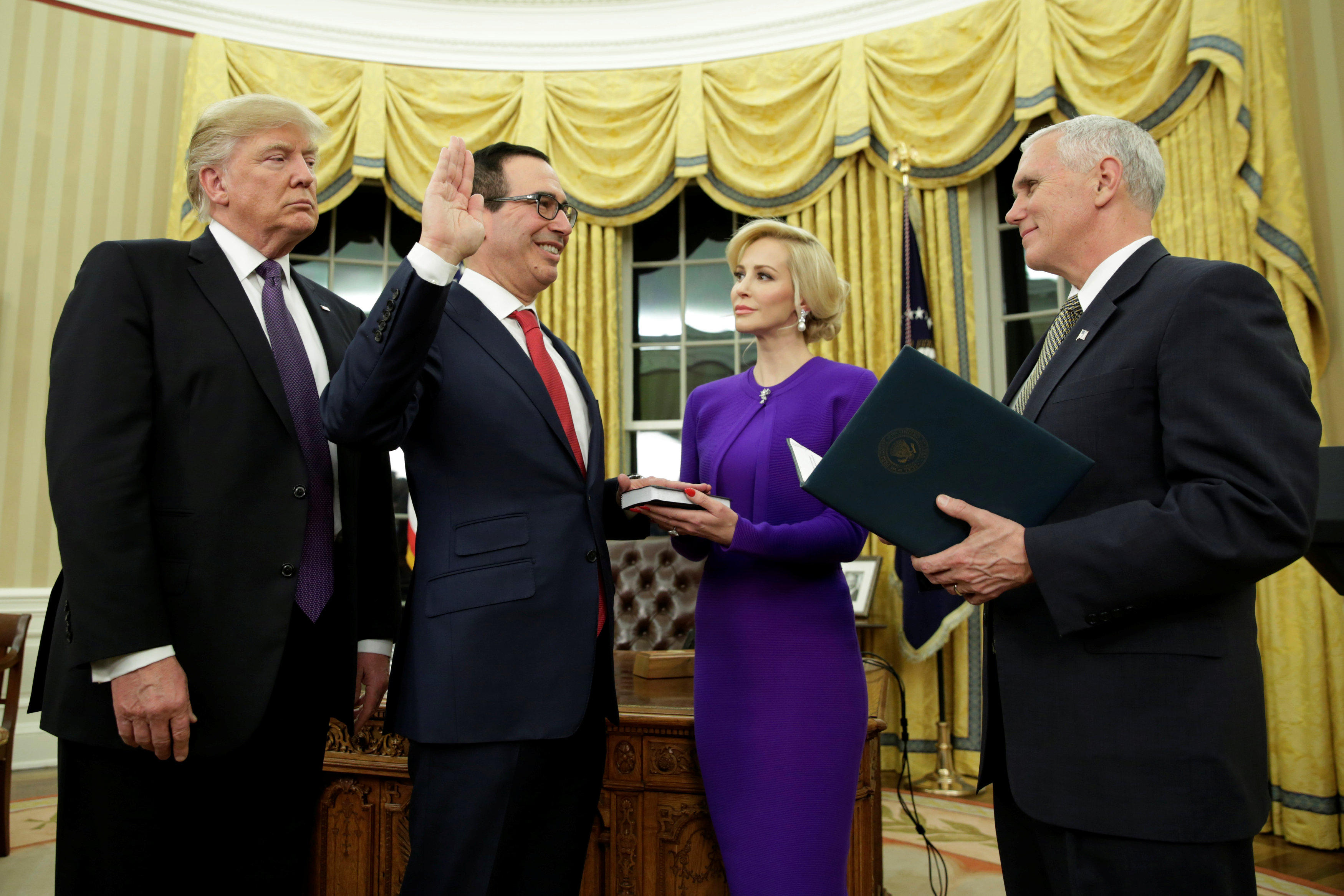 President Donald Trump said that Mnuchin spent his entire career making money in the private sector and now will go to work for the American taxpayer. Trump said Americans should know that “our nation’s financial system is truly in great hands.”

“He has experience managing large and complicated private-sector enterprises and in negotiating difficult compromises and making tough decisions - and being accountable for those decisions,” said Sen. Orrin Hatch, R-Utah, chairman of the Finance Committee.

The Senate also confirmed a less divisive nominee Monday evening, physician David Shulkin, to be secretary of the Department of Veterans Affairs. The vote was unanimous.

Votes on Trump’s Cabinet nominees have exposed deep partisan divisions in the Republican-controlled Senate, with many of the picks approved by mostly party-line votes.

The vote on Mnuchin was expected to follow the pattern. A separate vote on the president’s choice to lead the Department of Veterans Affairs, David Shulkin, was expected to be far less rancorous.

Like others chosen for Trump’s Cabinet, Mnuchin is a wealthy businessman. He is a former top executive at Goldman Sachs and served as finance chairman for Trump’s presidential campaign.

As Treasury secretary, Mnuchin is expected to play a key role in Republican efforts to overhaul the nation’s tax code for the first time in three decades. Trump has promised to unveil a proposal in the coming weeks.

Mnuchin will also be in charge of imposing economic sanctions on individuals and foreign governments, including Russia.

Democrats complained that Mnuchin ran a “foreclosure machine” when he headed OneWest Bank.

In 2009, Mnuchin assembled a group of investors to buy the failed IndyMac Bank, whose collapse the year before was the second-biggest bank failure of the financial crisis. He renamed it OneWest and turned it around, selling it for a handsome profit in 2014.

“Mr. Mnuchin has made his career profiting from the misfortunes of working people,” said Sen. Debbie Stabenow, D-Mich. “OneWest was notorious for taking an especially aggressive role in foreclosing on struggling homeowners.”

Sen. Sheldon Whitehouse, D-R.I., said: “I simply cannot forgive somebody who took a look at that banking crisis and took a look at the pain that Wall Street had sent in a wave across all of America, and thought, ‘Ah, there’s a great new way to make money, foreclosing on people.’”

Mnuchin has said he worked hard during the financial crisis to assist homeowners with refinancing so that they could remain in their homes. He said his bank extended more than 100,000 loan modifications to borrowers.

But several Democratic senators raised examples of residents in their states who they said were not treated fairly by OneWest, including elderly homeowners and members of the military.

Democrats also complained that Mnuchin failed to disclose nearly $100 million in assets on forms he filed with the Senate Finance Committee.

Mnuchin called his failure to disclose assets an oversight. After meeting with committee staff Mnuchin amended his disclosure forms and also disclosed his position as director of Dune Capital International in the Cayman Islands, a well-known offshore tax haven.

When pressed by Democrats to explain the omissions, Mnuchin said: “I did not use a Cayman Island entity in any way to avoid taxes for myself. There was no benefit to me.”

The Treasury Department is responsible for a wide range of activities, including advising the president on economic and financial issues. The department oversees the IRS, negotiates tax treaties with other countries, imposes economic sanctions against foreign governments and individuals, and targets the financial networks of terrorist groups and drug cartels.

The department also issues the bonds that finance the government’s deficit spending.

Republicans and Democrats praised Shulkin, who is charged with delivering on Trump’s campaign promises to fix long-standing problems at Veterans Affairs.

Shulkin, 57, a physician and former Obama administration official, has been the VA’s top health official since 2015. He secured the backing of Senate Democrats after pledging at his confirmation hearing to always protect veterans’ interests, even if it meant disagreeing at times with Trump.

He has ruled out fully privatizing the agency and says wide-scale firings of VA employees are unnecessary, describing the VA workforce as “the best in health care.”