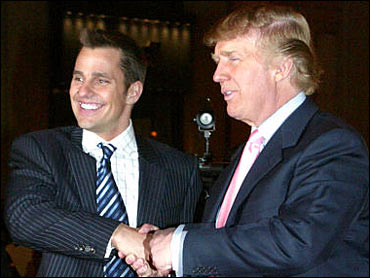 Kwame was fired. Bill got hired.

The reality TV show "The Apprentice" came to its much-anticipated climax Thursday when Donald Trump chose Bill Rancic, the street-smart 32-year-old Internet entrepreneur from Chicago, to be his apprentice for the next year.

Rancic edged out fellow finalist Kwame Jackson, the laid-back 29-year-old New Yorker and Harvard MBA, for the Trump-described "dream job of a lifetime" and its $250,000 salary.

"Kwame, I think you have an amazing future," said Trump in a live broadcast. "You're a brilliant guy, great education, and I have no doubt you're going to be a big success. But right now: Bill, you're hired."

Rancic will get to return home to Chicago to manage the construction of a hotel and residential tower as president of one of Trump's companies.

"Don't worry, you're going to have plenty of supervision of that building, I don't care if you're president or not," Trump told him. "I'll be the one supervising."

The decision closed out a two-hour showdown for the hit NBC reality competition that was avidly followed by millions of Americans. The tabloid New York Daily News put the story and a photo of the winner on its front page Friday with the headline: "He's Hired!"

On the series, billionaire developer Trump, the host, put 16 would-be apprentices through numerous business tasks - then, in the boardroom, "fired" someone at the end of each episode.

For his final assignment, Bill was put in charge of a Trump golf tournament, while Kwame handled an appearance by pop star Jessica Simpson at one of Trump's Atlantic City casino hotels.

The two "bosses" were each teamed with three "employees": previously fired "Apprentice" candidates who, possibly still nursing grudges, sometimes seemed as much a hindrance as a help.

Thanks to Bill's team, a vital sponsor's sign went missing.

Thanks to Omarosa on Kwame's team, Jessica Simpson went missing. Then she disappeared again, while Trump tapped his foot.

"Today is a great day for entrepreneurs around the country," the victorious Rancic said at a news conference after the broadcast.

"The American Dream is still alive out there, and hard work will get you there," he said. "You don't necessarily need to have an Ivy League education or to have millions of dollars startup money. It can be done with an idea, hard work and determination."

Asked when his job with Trump will begin, Rancic grinned and replied, "I believe I am on the clock, even as we speak."

When was an apprentice ever made the president of a company right away? And how can 15 people be fired when they were never hired in the first place? Those are questions that may never be answered.

But the boardroom summits with Trump, where he intoned "You're fired!" helped make "The Apprentice" a sensation since its January premiere.

Created by Mark Burnett, who brought "Survivor" to the airwaves, "The Apprentice" trades on a similar survival-of-the-fittest strategy.

Viewers have flocked for the bravura display of competitive greed and backstabbing. Another draw, perhaps: the eight female contestants were attractive and tended to wear short skirts.

"The Apprentice" has launched Trump into stratospheric new heights of fame. Not only has he dined out on the catch phrase "You're fired!" (and threatened to copyright it), he scored deals for a Trump-brand credit card and as a celebrity spokesman for a telecommunications company.

Two weeks ago he was guest host on "Saturday Night Live" and he has agreed to come back for a new edition of "The Apprentice" next season, reportedly at a substantial pay raise.

Meanwhile, the show has had several breakout characters, chief among them Omarosa Manigault-Stallworth, who is beautiful, scheming and cantankerous. Her feigned martyrdom from falling plaster on one episode earned her the ultimate pop-culture salute: She was spoofed on "Saturday Night Live."

Suspected hanky-panky between two other rivals, Nick Warnock and Amy Henry, has also added to the fun.

Whatever the reasons, "The Apprentice" has been a huge hit, last week ranking second in viewers, with 22 million - even edging out CBS' "Survivor: All-Stars." It ranks seventh for the season to date, according to Nielsen.