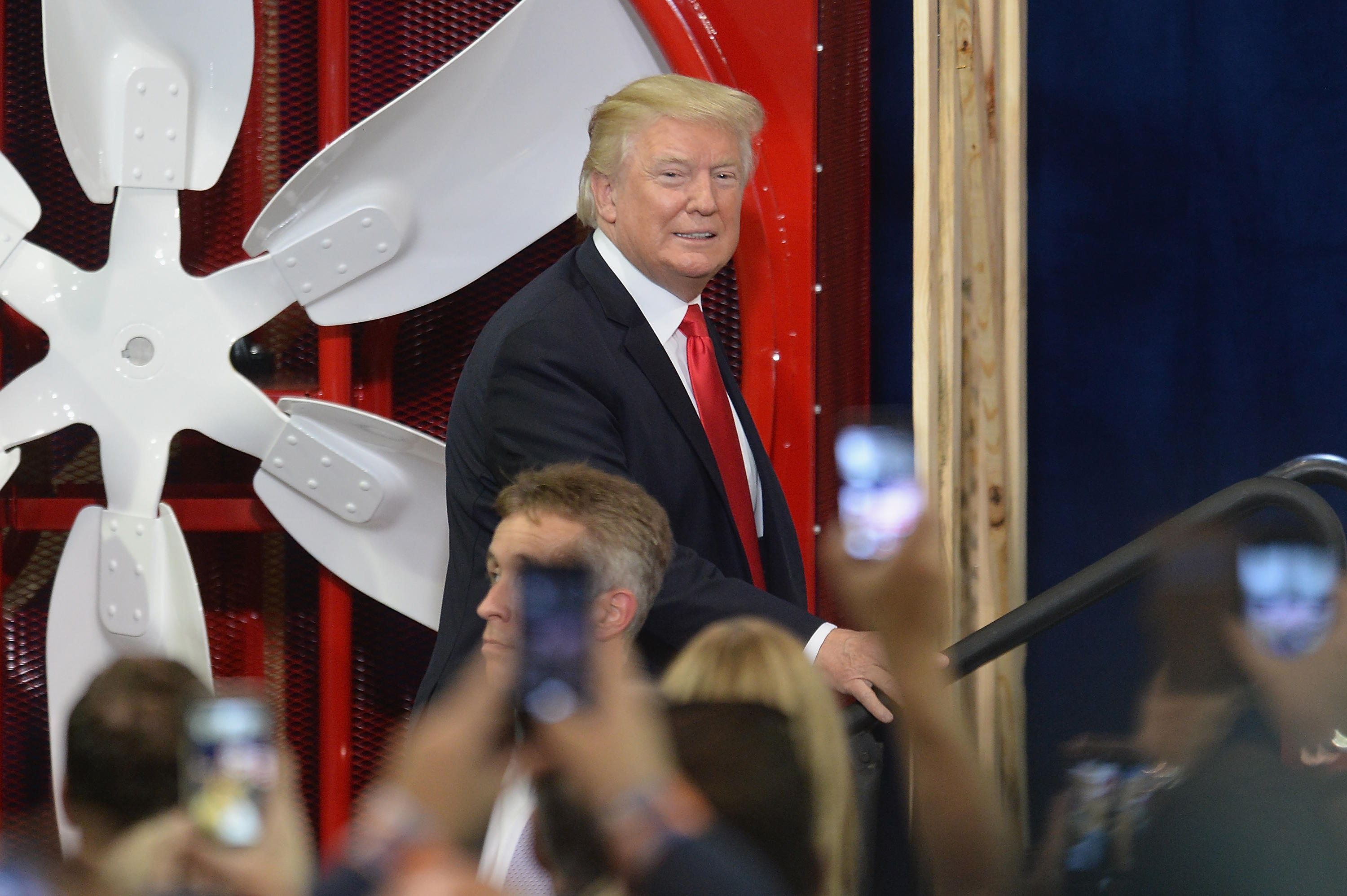 "Our tax system should benefit loyal hard-working Americans and their families," Mr. Trump said, promising to lighten the tax "burden."

The president vowed "to work with Congress, Republicans and Democrats alike" on the matter.

His remarks come as the debate over tax reform heats up among congressional leaders ahead of their return from the August recess. Simplifying the tax code has been one of Mr. Trump's goals since his days as a presidential candidate, and Congress is expected to make it a key focus of their upcoming agenda.

"I think Congress is going to make a comeback, I hope so," Mr. Trump said. "You know what? The United States is counting on it."

The White House plans to leave the details of the tax legislation to be worked out by House and Senate Republicans.

"So let's put or at least try to put the partisan posturing behind us and come together as Americans," Mr. Trump said.

While pledging to work on the tax overhaul in a bipartisan manner, the president directly called out Claire McCaskill, Missouri's Democratic senator.

"You have to vote her out of office," Mr. Trump told the audience, if McCaskill votes against his administration's tax goals. Moments later, he called congressional Democrats "obstructionists."

The president identified high business tax rates as the reason companies based in the United States choose to do business abroad.

"They leave the money over there," Mr. Trump said of large companies who operate internationally because of what he called "bureaucratic and difficult" tax regulations.

Mr. Trump expressed his hope that tax overhaul will "bring back trillions of dollars in wealth that's parked overseas," create a "pro-growth" job market and stimulate a "pro-American" economy.

Prior to his remarks, Mr. Trump tweeted Wednesday morning that tax cuts and reforms are "so badly needed!"

The speech took place at Loren Cook Company, which makes fans, blowers and laboratory exhaust systems. It's located in Springfield, the birthplace of Route 66, commonly referred to as "The Main Street of America."

Mr. Trump called on United States citizens and members of Congress to demand "nothing but the best for our nation and our people" and reasserted his belief that tax reform will improve both the lives of individual U.S. citizens and the economy as a whole before ending his speech.

"So let's put or at least try to put the partisan posturing behind us and come together as Americans," Mr. Trump said, adding that his model for tax overhaul will add "millions and millions" of new jobs, bring back "trillions of dollars" and give America a "competitive edge."

"Bring back trillions of dollars in wealth that's parked overseas"

"They leave the money over there," Mr. Trump said of large companies who choose to do business internationally because of what he called "bureaucratic and difficult" tax burdens.

He called his administration's tax goals "The American Model," which he said will encourage companies to build and hire in within the United States.

"We cannot restore our wealth if we continue to put our businesses at such a disadvantage," Mr. Trump said.

"You have to vote her out of office"

Mr. Trump said that if Sen. Claire McCaskill, D-Missouri, does not vote in favor of tax reform, Missouri residents must "vote her out of office."

He then called congressional Democrats "obstructionist."

"Our tax system should benefit loyal hard-working Americans and their families," Mr. Trump said before enumerating his administration's tax overhaul goals of:

"I don't want to be disappointed by Congress"

"I think Congress is going to make a comeback, I hope so," Mr. Trump said. "You know what? The United States is counting on it."

Trump vows to bring back the Main Street "American Spirit"

Mr. Trump said that Americans have "watched prosperity slip away" in recent years as a result of "tax burdens."

"We're going to change that around," Mr. Trump said.

He criticized the Obama administration for their failure to achieve a higher GDP and promised to "go much higher than 3 percent," which he claimed former president Barack Obama was unable to achieve during his time at the White House.

The birthplace of Main Street

"We're here today to launch our plans to bring back Main Street," Mr. Trump said, acknowledging Springfield, Missouri as the birthplace of the "legendary Route 66."

Mr. Trump promised "to work with Congress, Republicans and Democrats alike" on a tax overhaul that is "pro-growth" and "pro-American."

Trump acknowledges Harvey: "All of America is grieving with you"

Mr. Trump thanked first responders to Hurricane Harvey, a storm which he called "a devastating hurricane of historic proportion."

The president was on the ground in Texas Tuesday to view firsthand the damage Harvey has caused and assess the federal response to the natural disaster.

"Together, we will endure and we will overcome," Mr. Trump said, offering prayers to the victims of Harvey. "Recovery will be tough," he later added