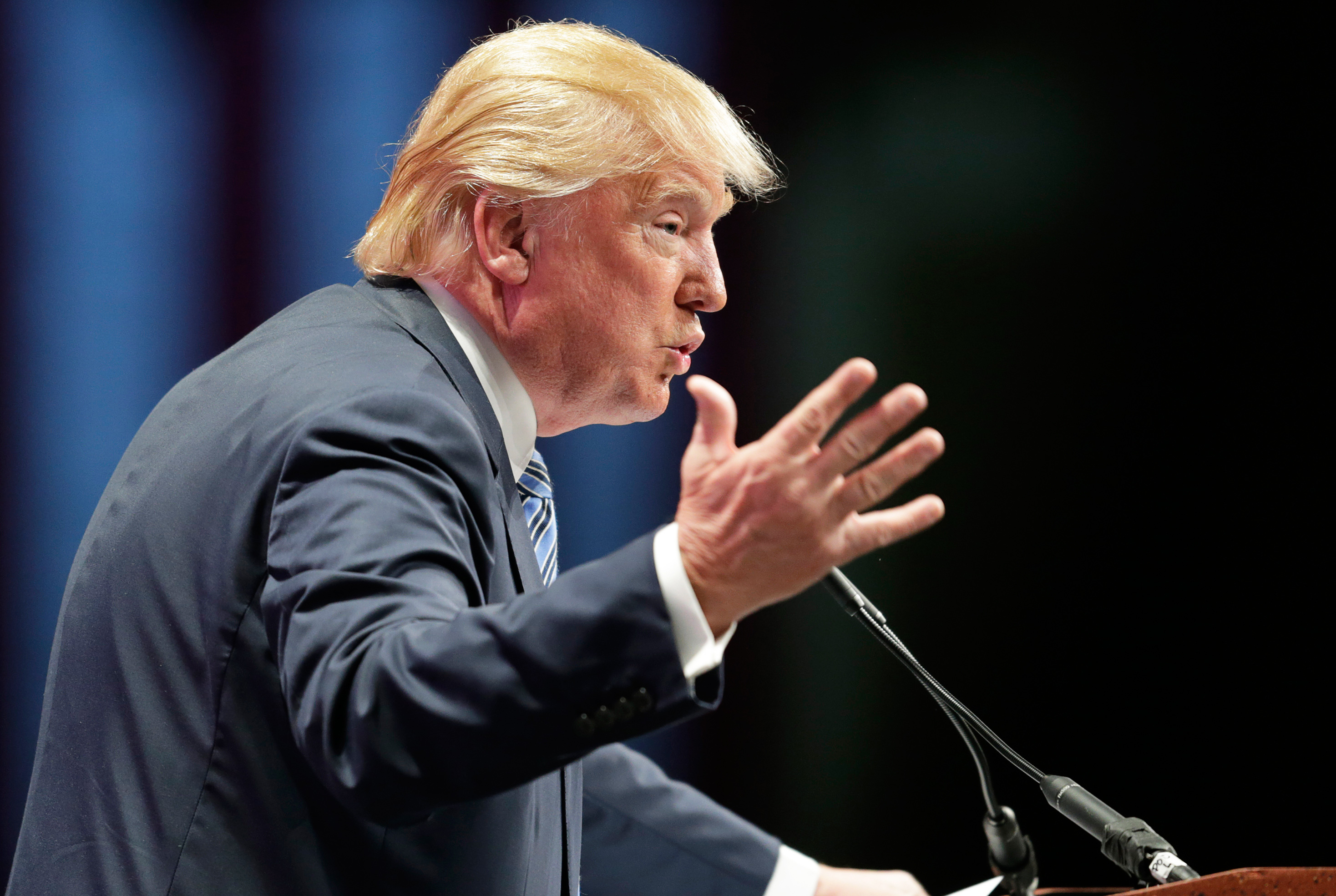 KNOXVILLE, Tennessee -- On his third trip here, an energized Donald Trump held forth before a crowd of at least 8,000 on the topic of Syrian migrants.

"So we have a president that wants to take hundreds of thousands -hundreds of thousands of people and move them into our country," Trump said, reviving a false attack. President Obama has in fact, ordered the State Department to make preparations to take in 10,000 Syrian refugees in the next fiscal year.

"And I've told people," Trump went on. "I've said to anybody that's listening: anybody that's brought into this country from the migration is going to be out. We're going to have a country again."

While it wasn't the first time that Trump has called for deportation of refugees already accepted into the U.S., it took on new meaning on Monday in the wake of last week's attacks in Paris, in which one of the attackers was carrying a Syrian passport, although it is not yet clear whether the passport was authentic.

"They seem like so many men," Trump said. "And they're so strong, - they're strong looking guys....Why aren't they back fighting for their country?"

Earlier in the day, Trump once again said that he was open to closing down certain mosques in the country for terrorism-related concerns.

"I would hate it to do it, but it's something that you're going to have to strongly consider because some of the ideas and some of the hatred, the absolute hatred, is coming from these areas," Trump said on MSNBC.

Trump's new spokesperson, Katrina Pierson also posted a message on Twitter, making this statement about followers of Islam,: "Islam preys on the weak and uses political correctness as cover. Two things that Americans won't be concerned with when @realDonaldTrump is in the White House."

Before Trump took the stage here in Knoxville, an Army veteran David Perry took the stage to lead the pledge of allegiance. But before he started, he told the crowd that one of his favorite things about Donald Trump was that he was going to send those Syrians back to where they came from.

"I'm gonna be the first volunteer to drive em' to the airport," Perry told a cheering crowd."

Trump's plan for migrants received mixed reactions from the boisterous crowd. 26-year-old Shehara Hapuarachy, an architect in Knoxville, is a first generation Sri-Lankan who is leaning towards voting for Florida Sen. Marco Rubio for the GOP nomination.

"I think that we need to have some safe havens for them here in the country, "Hapuarachy said. "If we can have some more regulations, and be able to do some background checks, that would help a lot. Right now, I don't really know we have the resources to do that and to fully check people as they're coming in. I'm not big on just sending everybody away. I think we need to help out as much as we can."

Denny Phillips, a 43-year-old executive in the food and beverage industry in Tennessee, also was open to accepting migrants, with strong enough vetting.

"As a Christian, we're taught that we're supposed to welcome visitors - welcome people from abroad, welcome foreigners to our land," Phillips said. "I think it's great they want to come here. We do have a bit of an issue though with just sort of mass influx. Europe really deals with it a lot more than we do here. We actually have kind of the ability to control who flows in.

Personally, would I welcome them in? I don't necessarily have an issue per se as long as they're well-vetted. I don't think we see that ability. If they can show me a hard path - what they actually did overseas, I would welcome you to our country."

While Trump singled out the president for criticism Monday, he chose not to mention Ben Carson, who has overtaken Trump in some polls. This was the first speech in at least a few weeks in which Trump omitted Carson, after a streak of critiques on issues ranging from Carson's use of a super PAC to the reliability of his telling of his life story.