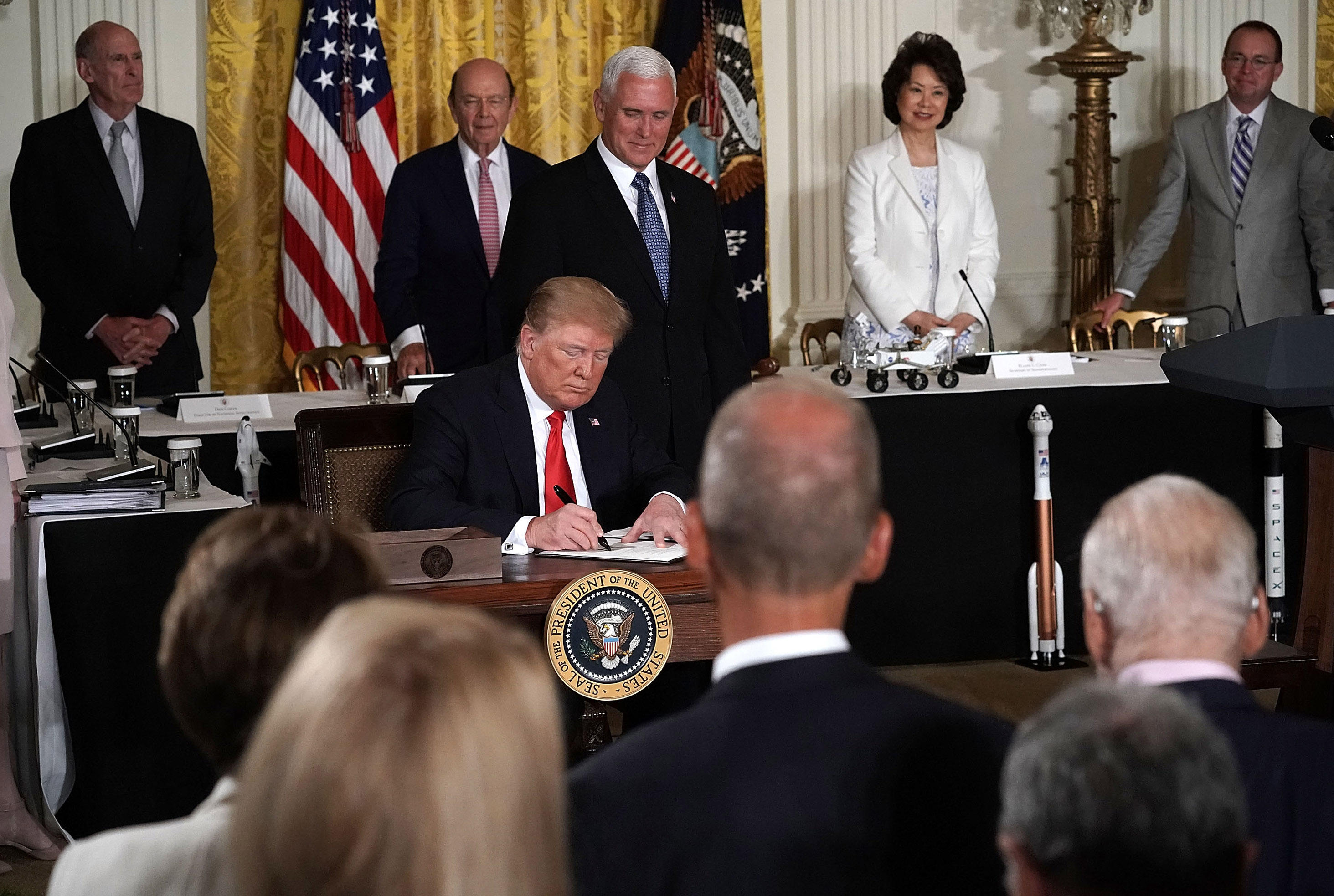 President Trump officially directed the Pentagon to establish a sixth branch of the U.S. military in space on Monday. Speaking at a National Space Council meeting at the White House, Mr. Trump called for a "space force" to ensure American dominance on the high frontier.

The president also signed his administration's third Space Policy Directive, calling for establishment of new protocols and procedures to manage and monitor the increasing numbers of satellites in low-Earth orbit and the tens of thousands of pieces of space junk and debris that pose an increasing threat to costly spacecraft.

The directive follows on the heels of two other major space policy initiatives being implemented by the National Space Council, one calling for returning humans to the moon before eventual missions to Mars and another aimed at streamlining the federal space bureaucracy to reduce red tape and streamline licensing and oversight of commercial space activity.

In remarks that ranged over a variety of unrelated topics, Mr. Trump began by saying current U.S. employment levels were the best "in recorded history" and blaming current immigration problems on the Democrats, saying "we have the worst immigration laws in the entire world" and that ongoing issues could be resolved "very quickly if the Democrats come to the table."

"Everybody wants to do it," he said. "We want to do it more than they do. If they come to the table, instead of playing politics, we can do it very, very quickly."

Turning his attention to space, the president praised the National Space Council and its chairman, Vice President Mike Pence, for its work re-focusing national space policy, saying "for too many years, our dreams of exploration and discovery were really squandered by politics and bureaucracy. And we knocked that out."

"My administration is reclaiming America's heritage as the world's greatest space-faring nation," he went on. "The essence of the American character is to explore new horizons and to tame new frontiers. But our destiny, beyond the Earth, is not only a matter of national identity, but a matter of national security."

He said when it comes to defending America, "it is not enough to merely have an American presence in space. We must have American dominance in space."

Turning to Marine Corps Gen. Joseph Dunford, chairman of the Joint Chiefs of Staff, Mr. Trump said "it is going to be something. So important. Gen. Dunford, if you would carry that assignment out, I would be very greatly honored. ... Got it?"

"We got it," Dunford replied.

Space is a critical element in U.S. military operations, providing satellite-based intelligence, secure communications, weather forecasting and weapons command and control. Protecting those space-based assets also is critical given the development of anti-satellite weapons by China and Russia.

The idea of a space force that would oversee those efforts as a stand-alone Pentagon entity has surfaced several times in the past, but the Pentagon has resisted such calls, leaving it to U.S. Air Force Space Command to oversee such efforts.

Mr. Trump provided no details and no timetable, but the establishment of a new branch of the military would be a major undertaking requiring extensive debate and congressional support.

"We understand the President's guidance. Our Policy Board will begin working on this issue, which has implications for intelligence operations for the Air Force, Army, Marines and Navy. Working with Congress, this will be a deliberate process with a great deal of input from multiple stakeholders."

In a letter to lawmakers last year, Defense Secretary James Mattis "strongly" urged Congress to reconsider a proposal to establish a separate "Space Corps," saying it was "premature" to set up a new organization "at a time I am trying to reduce overhead."

"The creation of an independent Space Corps, with the corresponding institutional growth and budget implications, does not address the specific concerns nor our nation's fiscal problems in a responsive manner," The Hill quoted Mattis.

Sen. Bill Nelson, a Florida Democrat who once flew aboard a space shuttle and who is running for re-election, was quick to object Monday, tweeting his take on Mr. Trump's remarks before the National Space Council meeting even ended.

"The president told a US general to create a new Space Force as 6th branch of military today, which generals tell me they don't want," he wrote. "Thankfully the president can't do it without Congress because now is NOT the time to rip the Air Force apart. Too many important missions at stake."

In any case, Mr. Trump signed Space Policy Directive 3 and then left the room, leaving Pence to manage the third public meeting of the National Space Council.

Wilbur Ross, the Secretary of Commerce, reported good progress reducing regulatory overhead and red tape in the commercial space market and Secretary of Transportation Elaine Chao said her department is making major changes to speed up licensing of commercial launches and landings to encourage private-sector development of low-Earth orbit, including space tourism.

Jim Bridenstine, NASA's new administrator, told the council the civilian space agency is working to implement Space Policy Directive 1, which calls for astronauts to return to the moon as the nation's next major space objective.

NASA is developing concepts for an orbital "gateway" space station circling the moon that would serve as a base of operations, a technology testbed and a jumping off point for future flights into deep space.

"The goal is sustainability," Bridenstine said. "We do not want this to be 'Lucy and the football' again. When we go to the moon, we're going, as the president said in his speech, this time we're going to stay. The gateway gives us that great opportunity.

"It's also important to note that as NASA develops these capabilities, each one of these capabilities feeds forward. The reason we go to the moon is we want to land Americans on the surface of Mars. The technologies, the capabilities, the in situ resource utilization that we develop for the moon will ultimately get us to Mars."

The council then heard from two panels of experts who all agreed with the current plan to send astronauts back to the moon as the immediate goal of America's human space program. But Terry Virts, a veteran shuttle astronaut and space station crew member, argued against building a gateway similar in concept to NASA's current space station.

"It essentially calls for building another orbital space station, a skill my colleagues and I have already demonstrated on the ISS," Virts said. "Gateway will only slow us down, taking time and precious dollars away from the goal of returning to the lunar surface and eventually flying to Mars."

"Most importantly," he added, "any future exploration plan must be bipartisan. Unless these efforts are truly bipartisan, from the beginning, they will be doomed to eventual cancellation. You see, getting back to the moon and eventually to Mars does not depend on rocket science. It depends on political science."