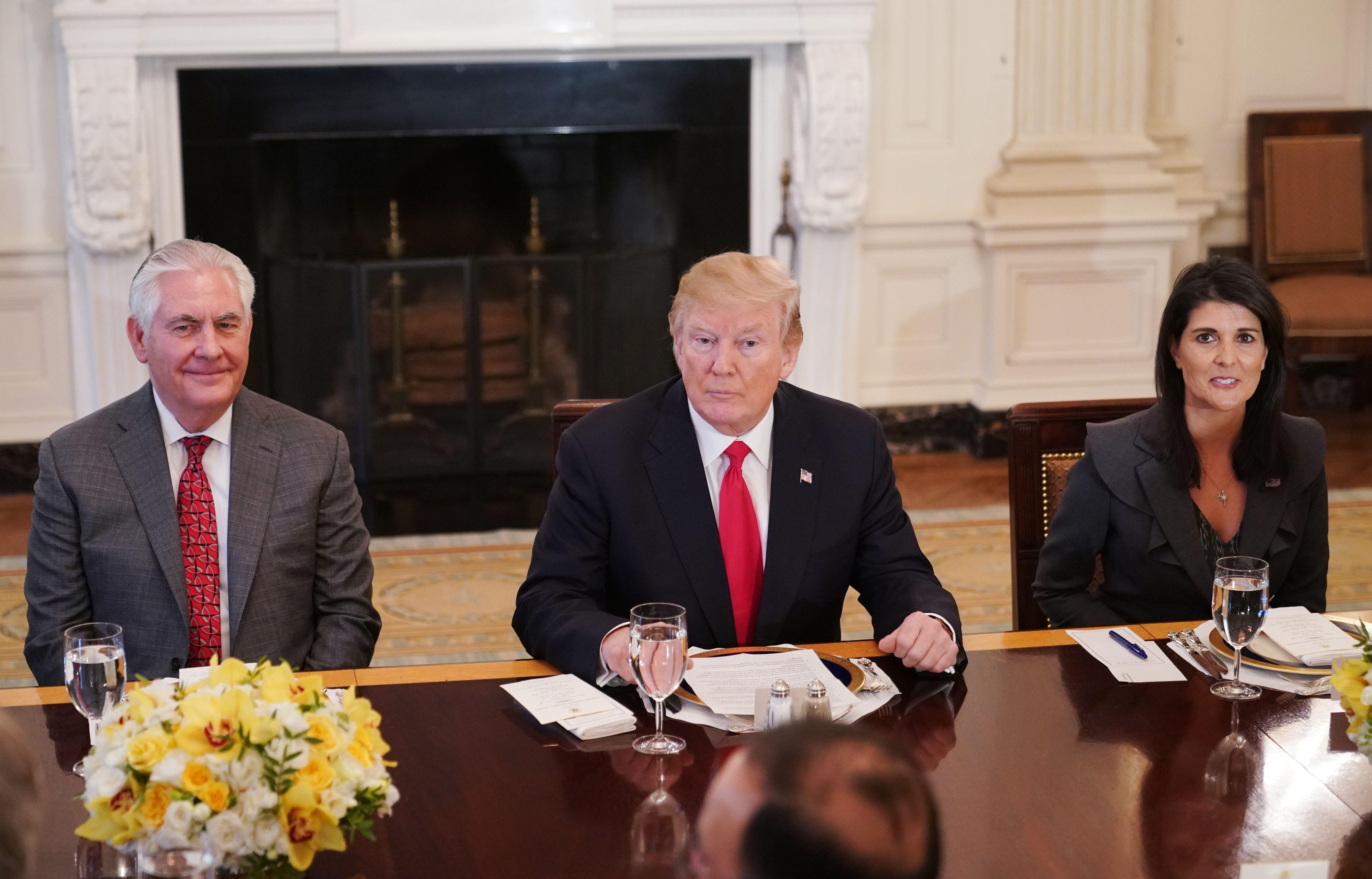 President Trump hosted a lunch at the White House on Monday with the United Nations Security Council. U.S. Ambassador to the U.N. Nikki Haley and Secretary of State Rex Tillerson were both in attendance and flanked the president as he delivered remarks to reporters before the lunch.

The president said the group would be discussing the administration's cooperation on a "range of security challenges including the de-nuking of North Korea very importantly, countering Iran's destabilizing activities in the Middle East, ending the Syrian conflict and confronting terrorism."

Mr. Trump said he was "proud" to work with the UNSC, saying "we've already done a tremendous number of coalition buildings" adding that the U.S. is "leading on the global stage to renew this founding principle of sovereignty."

He added of the international body, "the power and respect it has all over the world is very, very excellent, but there's much work that we have to together do."

The meeting with Haley and Tillerson came on the eve of Mr. Trump's first State of the Union address, which will include foreign policy issues.

According to a senior administration official who previewed the speech in a background call to reporters, the president will emphasize rebuilding the military, and promoting peace through strength. He will also discuss a return to clarity in who America's friends and adversaries are.

The president told reporters during the lunch that the group would also be discussing efforts in defeating the Taliban in Afghanistan saying "I don't think we're prepared to talk right now" with regard to the terrorist group, calling it a "whole different fight over there."

"We don't want to talk with the Taliban, there may be a time but it's going to be a long time," he added.

The huddle also came one week before the Winter Olympic Games are set to take place in Pyeongchang, which has become the backdrop for renewed talks between the North and South Koreans. Vice President Mike Pence will be leading the U.S. delegation to the winter games.

The two Koreas have been pressing ahead with a flurry of projects to cooperate in the Feb. 9-25 Olympics in Pyeongchang since North Korean leader Kim Jong Un abruptly said in a New Year's speech that he was willing to send a delegation to the games.

The delegations have since agreed during talks that athletes from the two Koreas will march together under a "unification flag" depicting their peninsula during the opening ceremony and will field a single women's ice hockey team.

Mr. Trump has since said he is now willing to consider diplomatic talks with North Korea, though he has also said in the past that such talks would be a waste of time.

Haley said that besides the White House meeting, the council visited the Holocaust Museum and saw "first-hand evidence from the Department of Defense of Iran's illegal weapons program." She tweeted photos of the council's trip, saying "these violations cannot continue."

Although the Council had met with the president last April, the composition of the elected members of the Council has changed, CBS News' Pamela Falk reports from the U.N., and the trip gives Haley and the U.S. time and access to smooth diplomatic differences, including with Russia's U.N. Ambassador Vasily Nebenzia.

After the April trip, in which several Council members, from countries who are allies and adversaries, took pictures with the president, Haley's proposals at the Council have met with more openness, a Council member on the trip told CBS News, because it illustrated her direct access to the White House, Falk reports.

Not every country was thrilled with Haley's courting of the Council: Iran's response was swift and its Foreign Minister Javad Zarif tweeted that the Council was given the "Iranophobic narrative."

Commenting on whether or not the Council was convinced by the evidence on Iran that they saw this morning, U.K. Acting Ambassador Jonathan Allen tweeted, "We have an independent expert UN panel. But as a non-expert I understand that it's more than just factory stamps. Missile shape unique (no tail fins; valve positions) as is anti-tank missile design. Hard to see how they are "tampered with" if that's the accusation."