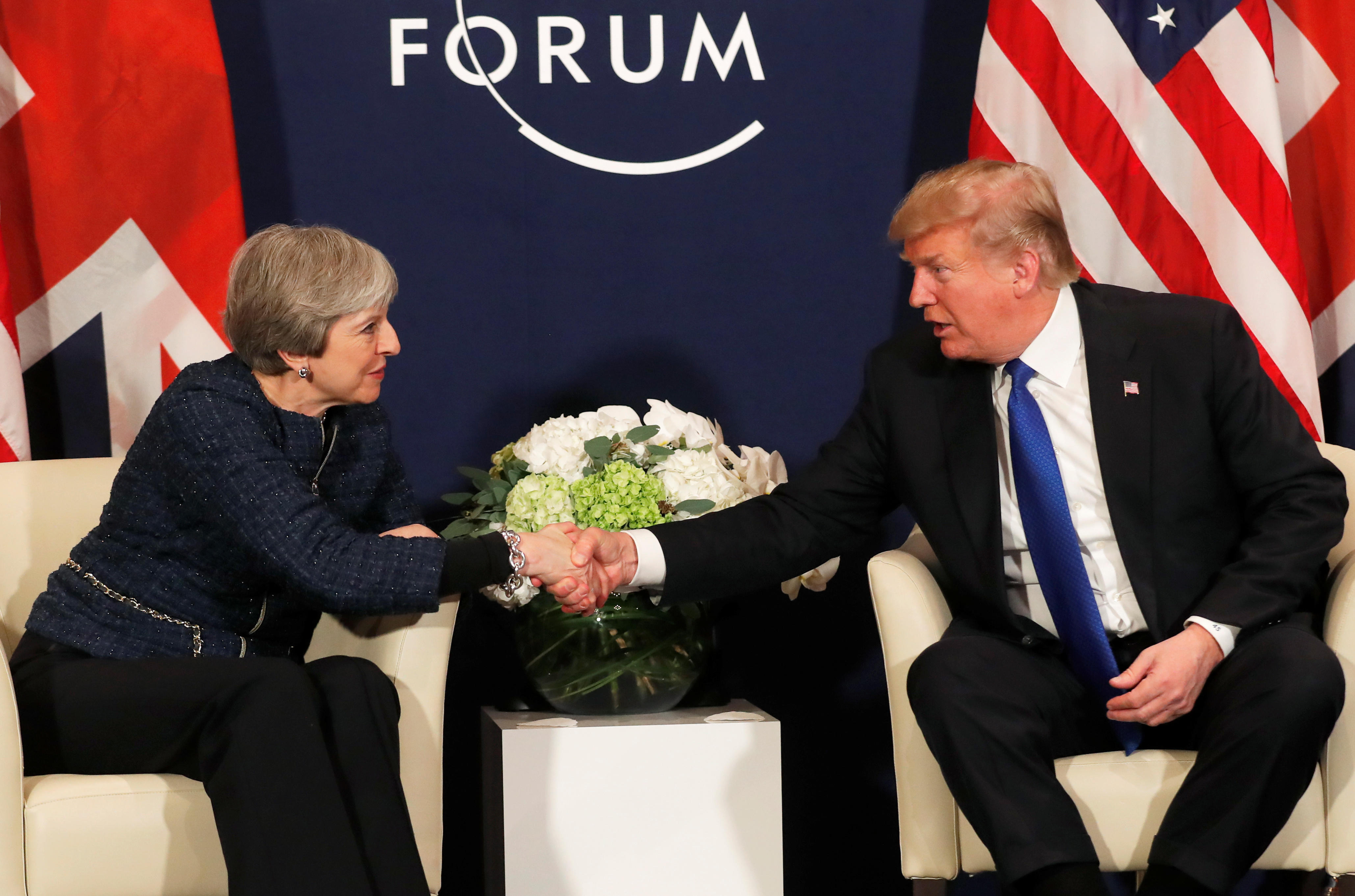 President Trump kicked off his first official day in Davos, Switzerland by holding a bilateral meeting with one of the closest allies to the United States -- the United Kingdom's Prime Minister Theresa May where he said he wanted to clarify reports surrounding his working relationship with the UK's political leader.

At the meeting on the sidelines of the World Economic Forum Thursday morning, Mr. Trump said that the two countries to "like each other, a lot," adding that the "feeling is mutual" between the two.

"We love your country we think it's truly great," said the president. He added that the two were "joined at the hip when it comes to military, same idea, ideals."

May echoed Mr. Trump's sentiments, saying the U.S. and UK "continue to have that really special relationship" as they work together to address issues on trade and the global economy.

This was the first time Mr. Trump and May came face-to-face since cancelling a working visit to London to officially open the new U.S. embassy. The president decided not to attend because he said he doesn't like the building, and thinks his predecessor was wrong to "sell" the old one.

Secretary of State Rex Tillerson went in the president's place earlier this month.

The two were also at odds in the fall when the president seemingly endorsed a far-right UK political party "Britain First" by retweeting videos, some with violent imagery, tweeted out by the party's leader.

At the time, May's spokesperson criticized Mr. Trump for giving "Britain first" such a big platform and said the group "seeks to divide communities by their use of hateful narratives that peddle lies and stoke tensions."

Mr. Trump tweeted a response to May, advising her not to "focus on me" but instead "focus on the destructive Radical Islamic Terrorism that is taking place within the United Kingdom."  He added, "We are doing just fine."

The president said on Thursday he wanted to correct a "false rumor" of any remaining rifts between the two leaders.

The live television coverage of the bilateral meeting ended with reporters throwing questions at Mr. Trump about the still-lingering prospect of an official State Visit to Britain.

The president replied curtly that he and May would be "discussing it", without any additional detail. As the BBC live coverage returned to anchor Simon McCoy in the studio, he summed up the meeting with trademark British sarcasm: "Well, that was comfortable."

Mr. Trump arrived in Davos and the World Economic Forum Thursday, hours after an impromptu press conference with reporters in which he said he is looking forward to being interviewed by special counsel Robert Mueller, and is open to a pathway to citizenship for Dreamers.

The president is also set to meet with Israeli Prime Minister Benjamin Netanyahu on the sidelines of the forum on Thursday.