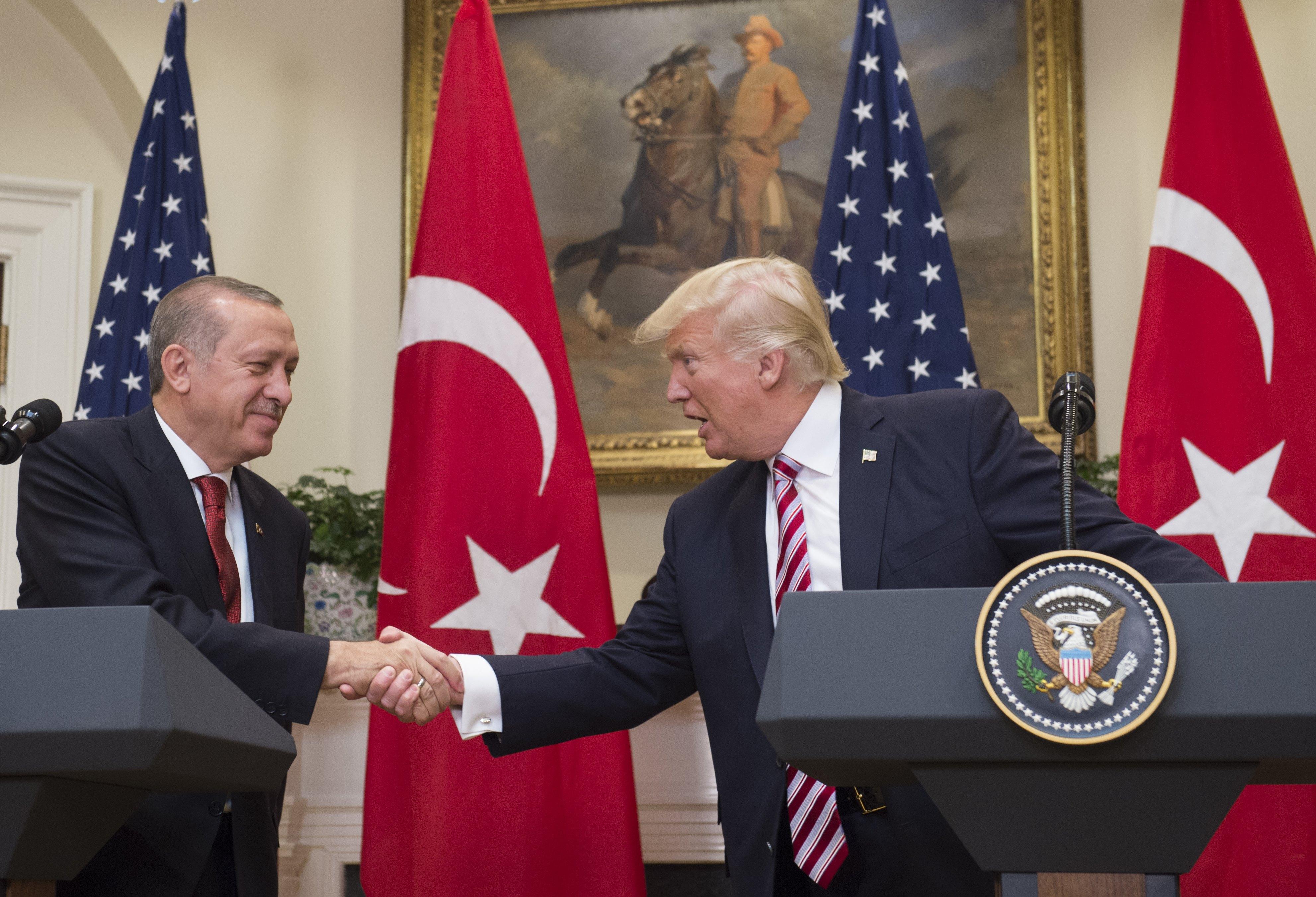 President Trump welcomed Turkish President Erdogan to the White House on Tuesday, where the two leaders reaffirmed their commitment to combating terrorism and defeating the extremist group the Islamic State of Iraq and Syria (ISIS).

Mr. Trump told reporters the U.S. and Turkey both face a "new enemy in the fight against terrorism" and that the two "seek to face this threat together."

Ergodan echoed Trump's statements, saying "we are committed to fighting all kinds of terrorism that poses a clear and present threat upon our future."

"There's no place for terrorist organizations in the future of our region," added Erdogan.

The U.S. and Turkey have been at odds in recent weeks after the Trump administration said it would arm the Kurdish elements of the Syrian Democratic Forces (SDF), a move that seemed to snub Turkey, which doesn't want the Syrian Kurdish-led force to take the ISIS de facto capital of Raqqa, and has offered its own troops instead. During the photo op with Erdogan, Mr. Trump briefly offered his support of Turkey's fight against the outlawed Kurdistan Workers' Party, or PKK, which is on the State Department's list of Foreign Terrorist Organizations. The SDF fighters are viewed by Turkey as an extension of the outlawed Kurdistan Workers' Party, or PKK.

President Erdogan had promised to convince Trump to reverse his administration's decision during their White House meeting.

While neither leader would comment on the disagreement over the Kurdish forces, both appeared to agree on furthering cooperation in the realms of economy, trade, energy and defense.

Mr. Trump also offered his appreciation to the Turkish leader in "seeking an end" to the killings in Syria, saying the U.S. will "suppport any effort that could be used to reduce violence in Syria and create conditions for a peaceful resolution."

The president said that he looks forward to achieving peace and security in the Middle East and "working toward a future of dignity for all our people."

Earlier, during their Oval Office meeting, Mr. Trump said the two leaders were going to have "long and hard discussions" that he knows will be successful.

"We've had a great relationship and we'll make it even better," added Trump.

Mr. Trump was asked by reporters following the statement about his alleged disclosure of classified information during his meeting last week with Russian Foreign Minister Sergey Lavrov, a meeting he on Tuesday called "very, very successful."

"As General McMaster said - I thought he said and I know he feels that we had actually a great meeting with the foreign minister, so we're going to have a lot of great success over the next coming years. And we want to get as many to help fight terrorism as possible and that's one of the beautiful things that's happening with Turkey - the relationship that we have together will be unbeatable."

Last month, Turkey voted to expand Erdogan's powers as president in a referendum that many critics decried as tainted.

Under the new political system, the president will be able to appoint ministers and senior government officials, issue decrees and declare states of emergency.

International monitors from the Organization for Security and Cooperation in Europe said the move undermined safeguards against fraud.

Mr. Trump drew ire for congratulating Erdogan's victory, critics saying that he was turning a blind eye to leaders who rule through autocracy.