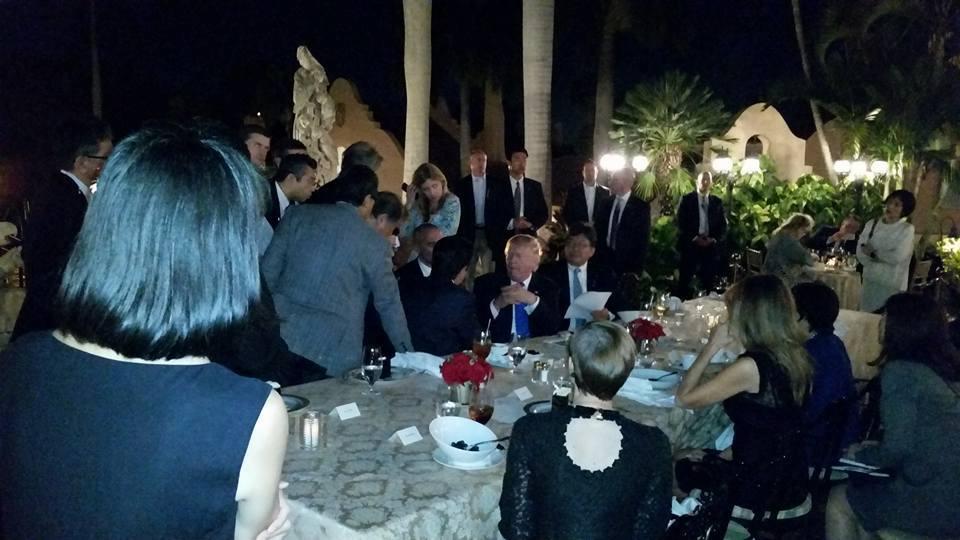 “That’s when I saw things changing, you know,” DeAgazio told the Post. “The prime minister’s staff sort of surrounded him, and they had a little pow-wow.”

He added that staffers used flashlights on their phones to light up documents for the leaders to look at. It isn’t known what Abe and the president were reading.

When asked about the reports WH press spokesman Sean Spicer said “The president was briefed in a classified setting (SCIF) both before and after dinner on the situation in North Korea.”

“HOLY MOLY !!!” DeAgazio wrote on Facebook, according to the Post, when he posted closer-up photos. “It was fascinating to watch the flurry of activity at dinner when the news came that North Korea had launched a missile in the direction of Japan. The Prime Minister Abe of Japan huddles with his staff and the President is on the phone with Washington DC. the two world leaders then conferred and then went into another room for hastily arranged press conference. Wow.....the center of the action!!!”

Though the president was among guests at Mar-a-Lago, it does not mean that club member have open access to him. One member who did not want to be named told CBS News, “As a member you can dine within sight of him but he is always encircled by Secret Service, and the chances of him being networked are zero.”

DeAgazio also reportedly posted a photo with the man who he said carries the nuclear football.

CBS contributor Michael Morell, who was a former acting director of the CIA, said the president’s military aide shouldn’t be taking photos with guests.

“That is less about security and more about trivializing the enormous significance of that young man’s job,” Morell told CBS News. “If I were his commanding officer, I would counsel him.”

After the news spread about North Korea’s actions, Mr. Trump and Abe delivered a brief on-camera statement in which Abe called the missile launch “absolutely intolerable” and Mr. Trump said, “I just want everybody to understand and fully know that the United States of America stands behind Japan, its great ally, 100 percent.”