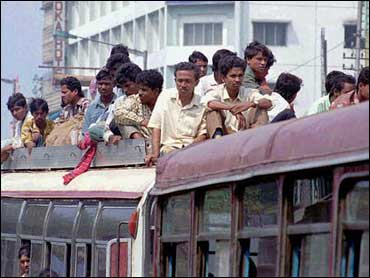 A large truck jammed with Hindu pilgrims on their way to a religious festival slammed into a gorge in northwestern India overnight, killing at least 85 people and injuring 64 more, police said Saturday.

Hours after the late-night crash, the truck's mangled remains remained at the bottom of the gorge, after exhausted emergency crews struggled to bring out the injured and the dead.

The accident occurred Friday night when the driver lost control of the truck while making a sharp turn near Nagbavji village in rural Rajasthan state, said police official Rajiv Dusot.

The truck smashed through a concrete highway barrier and plunged 80 feet into the gorge, Dusot told The Associated Press.

The 12-wheeled truck, normally used to haul large containers, had been carrying at least 149 people. The truck's owner had offered free rides to pilgrims on their way to the festival, police said.

Such trucks routinely carry passengers in many parts of India, even though they are not equipped to do so.

The local government has ordered an inquiry into the accident, Gulab Chand Kataria, the state's home minister told the CNN-IBN television channel.

Rescuers using cranes and searchlights recovered 85 bodies overnight, Dusot said. Another 64 people were hospitalized with injuries, with three of them in critical condition, he said.

The passengers, from three adjacent villages, had been making an annual pilgrimage to Ramdev temple, which is revered by both Hindus and Muslims.

Nearly 250,000 people visit the shrine during the 10-day pilgrimage each September. This year the festival is scheduled to start Sept. 13, but pilgrims usually arrive several days in advance.

The temple is especially popular with poor and low-caste Hindus because the temple deity, Baba Ramdev, is believed to be the patron of the downtrodden.

Overcrowded vehicles are a major danger in India, and road accidents caused by reckless driving, aging vehicles and bad roads are common.