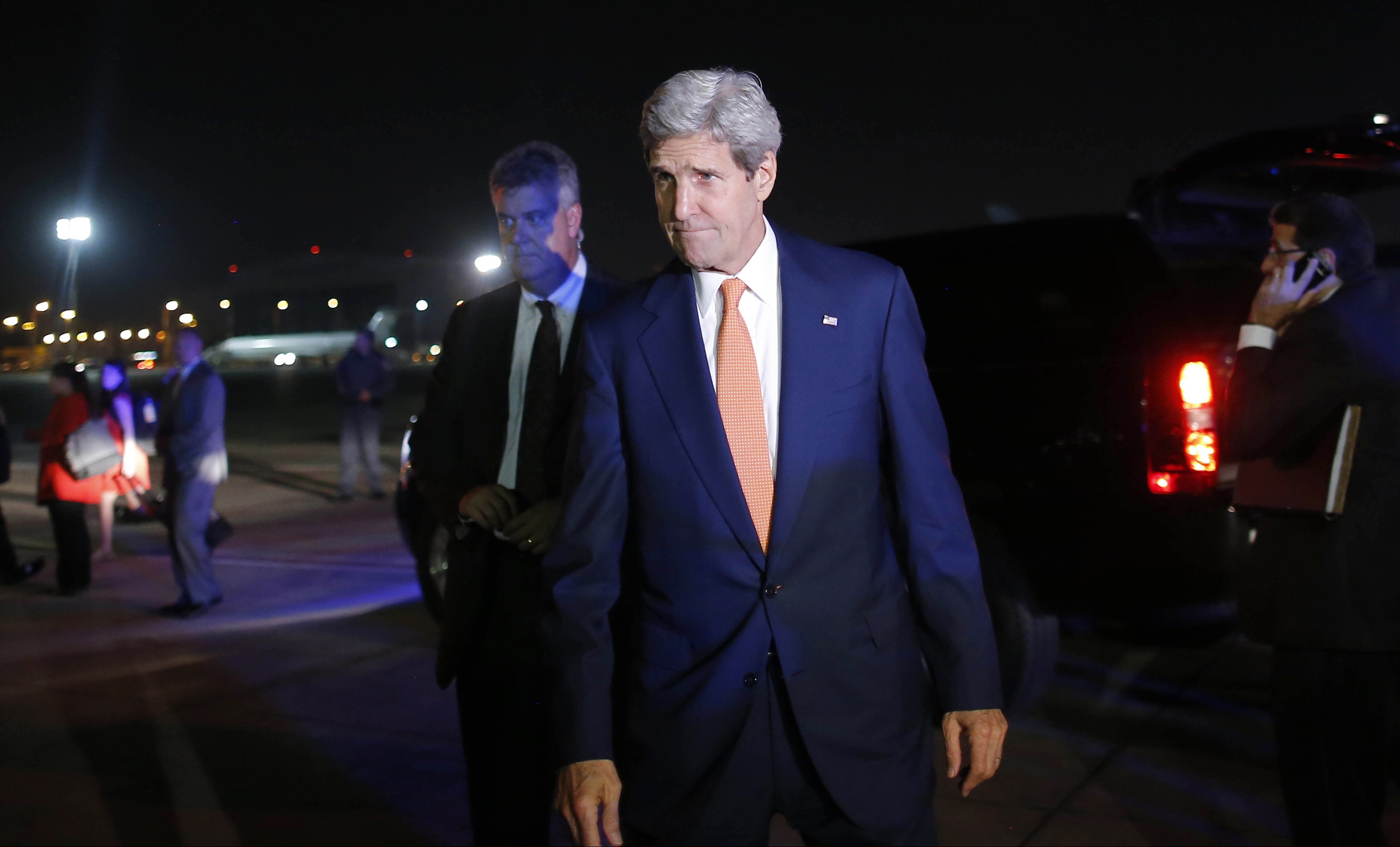 An apparent Israeli strike on a school sheltering Gaza evacuees who had fled their homes killed and injured many civilians according to the United Nations Relief and Works Agency has added further pressure to Secretary of State John Kerry's stalled mission to get both Hamas and Israel to agree to even a temporary halt in hostilities, something neither side appears willing to do.

Kerry worked the phones and held meetings with key aides at his hotel in Cairo on Thursday, which has become home base for his diplomatic efforts.

At the center of negotiations to end the ongoing war in Gaza is the question of a seven year long Israeli blockade and a tightly sealed border with Egypt that has kept nearly 2 million Palestinians trapped in a 140 square mile patch of land, many of them now caught in the crossfire of Hamas rockets and an Israeli military incursion. Hamas, which governs Gaza, is financially and political strapped due to the blockade. According to the Palestinian Central Bureau of statistics, the unemployment in Gaza among graduates aged 20-29 years reached 64.9 percent in 2013.

If he can first convince both sides to hold their fire, Kerry wants to find a way to relieve the pressure of this humanitarian crisis in a way that satisfies Egyptian and Israeli security concerns while also avoiding the appearance of bending to a key Hamas demand. Despite 72 hours of whirlwind diplomacy, negotiations to do so appear stuck even though Kerry claimed on Wednesday that "some progress" had been made.

Yet one de facto blockade that became unstuck on Thursday was the FAA ban that halted U.S. flights into Israel after a Hamas rocket landed earlier this week about a mile away from Ben Gurion airport in Tel Aviv. The FAA reversal - a decision made by aviator regulators not peace negotiators - came just 36 hours after the agency enacted it. In a statement, the FAA said it repealed its ban after it had "carefully reviewed both significant new information and measures" provided by the Israeli government to "mitigate potential risks to civil aviation."

But ending an Israeli blockade of Gaza, which includes a ban on fishing and closure of key passageways - as well as opening the Egyptian border crossing of Rafaa - is far more complicated. Both the Egyptians and Israelis fear that allowing in food and medicine into Gaza, will also risk giving Hamas the chance to smuggle in more weapons.

Kerry held lengthy meetings with the head of Egyptian intelligence in Cairo as they try to hammer out a compromise that would mitigate the security threat. Previous agreements such as the one that halted the last flareup in 2012 were crafted to allow for the opening to happen in a phased, limited manner. Right now, Egyptian officials are hesitant to do so and would likely face an influx of refugees who would come streaming out of the Gaza warzone.

Dealing with these complex security issues is why the intelligence chiefs of Egypt, Israel and Palestine are all deeply involved in the talks though doing so from behind the scenes. Hamas leaders reportedly met earlier this week in Cairo with the Egyptian and Palestinian chiefs earlier this week. Complicating matters is the fact that the Israelis and U.S. do not speak directly with Hamas, which is why Kerry spoke on Thursday with top diplomats from countries that do including Norway, Qatar and Turkey.

Kerry also spoke with Israeli Prime Minister Netanyahu on Thursday, a day after a visibly tense face to face meeting during a brief stop in Israel, in an effort push along a deal to end the bitter fighting. The Israeli military is expanding its military campaign in Gaza, specifically to destroy Hamas' tunnels. This is happening despite the Obama administration's belief that Israel has seriously degraded Hamas' military capabilities and that the resulting fighting has left just too many civilian casualties. Hamas' leader Khaled Meshaal publicly rejected the idea of a ceasefire and said he will not agree to a halt in firing while Israel's blockade and offensive continues.

As the body count continues to rise, U.S. negotiators remain stuck between two sides who appear willing to stomach further bloodshed - but unwilling to compromise.